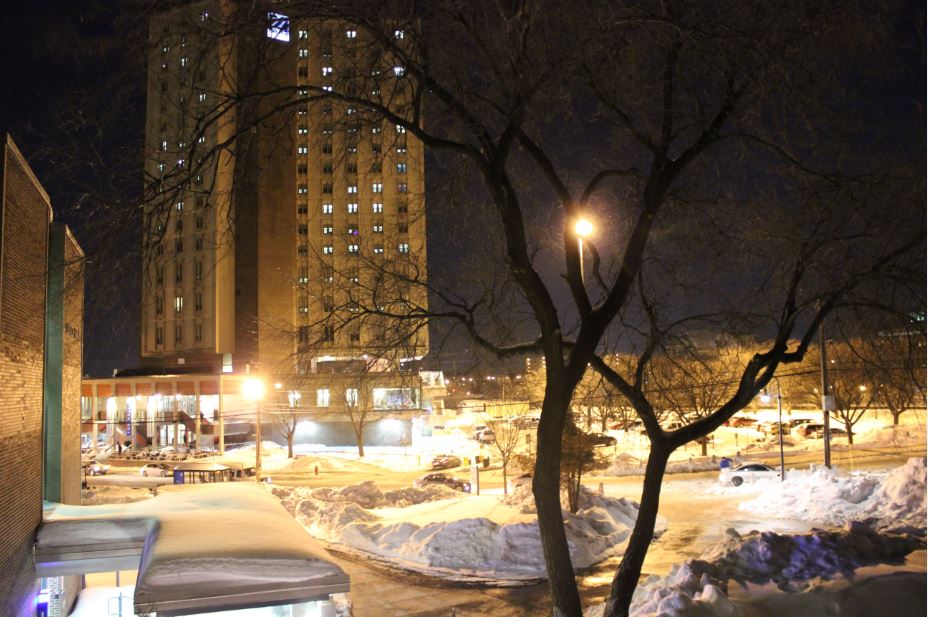 Housing selection for students, with options from University Suites to the Inn and Conference Center, started last Wednesday and runs through this week. Two of next year’s most notable housing changes are the additions to Riverview Suites and that next year will be the last that year that Concordia Hall is available.

The two freshmen halls on campus include the towering Fox Hall and quaint Leitch Hall. Sheehy Suites and the Inn and Conference Center were also open to freshmen in the 2014-2015 school year.

Fox Hall has a whopping 18 floors, 14 of them holding residences. Within Fox Hall is the University Dining Commons, Fox Common Nightlife, P.O.D., Sal’s Pizza and Taco Bell. Tutoring is also offered on the first floor.

Leitch and Bourgeois halls are mirror images of each other on East Campus. Leitch holds only freshmen, while Bourgeois hosts upperclassmen.

Leitch Hall is home to the Freshman Honors Living and Learning Community (LLC). Both halls are on the smaller side, with 4 floors and a basement which also houses students. Only double and quad rooms can be found in these two halls.

“I really liked living in Leitch,” said Erin Bishop, a current Leitch resident. “The space itself was really nice and clean and it had a good environment with adequate space to do school work and socialize.”

With many students on her floor in the program, Bishop said she was easily able to find study groups and people to do homework with.

University Suites on East Campus are also a fairly new addition, which opened in 2013. Although University Suites doesn’t have private kitchens in each suite, it has Hawk’s Nest on the first floor and hosts multiple organizations and clubs on campus.

It has 4- and 6-person suites that each include private bathrooms and common areas. Convenient for studying, USuites has study rooms and common rooms on each floor for students to socialize and get work done efficiently.

Right across from the Campus Recreation Center, it is convenient for students looking to get in a good workout or fitness class. Because USuites is so close to Fox Hall, it has all the same dining options, allowing students a variety of food to choose from.

Donahue Hall holds the only other suites on East Campus, featuring four-, six- and eight-person suites, each with their own common area and bathroom. Located behind Leitch and Boug, across the street from Fox, it is a great place if you’re looking to go to the dining hall or the CRC. Its placement is convenient for students, with a bus stop and Fox Hall within a minute’s walk.

“It was pretty good,” said former resident Ryan Perry. “I enjoyed the privacy. Also, we had our own bathroom in our room with 2 showers for 3 people.” Perry enjoyed the quiet that the building offered, making it easy to sleep and a great place to study and get work done. Although he felt the rooms were extremely segregated from each other, he enjoyed the room he lived in.

South Campus boasts the newly-added-to Riverview Suites. Although slightly distant from the rest of South Campus, Riverview is a prime living space. Inside is a gym for students to work out or take various fitness classes.

Suites in Riverview hold either four or six students, with a common area, a fully functional kitchen and a private bathroom. The new suites added on for next year do not include a kitchen in each suite, however.

“It’s pretty great,” said current resident, Scott Symonds. “I love having the gym on the bottom floor, and it’s nice to have such a large parking lot out back.” Although Symonds liked the apartment-style layout of his suite, he won’t be living in Riverview again next year. Because most of his friends are graduating this year, he said he’s choosing to move off campus.

Sheehy on South Campus also took in freshmen this year, housing mostly nursing majors in the Heath and Environment Academic Living and Learning Community (H.E.A.L.L.) Sheehy is made up of suites holding either four, six or eight students. Close to Mill City Restaurant, Hawk’s Nest and Subway, it’s never challenging to find food close to home. It’s also right next to O’Leary Library, which is great if you need to find a good place to study or get work done. On nights and weekends, a shuttle stops right in front of the residence hall for easy mobility around campus.

“I was definitely spoiled,” said current Sheehy resident Sam MacLean. “I live with three other girls, two per room, and we have our own common room with a private toilet and shower.”

MacLean plans on living in Riverview Suites, next year’s home to H.E.A.L.L., so that she can continue to live with others in her major. She found living in the LLC to be a big help academically because she had so many people around her all taking the same classes.

Attached to Sheehy is Concordia Hall, the only residence hall to feature single rooms. Located next to the historic Allen House, the 2015-2016 school year is the last time UMass Lowell will see the building stand.

The only off-campus residence hall is the Inn and Conference Center (ICC) which was home to both lower- and upperclassmen students in the 2014-2015 school year. What used to be just a hotel was partially converted into a comfortable place for students to live in downtown Lowell. The ICC holds its own dining hall, making meals convenient for students. There is busing from the yellow line all day and all night, helping students to get to class more easily and to see friends on other campuses.

The ICC’s location allows students to explore downtown Lowell. With many bars and night clubs, the ICC is a great place to live for those who are 21 and older. However, the under-21 crowd can also go to the various shops and cafes in downtown, like Brew’d Awakening Coffeehaus and Humanity Clothing and Accessories.

Other than on-campus dorming, UMass Lowell has off-campus student apartments. These include East Meadow Lane apartments near North Campus, which get their own busing from the green line, and Moody Street apartments near UCrossing. With personal bathrooms, living rooms, kitchens and bedrooms, these apartments certainly go quick with the limited space they have. Many can appreciate the apartment-style living. These student apartments still have resident advisors, helping in making students feel comfortable and safe in their living situation.

Many students also choose to live in apartments off campus and commute. Some do this to save money and others to escape certain restrictions of living in residence halls, such as quiet hours.