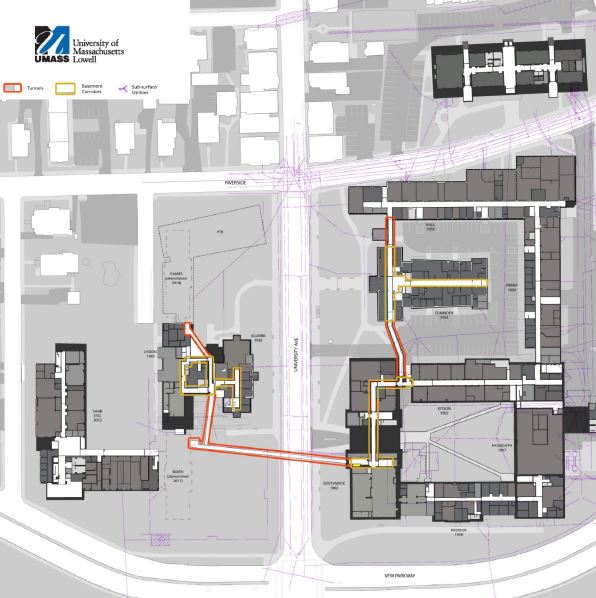 The pedestrian tunnel system beneath North Campus has long been a means of intercampus travel, as well as a defining feature of the architecture there.

While the tunnels are older than 60 years, their purpose has not been antiquated. The underpass system, which primarily conveys steam heat, was developed during the 1940s. During this time, this part of campus was known as the Lowell Textile Institute.

The tunnels were originally designed as part of the utility system, which serves primarily to convey steam. Peter Brigham, assistant director of campus planning at UMass Lowell, said, “We have a North power plant that supplies steam heat to most of North Campus.”

Students and faculty are able to pass through these tunnels to get them to different locations on North Campus. “The traditional practice when you build steam lines is to build tunnels so you can access the lines and fix them,” said Brigham. Vents run along the sides of the tunnels, indicating where the steam lines are.

In January of 2014, a Starbucks was opened on North Campus, located under the Lydon Library. One tunnel, which leads there, is painted with coffee beans, directing pedestrians to the business. Leo Cruz, student, said, “Whenever I go to the library or Alumni Hall, I’ll hit up Starbucks beforehand.”

South campus majors often aren’t familiar with the tunnel system, only to discover it later on. Duffy didn’t know about the tunnels until a year after attending UMass Lowell. “I was really late about finding out about the tunnels, and then I could never find them,” said Duffy.

Many just happened to stumble upon them. “Freshman year, I remember I was walking around…and then I saw something…and was like Oh, there’s a Starbucks trail so I just followed it and ended up over here in Southwick,” said student Andrew Pothier.

When walking through the tunnels, one may notice a slope that drops at certain points in the hallways. This slope was designed to accommodate the utilities that lie above the tunnels, including the water, sewage, electric and IT services underneath University Ave. “The low point is about 20 feet below the surface of University Ave. The roof of the tunnel is about 10 feet below the surface that the cars travel on,” said Brigham.

As for the new construction on campus, Pulichino Tong, the business building scheduled to open in 2017, will be a first floor connection from Lydon Library.