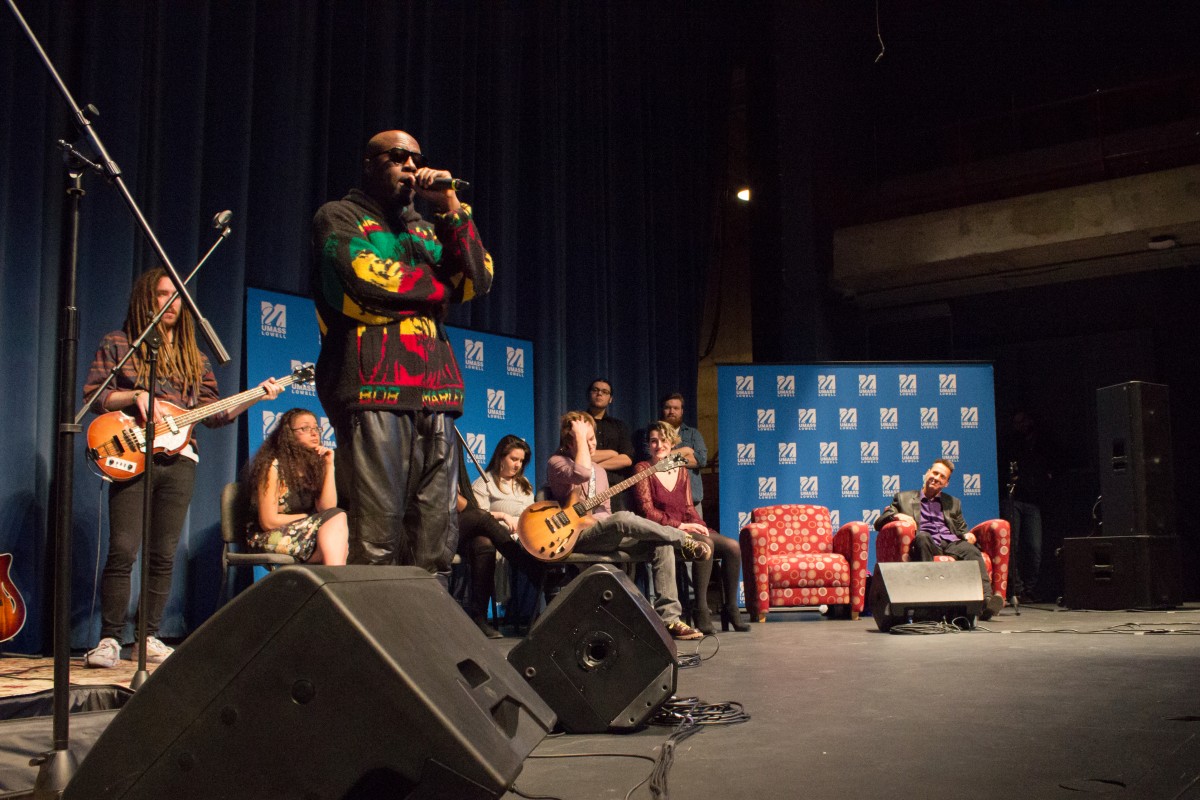 On March 1st, three-time Grammy award winner, songwriter and musician Wyclef Jean visited UMass Lowell’s Durgin Hall. Jean led a master class for music students, listening to various performances in search of promising talent that he will collaborate with as part of his new mixtape “Wyclef Goes Back to School.”

Jean’s visit to UMass Lowell was conceptualized by Rachel Driscoll, Jean’s tour manager. Driscoll, a native of Sutton, Massachusetts, graduated from UMass Lowell in 2017 with a major in Music Business. During her time at UMass Lowell, she completed an internship with Jean’s company and was hired afterwards.

Junior music business student Andrew Nugent was one of ten students selected to perform in front of Jean. Nugent performed his original acoustic solo “It’s Time to Fly.” Nugent taught himself how to play guitar at the age of 15 when the guitarist in his band suddenly quit. Now, he credits Jean as one of his influences.

“I’ve always been a big fan [of Jean], he had this song Sweetest Girl which always stood out to me because it was one of those rap songs that didn’t have the same sound as the others,” said Nugent.

“They get to see not only a successful musician but someone who really cares and who is really concerned with making sure there is a path for others to follow. I think you can sense that by the way he was interacting with the students and I think this is something that the students are going to remember for the rest of their careers,” said Falcón.

One of the highlights of Jean’s master class was his performance of “Sak Kap Fet,” a song he dropped a day before as part of his new mixtape. In addition, Jean performed his song “If I Was President” that students enjoyed.

“If I was president, I’d get elected on Friday, assassinated on Saturday, buried on Sunday, they go back to work on Monday,” said Jean referencing his failed presidential run for the Republic of Haiti in 2010.

In 2017, Jean released his seventh studio album “Carnival III: The Fall and Rise of a Refugee.” After Jean’s visit to UMass Lowell, his Carnival Tour made a stop in Boston at The Wilbur in Boston.

Toward the end of his master class, Jean had a few words of advice to all the students as music department chair Alan Williams hands Jean a customized UMass Lowell ice hockey jersey.

“Music changes every day, every day is something new. But quality music is always going to last,” said Jean.