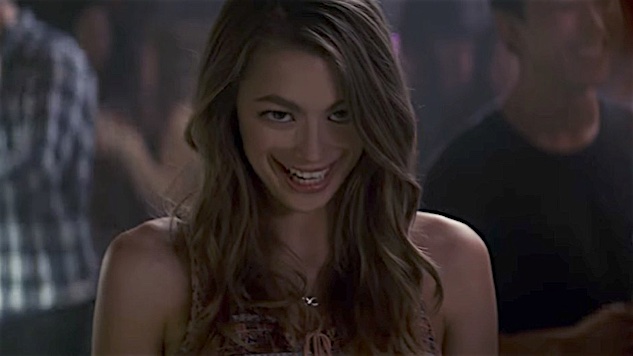 Director Jeff Wadlow was hired after he came up with an idea for the movie’s opening scene. (Photo courtesy of Universal Pictures)

After a group of friends play a game of truth or dare in an old church in Mexico over spring break, the friends discover that the game has followed them home. They must tell the truth or do the dare, otherwise they die.

The movie’s main problem is revealed right off the bat, and that is that none of the characters are likable or well developed. The opening scene of the movie is a group of friends convincing the movie’s main character Olivia (Lucy Hale) to come with them to Mexico for spring break. It uses this opportunity to give Olivia’s only two character traits, that she likes to help people and she has feelings for her best friend’s boyfriend, and then it cuts to a montage of the friends fooling around in Mexico. The development of these characters and their relationships is all rushed and just shown through this montage as the movie is only interested in getting these vessels (and that is what they are, because they are barely characters) to play truth or dare so that they can start being killed off.

The one thing that the movie does to try and get the audience invested in these characters is to make the emotional core of the movie the friendship between Olivia and Markie (Violett Beane) and the love triangle with them and Markie’s boyfriend Lucas (Tyler Posey), but all of this information is poorly given out and since the only real sense there is that Olivia and Markie are friends is the first scene of the movie and how they keep saying through dialogue that they are good friends, the emotions are hollow.

Now that this group of characters who can die without much care from the audience are being followed by the game, the embarrassingly bad horror elements begin to get implemented. The movie has dumb jump scares, but it goes far beyond that. Before a character has to choose truth or dare, a nearby person’s face will have an awful looking CGI smile edited onto their face, and it is more comical than scary. As a character even says in the movie, “It looks like a bad Snapchat filter.” Then a convoluted story about a demon is introduced, which just serves to bog the story down and add 10 extra minutes.

Just to go on a quick tangent about the demon, it should be noted that “Truth or Dare” could not even name a demon well. The name of the demon, Calex, sounds less like a demon’s name and more like the name of a character in “Star Wars.”

This addition of the demon story line helps to underline just how lacking in ideas “Truth or Dare” was. It seemed like every few steps of the way, the screenwriters had to change something to keep the movie fresh. For example, half way through the movie the game changes so that the characters can only do truth twice in a row. Why? Because the writers came up with some reason why and made it a rule to add tension and stakes to the film. The ultimate climax of the movie is also another situation where the rules suddenly change, which ends up robbing the finale of sort of weight it could have had.

The arbitrary creation of story elements to keep the movie fresh is annoying in its own right, but what is really bad is when the movie just starts tossing out its rules for the sake of plot convenience, which is very much present towards the second half of the movie. For example, the rule is that to survive the game, the person playing has to tell the truth or do the dare. However, some characters’ dares are to try and kill other players, and sometimes the demon just takes control of a character in order to kill another character.

“Truth or Dare” was a monumental failure of a horror movie. Bad scares, bad characters and bad story telling all came together to form a bad horror movie.