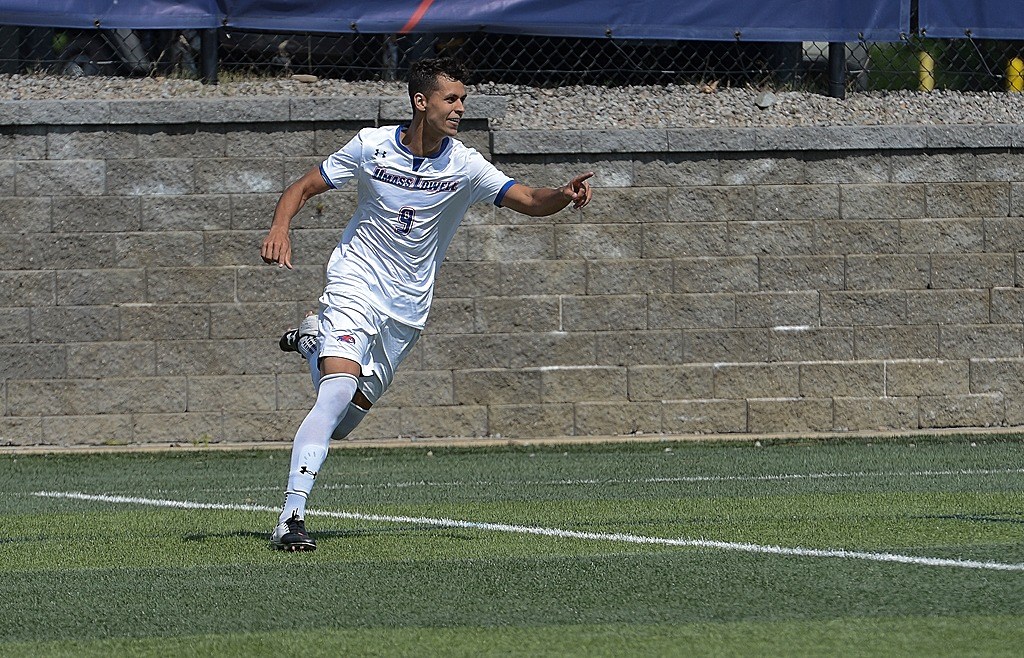 Strong performance on both ends of the pitch Sunday at Cushing Field exemplified precisely why the 22nd ranked UMass Lowell men’s soccer team is favored to win the America East Conference.

Shutting out the Northeastern University Huskies (1-4-1), the undefeated River Hawks (5-0-1) tacked a 4th win on to their season-opening win streak.

“I thought it was a good performance by our guys. To get another clean sheet is really important to us. Northeastern, I give them credit. They gave us a tough game… to play 90 minutes against them is a challenge,” said UMass Lowell head coach Christian Figueroa.

Northeastern brought that challenge with a strong presence early in the first half, taking play to UMass Lowell and maintaining possession for much of the opening minutes. For their troubles, the Huskies came away with two shots in their opening attack and four on the half.

Play in the first 45 shifted dramatically, however, in the 21st minute when the River Hawks registered their first shot on net; a goal from junior forward Stanley Alves.

Alves’ shot just beat the diving freshman goalkeeper for the Huskies, Chandler Cree, to the bottom right corner. The assist, a through ball from across the pitch, was credited to junior back Ivan Blaskic. The goal, Alves’ fourth of the season, not only gave UMass Lowell the early 1-0 lead but also brought with it an energy that would remain with the River Hawks throughout the game.

“It’s a back and forth game early on. Northeastern came out with a lot of energy. They had a game plan. But I think our guys were patient enough to figure things out and make the adjustments,” said Figueroa, “Any time you get scored against it deflates you a little bit, and that played a big role.”

UMass Lowell proceeded to set the pace and dominate possession well into the second half where they came up just short on numerous rush attempts and staved off several key chances for Northeastern to knot the game at one in the final minutes.

Once again in the second half, Northeastern outshot the River Hawks, this time by a 6-5 margin, but UMass Lowell remained unscathed; thanks in large part to the play of senior goalkeeper Zach Rowell.

Rowell, who did not see the field in the 2017 season, has been a key figure on the back end for the River Hawks early on this season. With 525 minutes and six starts already under his belt this year, Rowell has allowed only one goal against and sports a .917 save percentage.

“He’s done a great job from the beginning. Really stepping in with a group he has known for the last couple years which helps a lot. But to be able to come in with the confidence, which you need in those positions, has been really important for us,” said Figueroa.

The River Hawks look to carry their winning energy with them as they set their sights on a brief road trip to California this coming week. While on the road, UMass Lowell will take on tough opposition in the 25th ranked Stanford University Cardinals and University of California Berkeley Golden Bears.

“It’s a long travel… Being able to get some rest right now limit the knocks that we have and taking care of ourselves is important. We’ve got a tough opponent coming up in five days,” said Figueroa.