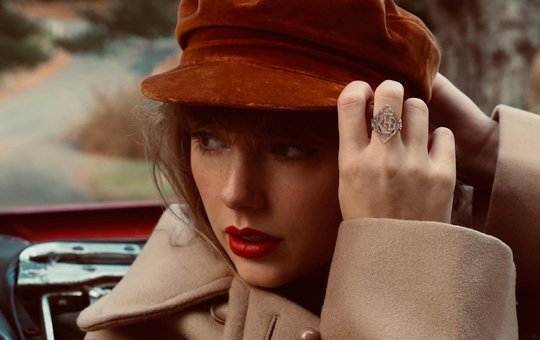 (Photo Courtesy of Kitty Committee) “Red” is Taylor Swift’s latest studio album and consists of several of her re-recorded hits.

“Red”, originally the fourth studio album by superstar Taylor Swift, is now the second re-recording in her push to get ownership over her music. Like the preceding “Fearless (Taylor’s Version)”, “Red (Taylor’s Version)” authentically recreates its array of classic songs, with even more captivating new additions.

“Red” has always been one of Taylor Swift’s best works, effectively blending country, pop, and rock to create a universally appealing soundscape, with some of the most incisive and relatable lyrics of her career. With “Red (Taylor’s Version)”, the production has been noticeably upgraded, with many of the songs sounding more consistently rock and singer-songwriter influenced.

The slower songs on the album witness a particularly noticeable upgrade, such as “Treacherous” and “I Almost Do”. The influences of the  production of her preceding “folklore” and “evermore” can be felt in these moments.

The biggest draw of “Red (Taylor’s Version” is the new ten-minute version of her acclaimed classic, “All Too Well”. While “All Too Well” was never a popular radio single, it has often been regarded by both fans and critics as the peak of her artistry, with some of her finest lyrics, and an emotionally charged delivery.

This new ten minute version transforms “All Too Well” sonically into something closer to an indie-rock ballad, and features the addition of an extension of the second verse, an expanded second chorus, a third verse after the bridge, a fourth verse, and an outro.

While this degree of song expansion, compounded with fan service over clamor for this long-speculated version, may often result in a disappointing result, this version lives up to the expectations and hopes set by the original classic. This deserves to be recognized as a classic of her discography.

The array of other new songs are equally compelling. “Message In A Bottle” is a pop radio smash waiting to happen, while the Chris Stapleton collaboration “I Bet You Think About Me” has boundless potential on country formats. Phoebe Bridgers gets a full verse on the emotionally striking and existential “Nothing New”, a rarity for female singers with a Taylor Swift feature, who are often relegated to backing vocals.

“Better Man” and “Babe” allow listeners to hear these songs sung by Taylor Swift for the first time, as they had been written by her and sold to country groups Little Big Town and Sugarland respectively.

One unique contributor to “Red (Taylor’s Version)” is the new producer Elvira. She has previously worked with Taylor Swift on a remix of 2020 hit “Willow” as well as a remix of her rerecorded version of “Love Story”. Here, she produces the new vault track “Message in a Bottle” and the deluxe song “Girl at Home”.

These two feature the most distinctive production flair across the entire album, with their upbeat synthpop approach providing a welcomed counter to the other often sad songs. “Girl at Home” is a particularly welcome surprise in this regard, considering the original version was one of the blandest songs on “Red”.

The one letdown across “Red (Taylor’s Version)” is her recreation of the original pop radio singles from the album. “We Are Never Ever Getting Back Together” in particular pales in comparison to its original version. She sings it more straight than sarcastic, which takes away its biggest appeal, and the production does not have the same intensity as the original.

This production issue reappears on “22” and “I Knew You Were Trouble”, albeit to lesser degrees. These three songs were all originally produced by legendary pop music producer Max Martin, who did not choose to return for “Red (Taylor’s Version)”, which is potentially a part of the reason for their quality decline.

However, these pop radio cuts contain very little of the central appeal of “Red” or “Red (Taylor’s Version)”. The emotionally charged and heavily relatable lyrics are and have always been the centerpiece of Taylor Swift’s career, and “Red (Taylor’s Version)” tugs harder on the heartstrings than ever before, cementing it as potentially the most classic album of her career.