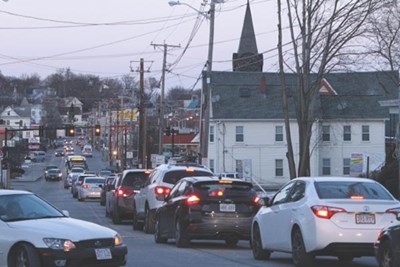 The bustling city of Lowell contains an estimated 14 miles of land, with just about a hundred thousand people living inside of it. Every day, people rush to school and work and go about their daily lives. The traffic that results makes it difficult for students to travel between campuses efficiently, especially when taking the shuttle.

Many students have trouble getting to class on time because of the traffic during their commute to campus as well as the traffic when they must take the shuttle between campuses.

“Ever since I started commuting, I have had to park at South Campus and every time I go on the shuttle, because my classes are on the North Campus, getting around takes a long time. The traffic is so bad,” said Shannon Calla, a second-year student.  This is the case for many commuter students.

Regardless of where students are commuting from, it can still be difficult to arrive on time because of traffic alone.

“I live 10 minutes off-campus, but I do feel that even though I live so close, I do have to leave at least a half-hour before class. That’s pushing it just because of the traffic,” said second-year student, Jessica Stromphe.

Commuting is made worse by road closures that create bottleneck traffic. What results is a very slow shuttle ride as these road closures involve bridges around campus which are key to getting around.

“There’s not many detours that our drivers could take in the case of traffic just because of the nature of the way the city is laid out. If one bridge is backed up, you don’t have another bridge to go over. There’s no way for our shuttles to physically avoid the traffic,” said Operations Manager for Transportation Services, Nathaniel Klosowski.

Students are encouraged to seek sustainable means of transportation such as continuing to take the shuttle.

“We know that when there are more vehicles on the road, it only heightens traffic concerns. So, a lot of folks assume that by taking their own vehicle, that they’ll get there faster. But that actually does lengthen the amount of time or sitting in traffic if folks decide to use single occupancy vehicles versus, you know, more sustainable options like busing,” said Assistant Director for Transportation Services, Carina Kruz.

Students are also suggested to allow themselves time to make the shuttles if they know they have somewhere to be.

“They should plan on traffic. It’s not going away,” said Kruz.

The university also has a Freewheelers Bike Share program where students can rent a bike and return it at check-out stations. This is a great option for students that are looking to avoid heavy traffic and get to their destinations quicker.

The traffic is expected to be relieved with the completion of road construction and closures. Transportation Services is working to resolve the issue so that students can travel to and between campuses faster and smoother.

“There are some bridge projects that are finalizing, and we hope that in a month when we’re having this conversation…that will have a little bit of a different tone in terms of speaking about the traffic in the city. So, we are very hopeful and excited for that,” said Kruz.