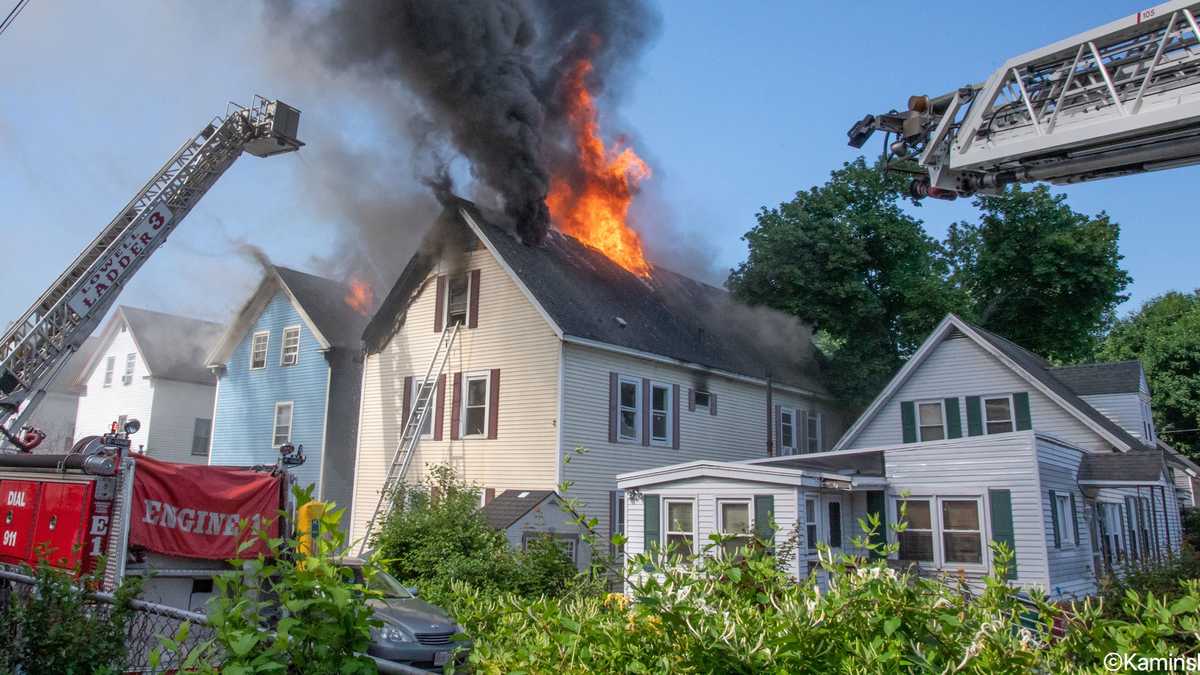 (Photo courtesy of WCVB 5 Boston)
In 2021, there was a major multi-house fire in Lowell on Clare Street, pictured here.

On November 9th, 2022, a fire burned down an auto body shop in Lowell. The fire released a lot of smoke into the air as it completely burned down the old building the autobody shop was in. According to an article published by Firefighter Nation titled “Fire Destroys Lowell (MA) Auto Body Shop”, the article states “People from all over the city, and as far away as Salem, N.H., reported on social media that they could see the heavy smoke rising from the burning structure.” Firefighter crews that were on-site used tons of water to douse out the flames that were out of control initially. According to an article published by Boston 25 Local News titled “Raging blaze reduces Lowell auto body shop to a pile of charred debris”. The article quotes Lowell Fire Chief Phillip A.J. Charron by saying, “’The pump trucks that are in operation, they’re basically maxed out, we pulled just about every line we could, grabbed from most of the area hydrants.”

Fires are devasting to everyone and everything involved. Though, there are examples that fires can sometimes play a regenerative role in an ecosystem, mostly likely they destroy the local ecosystem. The Lowell Fire Department had used a lot of water to prevent the spread of flames and to extinguish it. Additionally, the fire had released a lot of smoke and chemicals into the air posing a hazard to the residents and other wildlife in the area. The UMass Lowell Connector had sat down with UMass Lowell Associate Professor Lori Weeden of Environmental Earth and Atmospheric Sciences to discuss the environmental impact of the autobody shop fire on the Lowell community.

Weeden worried about the chemicals released into the air when objects in the building were vaporized after burning. “When a facility, like an autobody shop, [burns] there is no doubt in my mind that there are certain chemicals that went into the air when they burned,” said Weeden, “…air quality around a fire is always bad…imagine it’s not only wood that is burning, but everything is burning.” Since the entire autobody shop burned down, everything, which would include the paint on the walls, the metals of machines and the cement that is part of the foundation, would vaporize into smoke. Those chemicals from such objects are dangerous for people to inhale. Local news reported residents had difficulty breathing and a firefighter had to be evaluated on scene for medical reasons.

The local news reported it took several hours for the Lowell Fire Department to control and extinguish the fire. Firefighters had to use tons of water to achieve that end. How does the water used to extinguish the fire affected the Merrimack River? The water Lowell receives is supplied by the Merrimack River. Since the autobody shop fire was not large, relative to forest fires in California, it will not have a significant effect on Lowell’s water supply. “Here, our water comes from the Merrimack, so it is not so much of a big deal. We are never going to run into that problem [of running out of water] here even if the entire city were on fire… unless there was a huge drought that [dried up] the Merrimack River,” Weeden explained. Forest fires in California are extreme examples of when a fire is so powerful it can negatively impact a region’s water source and other wildlife dependent on it. Discussing the extreme example, Weeden said, “Out west when the fires are so huge, they can impact the water pressure [which affects] your ability to get water into your house. If much water is used… to fight some of these fires, [then] it can impact some of your water supply.” Less water in surrounding rivers, lakes and underground aquifers can impact the ecosystem. Most notably, the soil can be dried up from loss of water that it can cause additional problems for communities recovering from fires.

Soil in an urban setting will not have much effect on local ecosystems because there is not a lot of soil to begin with. When compared to a rural setting, fires can burn down soil and vegetation creating conditions that can cause mudslides. Weeden had said that fires can, “… remove vegetation through burning,” which the vegetation is, “the structure that holds the soil in place.” Giving an example, Weeden discussed how the Thomas Fire of 2017 led to mudslides. “A month after the fire, [Southern California] had record rain… Huge rainfall in that same area that had no vegetation on it [led to] deadly mudslides.” Burned soil can cause mudslides in rural areas if there are hillsides completely burned down with no vegetation surviving. Fortunately, Lowell does not have to worry about mudslides because there is not much soil around the city.