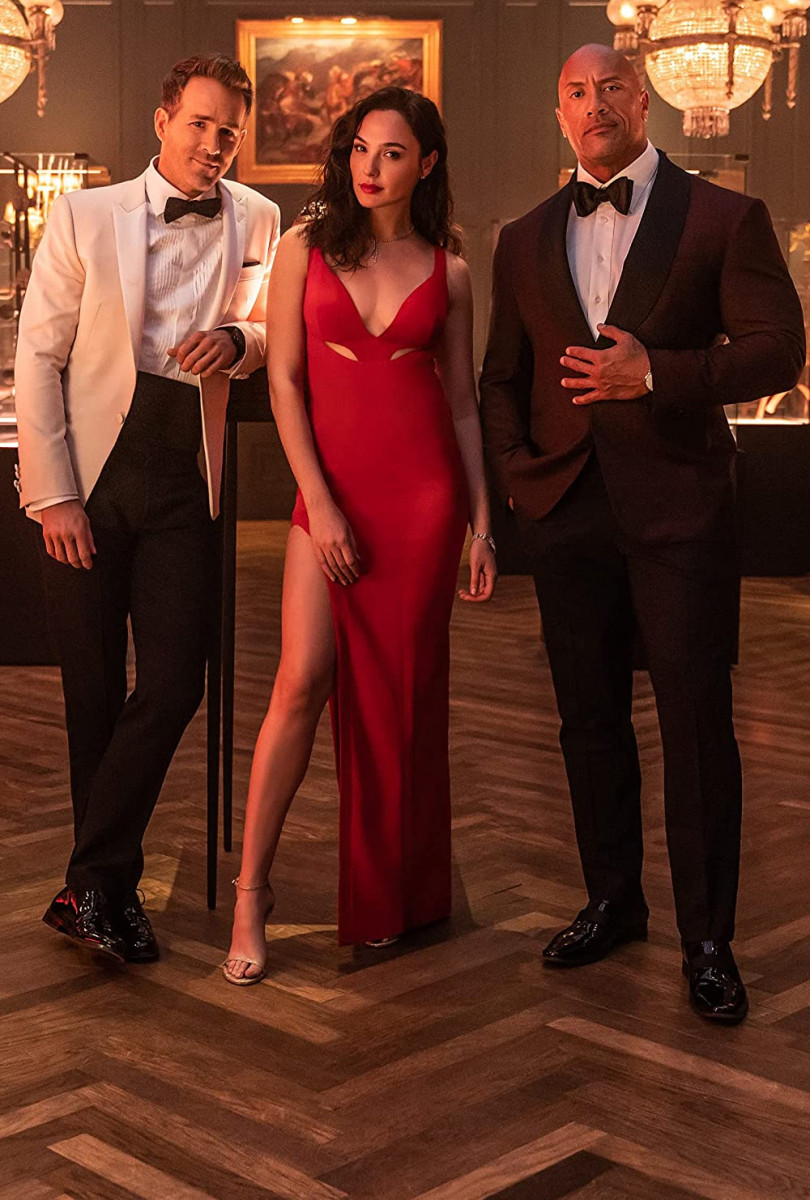 What do you get when you put Wonder Woman, Deadpool and The Rock in the same movie? The result is, unfortunately, a red-hot mess of embarrassment. But, with great star power comes great attention, and “Red Notice” is taking Netflix audiences by storm with its release on Nov. 5, 2021.

Directed by Rawson Marshall Thurber, “Red Notice” is about FBI agent John Hartley (Dwayne ‘The Rock’ Johnson), and his misfortune of being framed by the world’s greatest art thief, The Bishop (Gal Gadot). In the attempts to clear his name, Hartley teams up with the world’s greatest con-man, Nolan Booth (Ryan Reynolds), as they plan to best The Bishop at her own game.

Yet, with numerous twists and revelations loosely stapled onto this narrative, things are not as they seem.

Perhaps a generic set up, the execution of this film could have succeeded despite a lack of originality. But, with various overused plot points and cliche relationship tropes, the story falls flat and charges the audience to suspend far too much disbelief.

Of course, a film with the tone of an action buddy heist comedy isn’t meant to be taken so seriously; there are probably those who actually believe that The Rock could survive the blast of an RPG, even if he were standing just several feet away. Even if he could, it’s even more unrealistic that he would be able to jump right back into action seconds later.

This type of writing is incredibly problematic throughout the movie. One should expect better in terms of action, especially for a film with a $200 million budget at their disposal. Instead, the movie offers cheap gags, which although funny at first, do not suffice for a lack of dynamic scenes.

When the action does ignite, it is drawn together with an obvious artificialness. Perhaps in the midst of filming during a pandemic, the filmmakers did not have access to organic locations, so it may be justified why the film looks as fake as it does.

Putting this artificial feel aside, it is not a particularly good excuse for a large number of sequences that most likely didn’t need to be filmed on location, but rather a proper studio set instead of the obvious green screens used.

Without spoiling the action pieces that are intertwined into the narrative, many of the sequences that are meant to be show-stealing, also contribute to making this film’s narrative feel incredibly out of place in its latter progression. Perhaps “Red Notice” was intended to be a buddy action heist comedy, but it really starts to feel like something out of an Indiana Jones adventure by the end.

This may sit well as a sense of diversity for audiences who value entertainment, but from a more critical perspective in storytelling, that alleged diversity really just feels as if the filmmakers were scraping the bottom of the barrel for ideas on how to construct a climax and denouement.

The results of craftsmanship conclude in an unoriginal, uneven and generic narrative, where the weight of the twists is left feeling floaty without the film managing to accomplish much at all. Not even the trio of A-List superstars could save the day this time.

Perhaps Gadot and Johnson did the best they could with their performances, given the mediocre script they were working with.

As for Reynolds, it seems to be a trend following his previous roles as Deadpool and Pikachu, that he ends up playing himself rather than slipping into the actual character. It certainly made for top-notch entertainment in those movies, but in “Red Notice”, that act has really started to tire out where the chemistry between his Nolan Booth and The Rock’s John Hartley isn’t so much banter as it is annoying.

Overall, if audiences are looking for films of this lighthearted narrative with a softening comedic tone, they are better off watching “Central Intelligence”, or “The Hitman’s Bodyguard”, where Kevin Hart and Dwayne Johnson, as well as Ryan Reynolds and Samuel L. Jackson, make for far better bantering duos caught in the midst of far more organic storytelling and action.

If audiences are looking for a proper heist film, “Ocean’s 11” and “Ocean’s 8” are superior, perhaps even the recently released “The Misfits”. As for “Red Notice”, it fails to deliver on just about all the elements of its genre. Unless one is a die hard fan of the cast, audiences are better off watching something else in the genre with greater quality in the slightest.