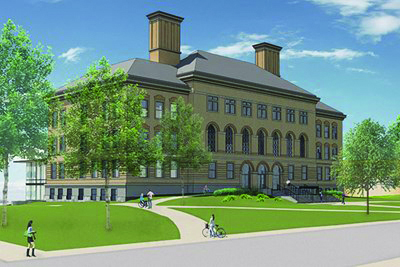 (Photo courtesy of UMass Lowell) The School of Education offers four-year undergraduate program leading to the degree of Bachelor of Arts in Education with two licenses. All students must complete course work for both licenses: Elementary (grades 1-6) and Moderate Disabilities (grades PK-8).

The education department at UMass Lowell faces an ever-changing retention rate. Throughout the semester, there are many students who leave the program. But why do these students leave, and where do they go?

The program itself just had its first class of students graduate in 2020, so there are not a lot of statistics to base the retention rate off of. Along with the program being fairly new, COVID-19 had, and still has, a large effect on the education field.

“They might want to take a break right, so there were some students that took a break from college in general, right, who wanted to sort of pause, altering the typical statistics the school would have seen in a ‘normal year’.”  said Clinical Associate Professor and Co-coordinator of Bachelor of Arts in Education Dr. Eliza Bobek.

“Knowing students who transfer, again that’s going to be just informal anecdotal because they told us that they’re going somewhere else. And typically, when students go to other universities that would always have nothing to do with us right, it is location, it’s siblings, it’s boyfriend/girlfriend, it’s whatever.” Said Dr. Katherine Miller, a transfer coordinator in the BA Ed. Program.

Although there are students leaving the university and transferring to other majors, there is also a steady stream of students entering the education department, as well as students transferring in to the program.

“You know, generally, if students make it past like the first year, the second year…then they stick with it, right? They’ve been in schools enough; they’ve worked with students and kids and that’s something that they want to continue to pursue.” Said Bobek.

Dr. Miller, on the other hand, gives some insight on the numbers of which the students are leaving the elementary education and moderate disabilities major. Although the numbers are unofficial, the department has knowledge that out of 195 students who start in the program, only 26 of them transferred out, which does not consider where they are going.

There is data that supports findings that there are common majors the students who leave the BA Ed. Program at UMass Lowell are switching to. Some of these include psychology, business, English and history. Due to the licensure involved in the major, students may have entered the program without having the right knowledge of exactly what and who they want to teach.

When applying at UMass Lowell this program seems special, with a standard course load and the appearance of two highly marketable degrees, elementary education and moderate disabilities. However, a student’s degree pathway in the program is very strict, only covering courses that are necessary outside of the majors with very little electives.

Transferring into the program may not seem appealing, as some of the other courses and credits a student may have taken might not be transferred over, hence many students starting from scratch.

When asked whether both coordinators thought that retention rate was low, they both denied. Instead of focusing on who is leaving the program, they focus on who is still in the program and how they can make the experience better for those students.

Dr. Bobek, when asked what she would change about the program in order to keep the retention rate high, she said trying to support students was a priority.The school is already beginning to adapt by ridding the MTEL requirement before field work. She says that they are “…just trying to break down barriers and instead provide students with more support.”

Dr. Miller ends her interview by mentioning that she would not do anything to change the program to raise the retention rate. Instead, she says, “I don’t know that we want to keep the rate high. I don’t want somebody to be a teacher if they don’t want to be a teacher.”

There is always a need for educators, and the program wants to produce the best ones. With a licensing program so different to the others in Massachusetts, the Bachelor of arts in education students at UMass Lowell have a unique experience, one that gives them the support necessary to continue on with their education.