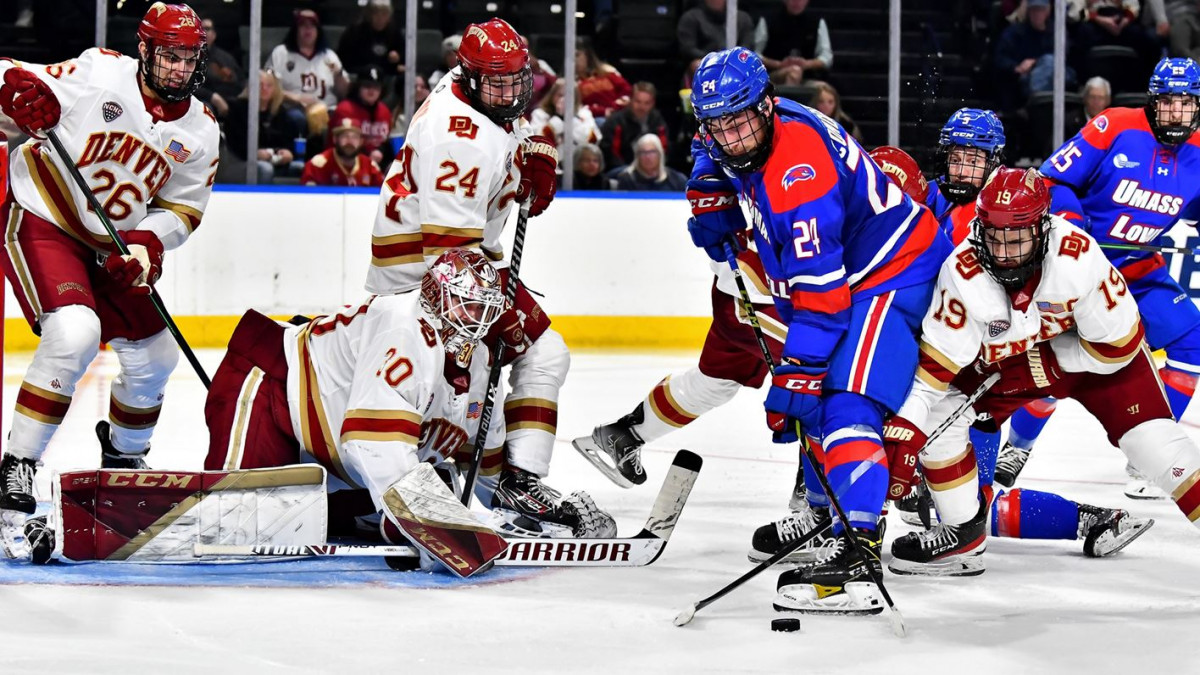 UMass Lowell’s men’s hockey team’s season came to an end last Thursday after a 3-2 loss to the Denver Pioneers in the first round of the NCAA tournament. Lowell went into this game as the underdog with it being their first appearance in the tournament since 2017. Before this loss, they were 5-0 all-time in the regional semifinals. Lowell’s final record for the season was 21-11-3. Denver went on to beat Minnesota Duluth and will play in the NCAA semifinals on April 7.

The first period began positively for Lowell with goaltender Owen Savory making a solid stop about five minutes in. A little bit later, Lowell’s Lucas Condotta scored off of a pass from behind the net by Reid Stefanson. The goal came around 10 minutes into the period and gave the River Hawks a 1-0 advantage. Denver scored with about one minute left in the period making it a tie game. The goal was a one-timer from Brett Stapely right in front of the net. The first period came to an end with a score of 1-1.

There was no scoring in the second period despite a fair number of penalties. Lowell was dubbed for three penalties in the period with Brehdan Engnum being called for tripping, Ben Meehan for hooking, and Nick Austin for slashing. The Pioneers were unable to capitalize on the power plays and the period ended 1-1. Lowell had a measly three shots in the period.

The third period of the game was rather eventful. About halfway through, there was a scrum between Denver’s Brett Stapely and Lowell’s Connor Sodergren. Sodergren cross-checked Stapely in the head who then went on to make a dirty hit on Sodergren in the stomach. Both were called for penalties, however, Stapely was called for a major and Sodergren a minor. Stapely headed to the locker room after the fiasco.

The ensuing four-on-three in Lowell’s favor ended with no goals. During the four-on-four, Denver was able to score with Carter Savoie sniping top-shelf on the far side. There was not much Savory could do to make the stop. This marked Savoie’s 21st goal of the season. The score was then pushed to 2-1 with Denver on top.

The next goal of the period came from Lowell’s Sodergren with just over five minutes left in the period. The goal came off of the kick of a teammate and tied the game up 2-2 with minimal time left. Unfortunately for Lowell, Denver scored the final goal of the night with around three minutes left. The shot was a one-handed reach out from Cameron Wright that barely snuck by Savory. Lowell went on to pull their goal to try to tie the game up with no avail. The game ended with Denver on top, 3-2.

On the game, Lowell’s head coach Norm Bazin said, “I liked the effort. I thought the guys left it on the ice. It’s a very classy group of seven seniors. I liked our start today. Our penalty kill was good. Unfortunately, we got caught killing off three in the second, and that zapped a little bit of our energy. Where we were in the third, I was pretty comfortable with it. We gave one up on the power play, and that was the difference obviously.”

Lowell will look forward to next season with plenty of time for rest. Hopefully, they will remake the tournament and make it further than this year.