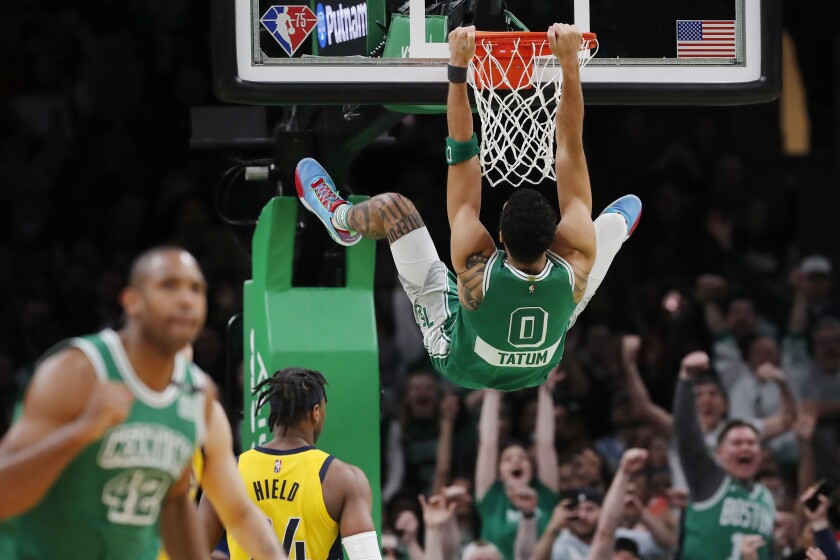 The Celtics’ most recent game was a 128-123 victory over the Indiana Pacers last Friday night. This marked the Pacers’ sixth loss straight. They currently have the fifth most losses in the league. Celtics’ stars Jayson Tatum and Jaylen Brown both scored over 30 points the eighth time this season. Tatum had 31 to Brown’s 32. Center Al Horford scored 17 points with ten rebounds leading to a Celtics’ victory. For the Pacers, Oshae Brissett and Jalen Smith scored 17 points apiece. However, this was not enough to defeat the dominate Boston team.

There were a couple of injury scares for the Celtics their past game. Both Marcus Smart and Jaylen Brown got minorly injured, but not enough for them to miss any future games. In contrast, player Robert Williams was seriously injured on Sunday with a torn meniscus in his left knee. He underwent a successful surgery; however, he won’t return to play until the second round of the Eastern Conference playoffs. Williams was the 27th pick in the 2018 draft for the Celtics and was initially signed for a four-year deal. He averaged ten points and 9.6 rebounds in his 61 games played this season.

On the injury, Williams said, “I was hurt … I was so hurt, because I knew something wasn’t right. I could tell it was something that was gonna stop me from playing. So I really didn’t even want to find out what it was at one point. Like, at one point, I was sitting on a bench, like the end of the third, and I knew something was wrong but I was so scared to even stand up.”

On a more positive note, Celtics guard Marcus Smart is a contender for this year’s defensive player of the year award. Other contenders include Milwaukee Bucks forward Giannis Antetokounmpo, Utah Jazz center Rudy Gobert, Memphis Grizzlies Jaren Jackson Jr. and the Miami Heat’s Bam Adebayo. Gobert has one the award three times in the past four seasons. The award has been historically difficult for guards to win.

Reiterating, this has been one of the closest playoff contests in Eastern Conference history. Entering last Tuesday, the top four seeds of the conference were within a single loss of one another. The teams included the Heat, the Bucks, the Celtics, and the Philadelphia 76ers. Rather fittingly, the Heat faced the Celtics and the Bucks faced 76ers in the past week. The Heat and the Bucks both won their games on the road.

Next up for the Celtics will be a showdown against the Washington Wizards on Sunday at home. Hopefully, they will pull off the win to be one step closer to earning a top seed for the playoffs.