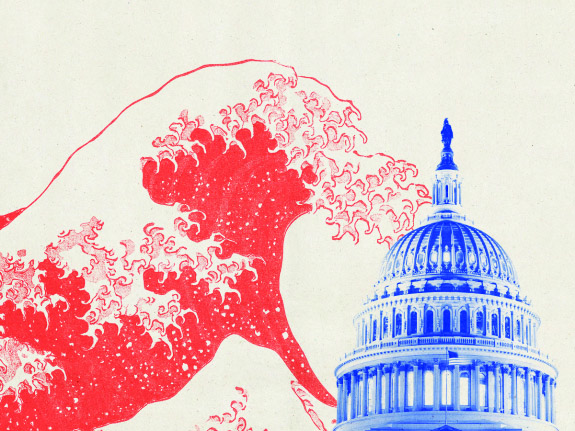 (Photo courtesy of FiveThirtyEight)
A proverbial red wave attempting to make a splash at the Capitol Building.

In a history-defying moment, the 2022 Midterm Elections turned out to be a massive victory for Democrats. Pundits have predicted that Republicans would sweep across the nation on November 8th, dominating the rest of Joe Biden’s presidency. On top of that, historically, midterm elections are usually devastating for the party in power. Democrats pulled a surprisingly decisive victory, winning key seats against Trump-endorsed candidates. The Republicans are expected to lose the Senate and only win the House of Representatives by a few seats.

In what was expected to be a terrible night for Democrats, election night proved to be a turning point in American politics. The biggest story of the night was the Senate. The Pennsylvania race captured national attention, pitting two opposites against each other. TV personality turned conservative politician Dr. Oz lost unexpectedly to the working-class John Fetterman, despite Fetterman’s health complications and lack of professionalism. In Nevada, Republicans were expected to flip the seat with Adam Laxalt, but Catherine Cortez Masto was barely able to hold on. The run-off elections in Georgia, between Republican Herschel Walker and Democrat Raphael Warnock, will determine if Democrats gain the majority. As of right now, polls lean towards Warnock.

Jason Carter, an adjunct professor for the College of Fine Arts, Humanities & Social Sciences at UMass Lowell, believes that the Democrats’ consistent strategy won them their victory. “The Democrats had a message and they stuck to that message…. it did not seem like the Democrats were reactionary as polls were starting to not look great for them,” said Carter.

Though Republicans managed to win the House of Representatives, it was much less graceful than expected. Republicans expected to take the House by a large margin, but that did not manifest. Republicans have now secured the 218 seats needed, but that is the bare minimum. With only five races left to call as of Friday, the Republican majority will be small. “Losing the House by one voter, by 30 votes, by 60 votes. They still lost the house,” said Carter. A few notable red gubernatorial races went blue, including Pennsylvania, Arizona, and Kansas.

Now that the midterms are winding down, politicians are looking forward to 2024. Despite the lackluster performance of his hand-picked candidates, Trump announced his candidacy last Tuesday, the 15th. The announcement comes as infighting begins within the party, with some of the voter base losing confidence in Trump and instead backing Ron DeSantis, Governor of Florida.

President Biden quickly addressed the country, taking credit for the victory, citing all the achievements of his administration thus far. He congratulated the party on the outcome while acknowledging that they still lost some desired seats. He defined this election as a referendum on democracy, furthering the messaging regarding the rise of fringe conservatives and the danger they may pose.

“I think if you’re the Democrats, abortion, protecting democracy and opposition to Donald Trump are all still salient messages. The Republicans… are going to try and move past 2020 and look forward. Anything that’s backward-looking doesn’t seem to be a good political message right now.”