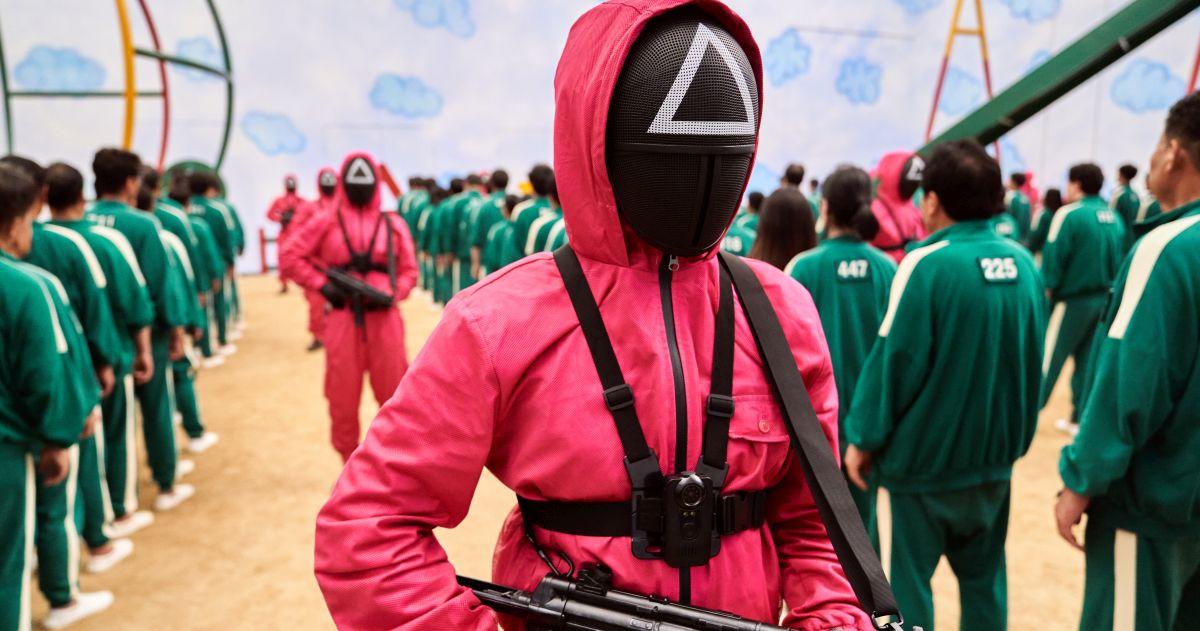 Korean thriller-drama series “Squid Game” became available to stream on Netflix in September 2021. It is captivating and intriguing online audiences even beyond the streaming service. “Squid Game” has, as of October 2021, reached more viewers in the month of its release than any other Netflix series.

Released a year after Bong Joon-ho’s Korean language thriller “Parasite” won the Academy Award for Best Picture, “Squid Game,” written and directed by Hwang Dong-hyuk, carries a similar theme of wealth inequality throughout the nine well-paced episodes. This resonates particularly well with American audiences who face the reality of wealth inequality in the United States.

The series title comes from one of the more physical Korean schoolyard games, in which players must fight until the last man is standing in a formation made of circles, rectangles, and triangles.

Season one follows Gi-hun, a paradoxical man-child living with his mother, practically being parented by his own daughter. He is constantly gambling, but still wants to support his family.

After having his life threatened for being unable to pay a debt, Gi-hun receives a mysterious invitation and takes the chance to win the money he needs to support his family by competing in a series of high-stakes children’s games, gambling with his life.

Gi-hun and the other 455 contestants are brought to a remote facility where the games are held, and the show’s set design is able to shine, or perhaps more accurately, strike.

The facility’s elementary-school like design perfectly contrasts the intensity and violence of the games. Massive play structures, a giant robotic doll, brightly painted walls and stairwells that look like MC Escher got his hands on some children’s blocks all create an incredibly uncanny atmosphere fitting for the suspense of the games.

These striking visuals likely contributed to the spread of “Squid Game” related memes circulating widely on social media. The set design serves for more than capturing attention though.

It illustrates the social class inequality with the scale of the games, showing the different levels of luxury afforded to the members of different classes: the participants, the workers, the boss and the VIPs.

“Squid Game” offers a range of fantastic performances from the cast of Korean actors, notably Lee Jung-jae, HoYeon Jung and Kim Joo-ryoung. The original Korean audio only emphasizes the quality of their performances, but the English dub aligns well with the performances and subtitles, providing an equally entertaining experience for those listening in Korean or English.

Lee Jung-jae’s acting performance sells the duality of Gi-hun’s childlike nature—despite the obvious negatives of his behavior, it is this nature that also makes him thoughtlessly generous, trusting, excitable and lovable.

Through his comradery throughout the games, particularly in his compassion for a sick old man he befriends, these positives are shown and support themes of the importance of friendship and love over money. In a way, all the game’s finalists are able to win because of Gi-hun’s compassion and generosity.

Well-written dialogue along with the quality performances addresses relationships of inequality related to gender, age and education that are particularly relevant. Sub-plots add more layers of interest giving insight into characters and the game, showing how it is run and who runs it.

Throughout the season, viewers see the characters grapple with their desire and desperation as they decide how much they are willing to sacrifice—of their morality and of their lives—for the chance to not just be free of debt but to have immense wealth.

The season ends with a variety of unanswered questions, and given the massive success of season one, it seems Netflix would be more than willing to pick up a second season. The well-deserved popularity and subsequent ripple effect of “Squid Game” helps prove that American audiences can appreciate international television for its quality performances, design, music and writing, regardless of language and cultural barriers.