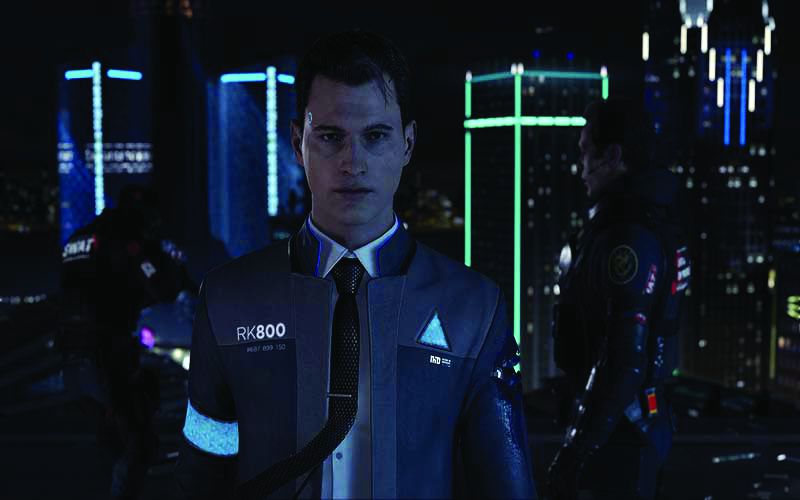 Video games have long been perceived as an entertainment medium with lesser artistic merit than its competitors. Books get the center of analytical study but movies, music and even television shows have gotten far more artistic attention than video games. On the surface, this might seem fair. Wildly popular games like “Call of Duty”, “Minecraft” and “Fortnite” dominate gaming discourse despite not saying anything about the world. However, digging beneath the surface reveals games with a lot to express on the subject. Enter “Detroit: Become Human”.

“Detroit” is a 2018 video game developed by Quantic Dream, who have also developed “Heavy Rain” and “Beyond: Two Souls”. Their games are known for being predominately interactive storytelling games and “Detroit” is no different. Players control the three android protagonists Markus, Connor, and Kara as they begin to navigate the world gaining sentience. Throughout the game, players control both their movement in the futuristic “Detroit” as well as the decisions they make.

Decisions are the central storytelling function of “Detroit”. Players can choose what actions the character takes in just about every interaction, which can often radically shape the outcome of the story. Choosing whether to run or fight can shape the fate of the world around them and different dialogue options can improve or deteriorate personal relationships, which unlocks divergent possibilities later on.

In the world of “Detroit”, androids are a discriminated class. Throughout the story they are often subject to abuse, mockery and servitude. The game challenges the player to think about whether this is deserved and draws parallels to contemporary social issues through this portrayal. This is baked both into the direct story and the uncovered background lore.

The direct story follows a police android and themes of police bias against androids, a household android who runs away with the abused child of her owner and a household android on the run after a violent encounter at his home who begins to lead a revolution. Through background dialogue and scattered magazines there are topics such as android immigration, android participation in sports, gentrification and climate change that flesh out the game world and provide commentary on the world outside of the game.

The actual execution of these themes can be scattershot. The biggest flaw of “Detroit” is its inaccuracies depicting real situations. The real city of Detroit is heavily racially diverse and has major racial tensions, which are entirely replaced in this game for android tensions and little class commentary. Basing a game in a city like Detroit and ignoring this element is a glaring oversight for a game offering such commentary. Class commentary is briefly attempted through Kara’s owner but as a white man who is able to afford an expensive android, this attempt falls short due to its brevity.

Reliance on painting these androids as facing a similar struggle to people of color in American history falls flat. “Detroit” uses allegories for real life struggles, such as the Civil Rights Movement in Markus’ storyline and the Underground Railroad in Kara’s, without giving full weight to the atrocity of these moments in history. In the game, these moments often feel more like a backdrop for the scene rather than true commentary. There is little that “Detroit” says about black history, it just uses it as a parallel for its own story. This feels exploitative at best and downright vile at worst.

However, the way “Detroit” handles its own topics of sentience and technological innovation is well-done. The android’s evolution into becoming sentient beings and rising up, racial parallels discarded, is gripping and interesting. This alongside its entertaining gameplay makes it worth playing. The story can branch in dramatically different directions and a flowchart at the end of each chapter shows what decisions the player has made before with locked off missed opportunities. This is a fascinating inclusion in the game and makes “Detroit” stand out among its contemporaries in interactive storytelling.

While it should have done away with some of its messaging and focused more directly on a few themes ,“Detroit” remains an interesting story and entertaining game throughout. It’s a well-worthy game for examination of social issues in video gaming. Most of its plotlines either do not stick the landing or should never have jumped in the first place, but in a field where too many games do not even attempt commentary at all, having too much feels refreshing if imperfect.