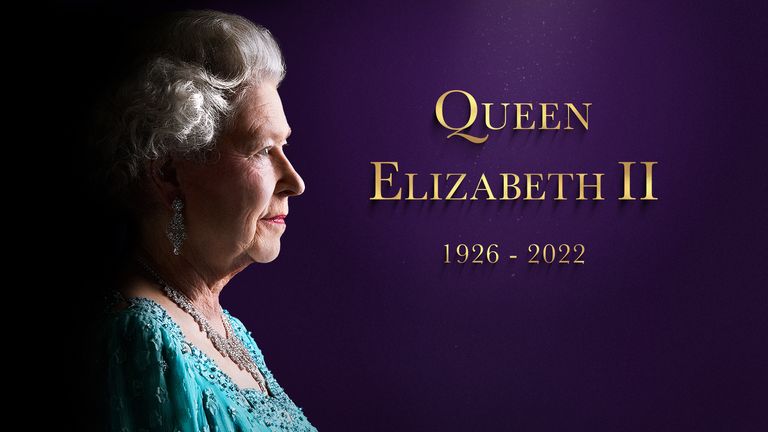 (Photo courtesy of SkySports) “A tribute graphic for Her majesty Queen Elizabeth II who reigned for 70+ years as Queen.”

On Thursday, the 8th of September 2022, Her Majesty Queen Elizabeth II passed away at the age of 96 and reigned as Queen for over 70 years. This has sent the world into shock and in a state of mourn, especially in the Commonwealth Realm of Nations, where the Queen was recognized as the legitimate Head of State.

“This has been planned for some time,” said Dr. Shawn Driscoll, who requested to be labeled as an “adjunct instructor” and a “proficient candidate” in the political sciences department. “The queen, being of advanced years, has given the British government some time and some foresight on how to have their period of mourning, how the burial will be carried out and so on.”

For years, the general public has questioned when this untimely event would happen and what exactly would occur if such an event took place. According to goodto.com, when the Queen dies, Charles, Prince of Wales, will become King, BBC News (a.k.a. The British Broadcasting Company) will air pre-recorded vignettes and recite a pre-written obituary, dedicated to the Queen. A committee will also send the message out to the Commonwealth member states, instructing them to give the news to their populus.

“Even when you plan something like this, as big as it is, no one is truly ever ready for it,” said Dr. Driscoll. “But another thing to remember is, Britain has a king again, for the first time in over 70 years. Even when his mother was reigning as Queen, [King] Charles has always been someone that has not only respected his mother’s reign, but also done things on his own, both charitable and within the Royal Family.”

The last time that the United Kingdom and her Commonwealth Nations had a king reigning on the throne was King George VI, who reigned as king from 1936-1952. During his reign as King, he, unfortunately, had to reign during World War Two and the beginning of the Cold War. After 70 years, Charles will take the throne and will be known as King Charles III. Despite this very large-scale change in the world, there are some Commonwealth Nations that may seize this opportunity to break away from the Commonwealth.

“These countries have multiple options when questioning if they want to remain in the Commonwealth,” said Dr. Driscoll. “They can either say ‘I want to break away from the Commonwealth and do so as soon as humanely possible. Or they’ll wait it out and see how King Charles will be as King and then decide on where they stand and where their status as a Commonwealth country lies which will take a more prolonged amount of time compared to exiting and making a run for it.”

In a situation where this scenario may come to fruition some may see this as an opportune moment to break away. However, in the case of Scotland they may try and separate from the rest of the United Kingdom, stemming from Brexit back in 2018. But regardless, there are still millions wanting to travel and pay their respects to the Queen while her body is in a state of “laying-in-state,” and in recent examples, these lines can be as long as 24+ hours.

“From an American perspective this is something we haven’t seen before stemming from the likes of JFK, Robert Kennedy and so on,” Dr. Driscoll said. “In terms of these long lines to pay their respects to the Queen it is important to stop and take a moment to pay your respects or think long and hard about who the Queen really was and how she inspired millions of people worldwide with her massive influence.”

But in times like these, it is always appreciated and honorable to stop, remember who that person was, pay respects and send condolences for the loss of someone as influential as the Queen was. With her funeral set for September 19th that time now is more important than anything. But with King Charles set to be formally crowned in a few months some questions have been raised as to how good of a monarch he will become.

“When it comes to how good or how bad King Charles might be as King that will take some time to determine such factors,” Dr. Driscoll stated. “It might take up to five years to get a good sample size of what he is capable of or it might take 10 years, and with it, a more complex deep dive it will take to determine how good or bad King Charles becomes as the next King.”