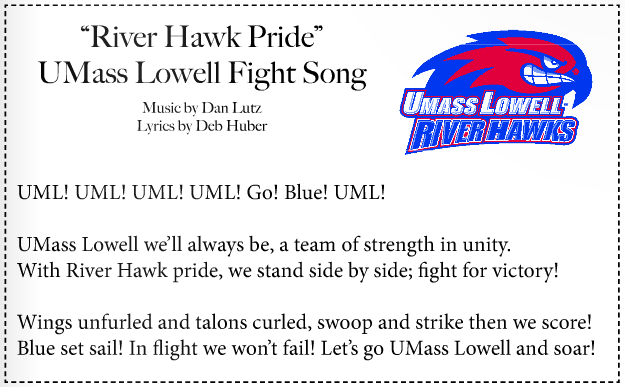 A look into the creation of UML’s new fight song

If this chant isn’t familiar to you yet, it will be soon. After decades of going without one, UMass Lowell finally has its very own fight song, “River Hawk Pride”!

Lutz is anything but a stranger to composing and arranging for various types of ensembles: he has hundreds of works to his credit, including a piece titled “Dichotomy: Impressions of Kerouac,” inspired by the works and life of Jack Kerouac.

The music was composed by Lutz while the lyrics were written by Huber, who, unbeknownst to many, is a published poet. The two have been working with each other for over 20 years, having formed the UML Pep Band (Jazz-Rock Big Band, or “The Band That Plays At The Hockey Games”) together in 1995.

A big question surrounding the conception of the fight song is, of course, why we didn’t have one before.

To his surprise, Lutz had an answer more interesting and in depth than expected.

“The marching band was actually not formed tended to athletics,” Lutz said, “but it was formed by the music ed. area to teach prospective music teachers who may have to work with a marching band.” He explained that since the marching was formed alongside the creation of the music education department, there was not a request or demand for a fight song. What the school adopted for their “fight song” was a generic tune called (Lutz and Huber said simultaneously) “University March.”

“The opportunity to have something that’s unique to the university is fantastic,” said Huber in regards to having a song created specifically for the school.

Lutz informed the athletic department that the song they had been using was a generic tune; this peaked their interest and motivated them somewhat to have a fight song created. There were attempts at contests throughout the years, but to no avail.

“Recently, with the advent of Division 1, it became more critical,” said Lutz. “We needed to do something about this.”

He noted that Athletic Director Dana Skinner had been the driving force behind the creation of a fight song for years, but Associate Vice Chancellor Larry Siegel is the one who asked Lutz how to make it happen. Siegel asked if Lutz knew any composers that could write a piece like this, to which Lutz replied, “Yes. Me.”

Lutz called upon Huber, who had already taken a stab at writing the lyrics. Huber explained that writing for something specific (as in genre or audience, for example) requires care and research. They, for lack of more clear terms, took the basic guidelines for a fight song and modernized it to fit with the UML community. The students need to be comfortable singing it.

For the musical populace: “A traditional fight song is actually a tune from the ‘30s,” said Lutz. “If you look at the structure and harmonic content of all fight songs, there is about seventy-five percent that have almost identical changes – a certain sequence of changes.”

They both note the University of Notre Dame’s fight song, “Victory March,” as their personal favorite fight song (aside from UML’s, of course), but claimed they took no influence from other fight songs in their composition; instead, they used their knowledge of how fight songs work musically. He restated that there are sequences of changes that matter; there are “certain places where it should go to a IV chord.”

“I wouldn’t tell you that there isn’t an influence of more contemporary composers,” said Lutz. “There’s a little John Williams flavor there, and that’s not unpurposeful.”

“We all want this to be a long-standing tradition,” said Huber. “That’s pretty weighty to think about.”

They explain that the move of UML athletics to Division 1 brought forth a need for proper branding and traditions, which the school had lacked in the past.

“There wasn’t a purposeful branding that [existed],” said Lutz. “I think that part of the chancellor’s mission is to make there be certain identifiable characteristics of UMass Lowell that makes it unique… I think [this is] the first time there’s been a concentrated effort to focus on traditions.”

“Beyond wearing the colors, [a fight song] is the next other identifiable thing that everybody has,” said Huber. “It’s an enormous unifying factor.”

This effort has not gone unnoticed to the UMass Lowell community. The reception has been great – it has been embraced by both students and staff, along with the musicians on campus.

Chancellor Marty Meehan is also very happy with the song. “I was very impressed with it,” said Meehan. “I like that our own faculty wrote it. It’s a high-quality song, and I hear it’s gotten good reactions from students.”