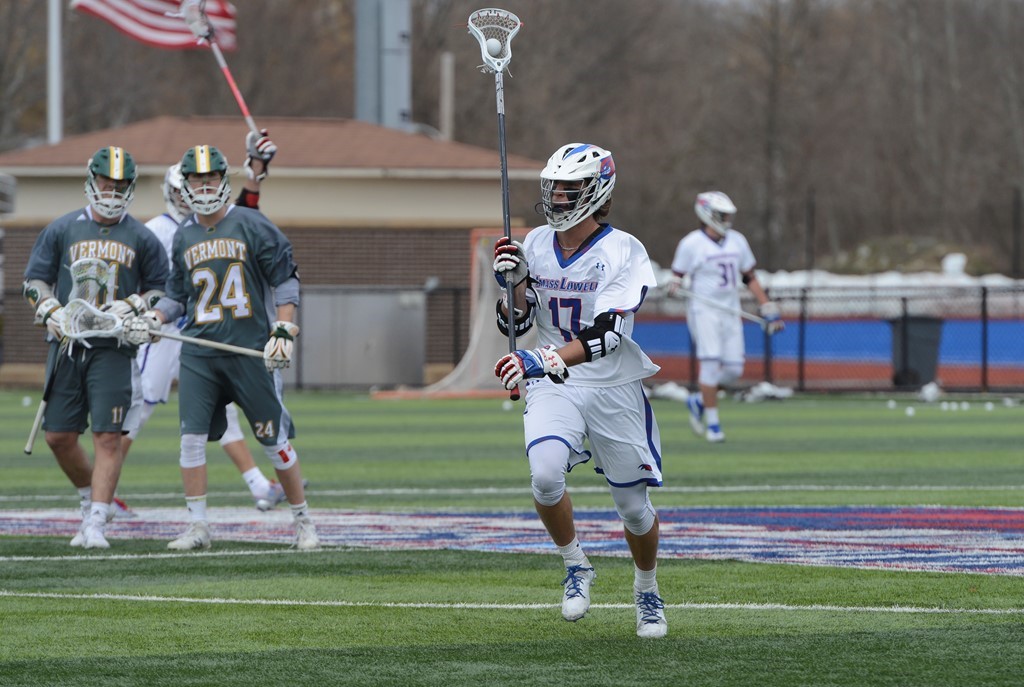 Second-year captain Will Puduski says that he looks forward to the 2018 season. (Courtesy of UMass Lowell)

If all goes according to plan, the 2018 season will be a seminal one for the UMass Lowell men’s lacrosse team. While the team’s transition to Division I play has been rocky, with them winning their first America East game only last season, head coach Ed Stephenson believes this will be a key season for the River Hawks going forward.

Beyond their 4-12 record last season, Stephenson points out that several of those games had been close, with either team having an equal opportunity to take it. Stephenson said he sees little difference in ability to win a game among each America East school.

“We lost five games that were within a goal late in the game, a couple of them when we pulled our goalie,” said Stephenson. “We want to turn those games into wins with the experience we have coming back.”

UMass Lowell men’s lacrosse enters this season as its first with a recruited senior class, with members that include defenseman Will Puduski, attack/midfielder Sean Tyrell and midfielder Cory Highfield. Puduski, Tyrell and Highfield also serve as three of UMass Lowell’s four captains alongside senior attack/midfielder Jon Phillips. Stephenson expressed pride with his core of talented and responsible seniors, not only on the field, but in the classroom.

“[UMass Lowell men’s lacrosse] has always been number one or two in each of our first three years academically in the conference. We’ve set this year, with our first senior class, to be number one and never relinquish that. That’s what I had done when I was at Binghamton and certainly that’s been our goal here,” said Stephenson.

Stephenson and his coaching staff work hard to make sure that winning games does not jeopardize their players’ academic and personal success. In establishing a positive culture at UMass Lowell, Stephenson said that he and the other coaches limit practice time during the week and the amount of road games that they play in order to make sure that the players can focus on school.

On the field, Stephenson said he praised his senior athletes for their willingness to take charge of practices and embrace their leadership role on the team. He also said he thinks back on how much the seniors have changed since their freshman year and is struck by the difference in how they hold themselves and participate on the team.

“I really just sat back the first day of practice and smiled,” said Stephenson. “These guys are doing a great job leading.”

Puduski, a second-year captain, is ready for him and his fellow captains to guide a more polished group of lacrosse players through this season. He says that one of his goals for himself is to become a better leader beyond improving his own game statistically.

“I’m hoping to be able to lead us through those close games that we lost last year,” said Puduski. “I think that’s our biggest area for improvement.”

The team starts with a month-long span of games on the road and will play their first home game on March 3 when they take on Monmouth at Cushing Field. This does not particularly bother Puduski. He points out that while it is difficult to play on the road, if the team can win there, it should be that much easier to win at home, as well.

Stephenson was similarly untouched by it, saying that his priority in scheduling was to have an even split of road and home games. He got his wish, as UMass Lowell will play at home eight times during the 15-game season. The important bit of the season will be the latter part of the season, when the River Hawks enter conference play.

Perhaps a key surprise factor will be the sizable freshman class debuting this season. Stephenson said that with such a big roster, each player is vying hard for a spot on the starting squad. But he says that he noticed that the freshmen are especially competitive and may likely play several minutes out on the field “very early on.”

Stephenson points to midfielder Dominic Giachello, attacks Harrison Morrill and Jake Lining, and defenders Jack Hinken and Tyler Ward as freshmen to look out for this season.

Puduski and his fellow captains have been focusing on helping those freshmen adjust to the Division I game. “I think what’s most important is our leaders of the team can take the guys who might have not been in those close games before, and kind of take them under their wing,” said Puduski.

But like his head coach, Puduski said he is very impressed with the newest addition to the UMass Lowell squad.

“They’ve really stepped right up to the plate and haven’t really hesitated to show off their skills and grit down on some ground balls,” said Puduski.

Beyond introducing the crop of freshmen this season, both Stephenson and Puduski say they hope to excite UMass Lowell students and lacrosse fans around New England.

Puduski is focusing on capitalizing on the support of the growing number of fans at home games and looks forward to later in this season’s schedule to give them something to keep coming back to Cushing Field.

“Getting those wins at home are huge for the fan base,” Puduski said.

“We’ve seen our fan base growing each year and I think the level of competitiveness this year is exciting. I invite everybody and anybody that is a lacrosse fan, or even if they’re not, to come out and watch [UMass Lowell],” said Stephenson.