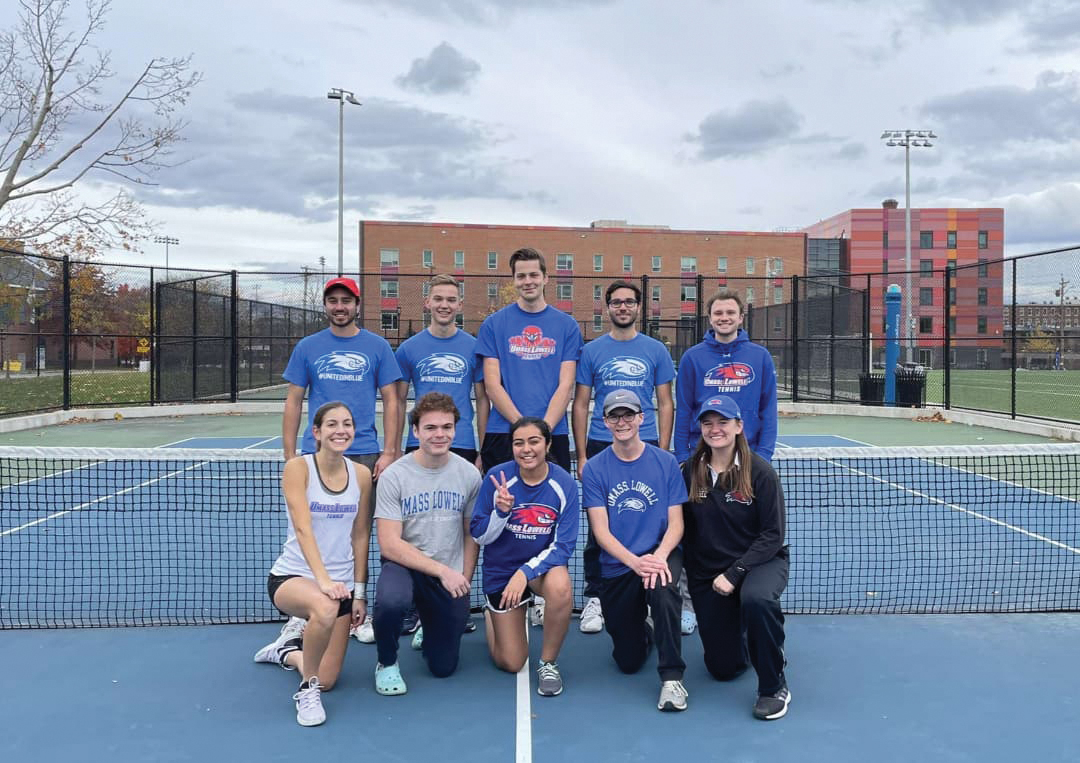 While tennis may not have an intramural or official UMass Lowell team, it is nothing to sneeze at. Club tennis has “been a thing for a hot second,” said Natalie Gonzalez, club president. “Club tennis is weird, ’cause it’s… a club, but it’s a sport… we’re all the school’s got.” In a tournament hosted by Harvard, the club ranked ninth overall in the state out of 28 teams that played in the tournament.

The team has to keep it small, accepting only eight of 60 applicants that tried out at the start of the semester. Despite being a club, it is still very much a sport, so it does not hold general member meetings but practices three times a week.

Massachusetts’ unpredictable fall weather makes knowing how practices will go difficult, but once snow hits the ground the club will change locations to an indoor tennis court and only have practices once a week.

Due to being only a club sport, the club gets much of its funding through fundraising, although the club gets some funding from UMass Lowell. The club is looking hoping to hold another fundraiser in the spring, offering tennis lessons to students and anybody in the Lowell area.

Gonzalez said, “As soon as the weather clears up and we lose snow, we’re taking this time to work on advertising and just getting the people on our team having them have a clear enough schedule to actually coach these tennis lessons, but we think could be fun.”

The Harvard tournament is not the only event the club tennis team has participated in. In a match against UConn for men’s doubles, Jens Georgs and Rodrigo Palominos won six to three, for men’s singles Gregoire Clement won six to four and for a nerve wracking match of mixed doubles, Jacquelyn Iannuzzo and Jens Georgs won six to five. “I’m really, really happy and proud of my team and everything they’ve accomplished so far.” Gonzalez said.

COVID proves a challenge in scheduling matches for clubs, intramurals and division teams. It does not look like there will be any future matches this semester for the club due to other club teams either rescheduling or cancelling matches due to COVID.

Despite the challenges they’ve faced, the club team hopes to host a home tournament like the one Harvard ran. “We want to have other teams play against us. We want the UMass Lowell tournament. The River Hawk tournament… Name is still work in progress… That’d be something you know for her when she’s president next year to like, keep on and then when the president after her, you know keeps that up and UMass Lowell will have their own tournament, so that’s our big project, and we’re really hoping that nothing gets in the way of that.”

If the tournament inspires the university to create intramural or division teams, Gonzalez is all for that. The club tennis team this year has shown they are a strong and dedicated team. “The smallness and kind of like tightness… just helps foster that sense of community.”