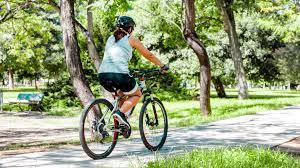 (Photo courtesy of Healthline) Biking is a physical activity.

With three campuses to navigate in a city full of traffic, biking offers a solution for many UMass Lowell students trying to make their way around. While safety and weather is a concern for some riders, growing interest and ridership across the campus suggest the potential beginning of a true biking culture at the university.

The first step to building this culture, according to workers at the university bike shop, is to get people back on the road after the pandemic.

Assistant Director of Outdoor and Bicycle Programs, Kevin Soleil, said the university’s Bicycle Advocacy Committee does a yearly count of bicycles on campus every October.

“I think we’re somewhere in like 220, or about half of what we were pre-pandemic,” said Soleil. “Everything is…being regrown from…having disappeared for a year.”

The UMass Lowell Bike Shop, located by the Perkins Townhouses at 5 Lawrence Dr., offers bikes, parts, workspace and mechanical expertise to students, faculty and the public.

“We offer something called open stand time which allows students to come in and just fix their bikes around here, and I’d say pretty much every day that I’m working someone comes in,” said Alex Cook, a junior music major who works at the bike shop.  “It’s awesome to see.”

Cook said that bicycling provides an alternative solution for commuter students that cannot afford the full cost of a university parking pass.

“A huge benefit frankly is saving money. The parking passes on campus [cost] quite a bit, and for a lot of people they’re a little bit out of reach,” Cook said. “I’m a commuter student. I live in an apartment nearby campus. I would not be able to afford having a parking pass, so the bike allows me to get to and from classes really quickly, almost as quick as the cars with the traffic, but without having to worry about those costs.”

Junior electrical engineering student, Nicholas Marinelli, who also works at the bike shop, primarily bikes to save time. “Walking to class just wastes a lot of time [I] could be studying or doing something else,” Marinelli said. “It is a half hour walk to class from where I live versus biking is probably a whole six minutes.”

Though UMass Lowell is silver level bicycle friendly university, safety on the roads near campus is a notable concern for the biking community. “I think that on UMass Lowell campuses some of the challenges are, for me personally…and a lot of other folks, the aspect of, is it safe to ride?,” Soleil said. “Do they feel safe riding to campus on the road, on the street, on the sidewalk? I think that that’s an ongoing challenge.”

Cook said he worries primarily about the roads.

“Some of the roads are just not in good quality, so it can create a dangerous environment where it’s very bumpy,” he said.

Although some roads need improvements, Cook said most of the intersections around campus have updated, working safety features.

“If I’m ever not comfortable going through the intersection through the road, I can always just get onto the sidewalk and just press the button and walk across, and it’s always safe that way,” he said.

Sharing the road with cars presents its own safety challenges for bicyclists. “All over Massachusetts there are people that don’t really care to drive carefully around people on bikes, so they’ll just go by you. But you can’t really live in fear of those things,” said Cook.

Weather conditions present additional challenges to Lowell bicyclists. “Around here once it gets to the wintertime I usually stop biking,” Cook said. “In the rain [it can] get slippery–you can get really uncomfortable, if nothing else. Even with a rain jacket and everything, you’re going to get wet, and it can reduce visibility.”

Visibility is important for bicyclists’ safety, especially at night. Soleil said the bike shop is having a 30 percent off sale on lights and visibility equipment, as well as an event with basic light and reflector giveaways, to encourage safe riding.

Soleil said the university’s Bicycle Advocacy Committee would like more student perspectives to improve bicycling experiences on and around campus. Soleil invites interested students to join their upcoming meetings.

Soleil says he hopes recent work on the Concord River Greenway and the Riverwalk path will increase cycling culture in Lowell and in turn, ridership.

“[In] a lot of the [research] I have been exposed to, it seems like the more cyclists there are, the safer that it gets because people just expect them,” he said. “Folks start to do things that are predictable, and it makes it safer and better when you see somebody else doing it.”