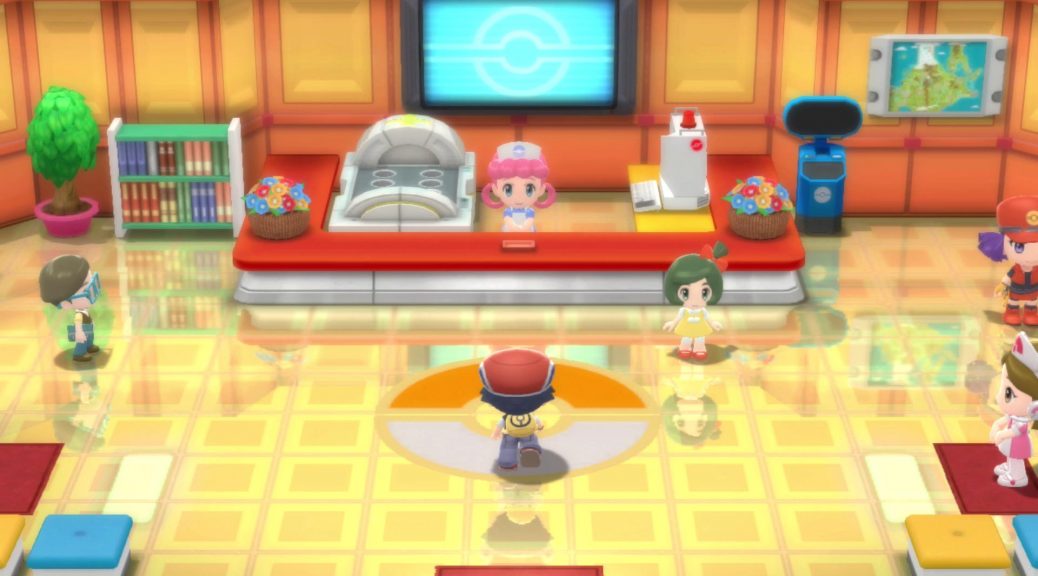 (Photo Courtesy of Nintendo) “Brilliant Diamond” and “Shining Pearl” are available to play on Nintendo Switch.”

“Pokémon” is one of the best-selling video game franchises of all time, with installments dating back to 1996. Games take place in different regions of the world of “Pokémon”, with each game region encompassing what is known as a “generation” of “Pokémon”. Pokémon “Brilliant Diamond” and “Shining Pearl” were released on November 19, 2021. They are remakes of the beloved fourth generation of Pokémon games: “Diamond” and “Pearl”, which are among the strongest installments in the franchise.

While each “Pokémon” game varies in specific game mechanics, most “Pokémon” games follow the player controlling a pre-teenager as they get their first Pokémon. Pokémon widely inhabit the world of their games and are animated creatures that players can catch, befriend and use in battle with other Pokémon trainers to become stronger. The games typically follow the player character taking on the Pokémon gym challenge. The player challenges eight different strong gym leaders before taking on the Elite Four and Champion, an assortment of the strongest trainers in the region. Players are also typically tasked by a nearby Pokémon professor to fill the Pokédex, a digital collection of all the Pokémon in the region. To do so, the player must catch every Pokémon.

One other commonality of the franchise is its dual-release strategy. “Brilliant Diamond” and “Shining Pearl,” are two separate games, with the same region and story but slightly differing encounterable Pokémon, and this was the same for their original games, “Diamond” and “Pearl”. The original games also tend to have a third installment, though these rarely get remade, and features of the third installment are either brought into subsequent remakes or discarded.

The main difference between installments of the franchise is new characters, regions, Pokémon and stories. As remakes to preceding games in the franchise, it was unlikely that “Brilliant Diamond” and “Shining Pearl” would change what it means to be a Pokémon game dramatically. Sticking close to their original games is both the biggest strength and flaw of these installments.

“Diamond” and “Pearl” are two of the strongest games in the Pokémon franchise. The region they take place in, Sinnoh, is one of the series most varied and lore-intricate regions. Starter Pokémon options are some of the best in the franchise. Between the fire monkey Chimchar, the water penguin Piplup and the grass turtle Turtwig, there is no wrong choice. Early game Pokémon choices are varied and viable choices for even the later stages of the game. Additionally, these games contain some of the coolest looking legendary Pokémon of the series, rare Pokémon that only one of exist in each game file.

These strengths carry to “Brilliant Diamond”, and “Shining Pearl”, but little is done to build upon them. The central structure of the game remains just as fun and effective, but with little central improvement on gameplay and mechanics, there is a lack of creativity. While remakes should strive to stay close to their original games, it is hard to justify spending $60, $20 more than the cost of the original games, for an identical experience.

There are three noticeable changes from the originals. The art style has been modernized, though the graphics still lag behind most of its contemporaries. In past games, only the Pokémon in battle gained experience for winning battles. Now, upon victory, every Pokémon in the party gains experience. This grants accessibility to newer players but makes the game easy for experienced players.

Lastly, the game’s Underground system has been expanded. This is the one portion of the game that sees notable improvement. Pokémon can now be encountered, battled and caught in the new Underground and can be accessed early in the game. It is a fun area to explore, especially thanks to its higher-level Pokémon yielding higher challenges.

Another big letdown of “Brilliant Diamond” and “Shining Pearl” is their lack of content from “Platinum”. Areas in “Platinum” such as the Distortion World are among the most unique and enjoyable aspects of the Pokémon franchise, and their absence here is sorely felt.

Due to the ease of play and the direct remaking of its originals, “Brilliant Diamond” and “Shining Pearl” are best enjoyed by new players of the Pokémon franchise or those who played the originals and seek nostalgia. The central structure of Pokémon games is enjoyable, and it is unlikely that any fan would not have a fun time playing these remakes. However, due to its lack of improvements on the originals, “Brilliant Diamond” and “Shining Pearl” is a case of missed potential. Instead of continued remakes, the Pokémon franchise needs a structural shakeup with modernized graphics.