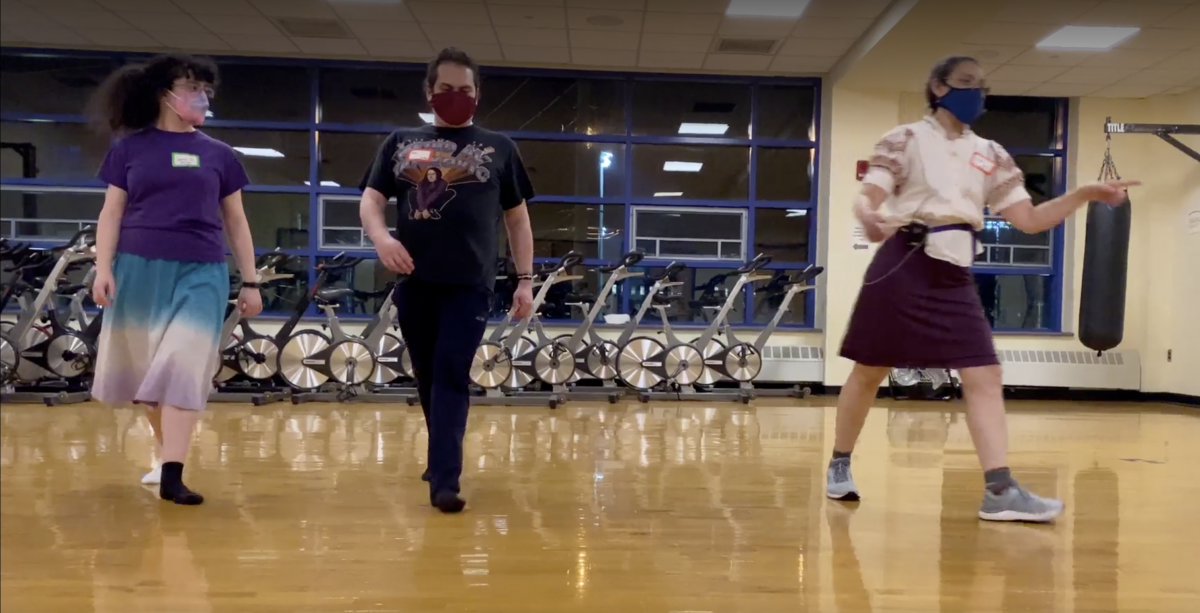 Every Tuesday at seven, UMass Lowell’s Folk Dance Club comes together in the Campus Recreation Center and over Zoom to share two hours of folk dancing, bringing people and cultures together.

The club was founded in 2019 by Sarah Bustin, who is a physics student and current president of the club, and is taught by folk dance instructor Andy Taylor-Blenis. Bustin said, “the MIT folk dance club was derecognized because they didn’t have enough student membership, and I thought: well, we really need to get the folk dancing going back at the college level. So I started an email list to gain interest, and I asked Andy if she would come and teach, and she said she would, and by that April we had our first dance with live music.”

The club’s first dance brought in 50 people and featured live music. Since then, the club has arranged to bring in paid guest instructors to teach folk dances from different areas of expertise. Following the onset of remote learning, the club began meeting over Zoom—a practice they’ve kept alongside meeting in person due to its popularity with its members both in the state and across the country.

People from around the world brought folk dances and music from their cultures to the United States, where these dances are still practiced today. “The United States ends up being a place where it gets frozen in time,” Taylor-Blenis says.

Traditional folk dances from countries like Ireland, Hungary and Armenia have been preserved in the United States and even eventually brought back to their countries of origin by dance teachers that had been living the United States.

These dances and their music have also changed through travel and time. Taylor-Blenis said, “Oftentimes, what happened in the past was somebody would go to a country, they would learn all these regional dances, come back, and go: ‘folk dancers aren’t going to want all this,’ so what they did was they took a piece of music, which came from a region, took the steps that came from that region, and they put those steps to fit into that music. And that is what they presented to folk dancers.”

Bustin said the club does not teach dances that are religously significant or otherwise specific to members of a certain culture.

The club shares dances and music from a range of cultures spanning from across the globe. Club members can also request dances for the class to learn and dance. In the month of March, the club taught a variety of dances including an Irish dance, an Armenian Kurdish dance, a Pontic dance, Romanian dances, Greek dances and more.

Along with the preserving and sharing of culture, folk dancing can provide the movement, expression and connection to elevate moods and build community. Bustin said, “[Folk dancing] helps me a lot because I also have depression, and I feel better after I leave dances. And another way it’s helped me is that–I’m a lesbian, and I feel like I can express myself when I’m dancing. Especially with contra dances, because you’ll see guys wearing skirts a lot of times—the people switch roles a lot. It’s starting to happen more in international dance too, and there’ll be gender free dancing, and it’s kind of anything goes, and it just feels really good to be able to be myself and come out to the whole community.”