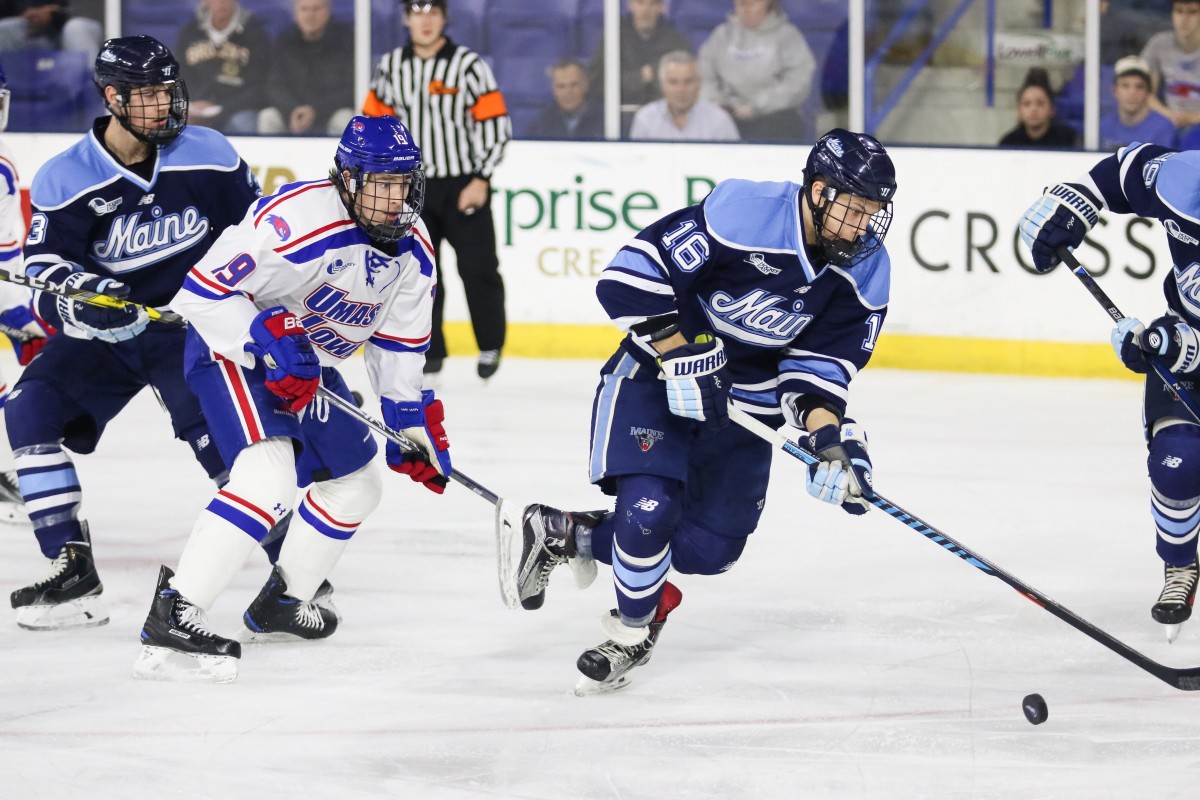 The River Hawks managed a series split against Hockey East opponent University of Maine this weekend, losing 5-2 on the road Friday but came home to the Tsongas Center to earn a 4-1 victory Sunday afternoon.

Special teams played a large part in their victory, with 16 total penalties being called. UMass Lowell went 2-7 on power plays while going 9-9 on the penalty kill.

The River Hawks were able to keep the Black Bears at bay, allowing only 8 shots on the 9 penalty kill opportunities. The Bears did not look very threatening on their opportunities.

“We gave a lot of time to different guys on the PK. I think that helped to balance it out and keep the guys’ energy levels up,” said head coach Norm Bazin.

Even without the penalties coming back to bite them, Bazin acknowledged that the sheer number of them was problematic. “We have got to do a better job discipline-wise, [we] can’t be giving up that many penalties,” he said.

The River Hawks did well to pressure the puck from start to finish. Forechecking remained aggressive throughout, resulting in Maine turnovers and offensive chances for the River Hawks.

“[On Friday] we were disappointed with our lack of attack mentality… we didn’t pressure the puck. We got back to the way we play today,” said Bazin.

Joe Gambardella earned the first star of the night with his goal and assist on 2 shots. The second star was given to Dylan Zink for his three assists and plus-1 on-ice differential as a defenseman.

Freshman Ryan Lohin played well all afternoon, garnering a goal, assist, and the third star of the night.

“Energy level was much different than Friday… Today was a real team effort, with different guys contributing in all areas of the game and in each situation,” said Gambardella.

Tyler Wall played a solid game, making 20 saves and answering the call when needed on some in close chances for Maine.

Overall, Head Coach Bazin said that he was pleased with his team’s bouncing back after a rough game on Friday. “Pleased to salvage a split in Hockey East… Always good to leave the weekend on a high note,” he said.

The River Hawks did everything in their power to get some revenge against Maine and received praise from Maine’s head coach Red Gendron.

“You have to give credit to Lowell… They played a tough game and showed us we weren’t sharp the whole night… We didn’t play hard enough or smart enough, but credit to Lowell for taking advantage,” said Gendron.

UMass Lowell looks to bring this gained momentum into their next contest at Notre Dame on Thursday evening. The River Hawks will spend the weekend in Indiana before returning to Lowell to take on the University of Connecticut for the first game of a home-and-home. Puck drop on Dec. 2 will be at 7:15 p.m.