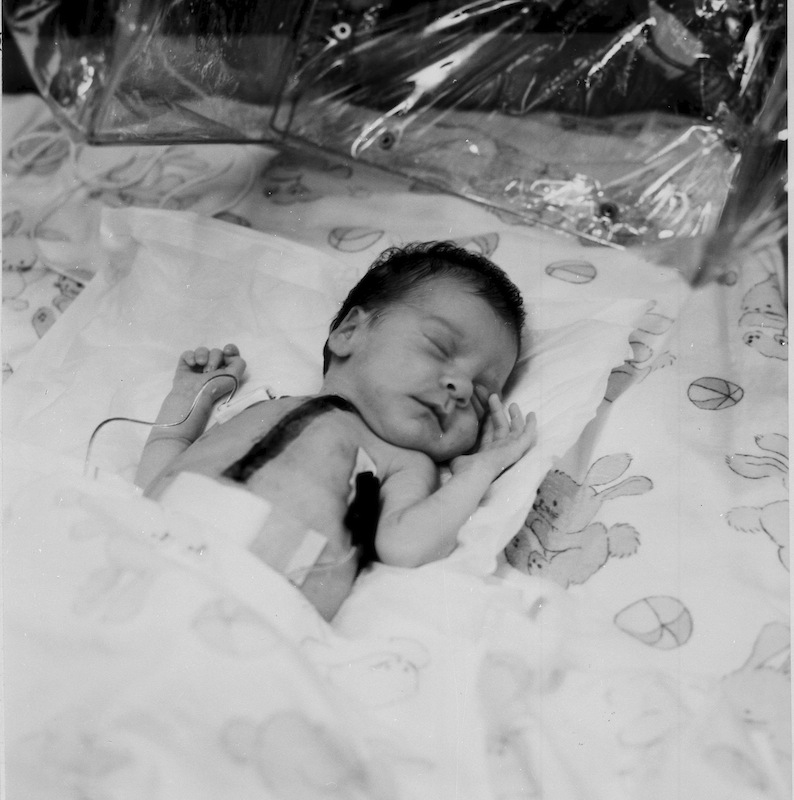 (Courtesy of: The Times) Baby Fae was the first infant recipient of a xenotransplant procedure, in which she received an organ from another species

37 years ago today, Stephanie Fae Beauclair, a baby born with hypoplastic left heart syndrome, became the first infant patient of a xenotransplant procedure. Beauclair, nicknamed “Baby Fae”, received a heart transplant shortly after her birth, but this was no ordinary procedure. Beauclair’s donor heart came from a baby baboon–a first for the medical field.

Born at 5 pounds and 9 ounces, Baby Fae’s life began as an uphill battle. She was born on Oct. 14, 1984, at Loma Linda University Medical Center and underwent the transplant just 12 days later. Her heart had progressively worsened since her birth, and it was then that cardiothoracic surgeon Dr. Leonard Bailey decided to proceed with the surgery.

The world watched as Bailey operated, successfully transplanting the healthy baboon heart in the place of Beauclair’s failed one.

Unfortunately, Beauclair’s body began rejecting the transplant heart and she passed away 21 days following the surgery at only 32 days old. Doctors believed the rejection had been caused by Beauclair’s O blood type creating antibodies against the AB blood of the baboon. Since medical innovations barely scratched the surface of the organ donation, the baboon heart was the only possible route. And, given that very few baboons have type O blood, Beauclair had no other options for survival other than this transplant. They hoped they could perform a human heart transplant at a later date, but no donor could be found in the time before her death.

Despite the unfortunate failure of this procedure, it led to Bailey being able to perform the first ever successful human organ transplant on an infant one year later. The surgery also led to further developments in xenotransplants, with experiments being done on animals like sheep, goats, and pigs.

In recent news, on Oct. 21, 2021, doctors at New York University Langone Health performed one of the first ever successful xenotransplants. The patient was a brain-dead woman who, with the consent of her family, was given a kidney from a genetically modified pig. The doctors who performed the surgery said that the organ started working directly after the surgery’s completion.

The kidney was implanted outside of her body in her upper leg. After 54 hours of observation, the kidney functioned normally and the patient’s body had not yet rejected it. The researchers who conducted this study said that despite the organ being on the outside of her body, these findings show that it should still be functional if it were implanted internally.

The pig was genetically modified to develop organs that were less likely to be rejected by the human body. Researchers found pigs to be more practical than primates in xenotransplants given that their organs reach human size much faster. The biggest risk in transplants like these are the incompatibilities of blood types  which can lead to organ rejection and death.

Doctors and scientists are calling this a medical breakthrough, given its potential to help tens of thousands of people every year across the globe. However, the question of ethics has come into play again from both doctors and animal rights activists. Testing these procedures on human patients is key to its future use, but scientists are working on doing it ethically. Organizations like PETA dislike this practice, viewing the loss of these animals’ lives as not only unethical, but inhumane.

More research needs to be conducted for this practice to be used on living patients. These procedures will most likely not be commonplace in hospitals any time soon, given the much-needed research as well as addressing the ethical issues behind it.

Despite the lack of foreseeability, scientists still regard xenotransplants as a major scientific breakthrough with the possibility of helping hundreds of thousands in the years to come.