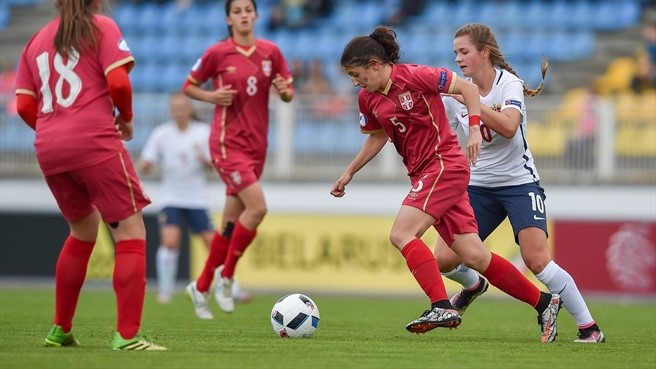 Mostarac represented Serbia in the UEFA U-19 Championship in late August and early September. (Courtesy of UMass Lowell Athletics)

Women’s soccer freshman defense Dunja Mostarac has had a unique first month of college. Not many college students can say they’ve played almost 600 minutes of Division I soccer while managing to squeeze in an international tournament.

Beyond that, Mostarac has also needed to stay on top of her classes in a new country, at a school she had never even visited before committing.

While that may sound like a recipe for a stress bomb, Mostarac seems to be handling the pressure quite well. In her 594 minutes for UMass Lowell, Mostarac has started seven games and scored a goal, attracting the eye of the myriad soccer fans in Lowell.

‘’It means a lot to me to be able to come here and play in my own age group at a high level,” Mostarac wrote in an email. “The competition is bigger, so it forces me to work harder.”

And work hard she has, on both a soccer and personal level. Mostarac has needed to balance acclimating to college with the stress that comes from being a Division I athlete. Luckily, she says that she has found a strong support system in her fellow teammates and coaching staff.

“Before I got here, I talked a lot with the coaches and athletes from the school, so it made [adjusting] a lot easier,” Mostarac wrote. “[My] teammates have been very welcoming since day one and made me feel comfortable.”

Just as she was building new friendships with her teammates and asserting herself in Lowell, she had to leave and represent her native Serbia at the European Women’s Under-19 Championship in August.

After Serbia played well, moving past the qualifying round to notch an opportunity to play the next round in April, Mostarac packed her bags and returned to Lowell for the River Hawks.

Mostarac has hardly had any time to sit down and process her surroundings without moving on to the next big task, whether that be college, Division I soccer or the very laid-back and cool endeavor of an international tournament in another country. But she is hardly one to complain.

“Traveling to Europe just to play for my national team was a little bit hard adapting to the time difference and style of play, but the pride in that, makes up for it,” she said.

Mostarac suited up for UMass Lowell a mere three days after her last game in Liechtenstein and scored her first collegiate goal a week after that. If she has had any problems coping with the stress that comes with her very unique situation, Mostarac has shown no signs of it.

It seems to help that she says that she genuinely likes playing for UMass Lowell, amidst all of the craziness. The campus has proved to be a place of solace where Mostarac can settle down.

“I enjoy Lowell because it is small and the campuses are very organized. I like that there is not a lot going on except for school, which allows me to focus,” she wrote.

Even when Mostarac says that she needs to work harder in her classes because she struggles with the language, and that balancing both her education and soccer careers can be challenging, she finds positivity on the pitch.

UMass Lowell’s passionate fan base and overall enthusiasm for all things soccer seems to sweeten the deal for Mostarac.

“I enjoy the games the most, especially home games,” she wrote.

Mostarac certainly has made a case for herself as one of UMass Lowell’s most promising freshman players, and the season is far from over. She looks squarely to the future, where she hopes to do the River Hawk faithful proud and develop her own game.

“I want to prove myself as a student here and improve my game individually which will help the team’s success towards our goals,” Mostarac wrote.