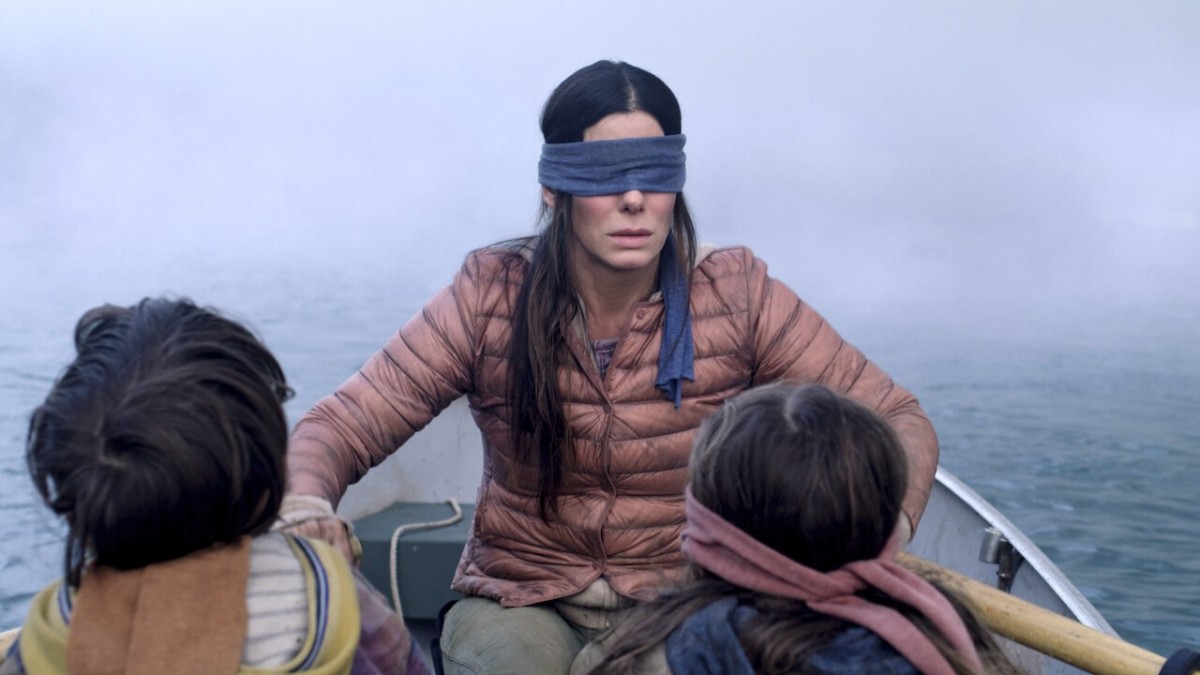 “Bird Box” had the biggest week-long viewership of any Netflix original film. (Photo courtesy of Netflix)

For those thinking of watching the Netflix movie “Bird Box,” take heed from the movie itself: put on a blindfold and don’t look.

“Bird Box” follows Malorie (Sandra Bullock), a detached woman who learns to love herself and others through her harrowing journey to survive; sound familiar, “Gravity” viewers?

The movie begins with Malorie ushering two wide-eyed children down a river to safety, and in flashbacks, the movie details everything the audience wants to know about how they got there (except the cool monster parts, of course). As Malorie leaves an ultrasound appointment for her unwanted baby, people begin to die, smashing themselves on anything in reach that’s remotely smash-worthy.

One would think “Bird Box” had potential: unspoken fear, pain and the darkness of mental illness punctuate the beginning of this movie. But then, like Malorie’s descent down the river, things get rocky, when for some reason it is concluded that the reason for the suicides are “creatures,” and if you look at them, you die.

What makes “Bird Box” frustrating is not that the audience never sees these creatures, but that they remain a total mystery. From a plot standpoint, the motivation for the “Bird Box” beasties are never shown, and their weaknesses are never explored. As a metaphor for the darkness and mystery of mental illness, the monsters’ connection to the delicate subject of suicide was perhaps meant to be explored by the audience, but feels insensitive and more of a cheap movie explanation rather than a serious metaphor.

As the movie veers off course, an assortment of one-note characters; sweet old lady, nerdy grocery clerk, crotchety old man, etc., hole up in a house with Malorie and clumsily try to test their surroundings, resulting in, of course, death, as they try to protect themselves from the poorly-conceived threat outside.

“Bird Box” is trying to make a statement here about mental illness, but overall it is hard to see past the glaring question this poses: what does this movie mean by “crazy?” Is it those with bipolar disorder? Depression? Anxiety? Attachment disorders, like Bullock’s character Malorie seems to have? Or only those hospitalized? If “Bird Box” is trying to make a statement about mental illness and not just the victim of poor writing, it comes across as blunt stigmatization, even if it was meant to be a statement about living in darkness or seeing pain nobody else can.

Despite its obvious flaws, this movie is not without poignant moments. As Malorie escapes with the children down a river to safety, it mirrors her journey to accept herself as a mother, and while severely heavy-handed, the conclusion is sweet. Bullock’s acting is good, and many scenes, such as when she comes across someone else along the river, are truly chilling.

There is potential in this movie, and an attempt made to make a comment on the depth of human suffering and the way our brains handle tragedy. However, compared to recent horror thrillers that deftly tackle themes of family, race and mental strife, “Bird Box” feels like an absolute blunder. In the midst of other recent thrillers like “A Quiet Place,” “Get Out” and “Hereditary,” the over-hyped “Bird Box” gets a goose egg.