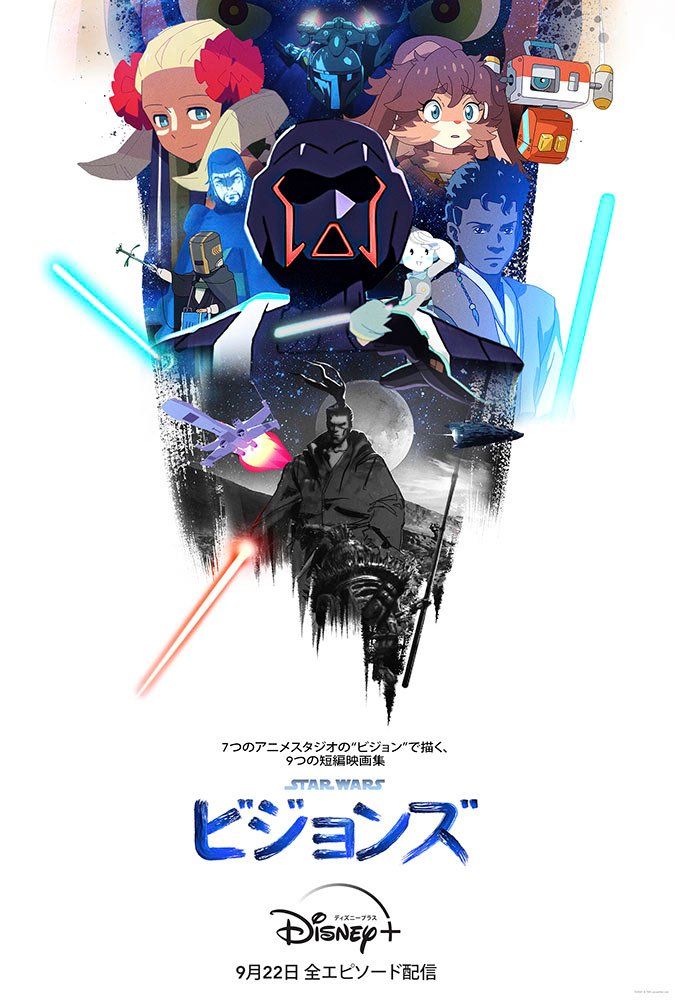 (Photo Courtesy of Disney Plus) “Star Wars: Visions” is a series of nine short films set in the “Star Wars” universe.

“Star Wars: Visions” is a series of nine animated shorts, ranging from 13 to 20 minutes each. It was developed by Japanese animation powerhouses like Studio TRIGGER, Kamikaze Douga, Twin Engine and more.

Each episode is a self-contained, non-canon, story set in and inspired by George Lucas’ “Star Wars” universe. The episodes range widely in tone, visual style and story, yet work to expand on the star wars universe and work together to create an overall fantastic piece.

“The Duel”, the first episode of the series developed by Kamikaze Douga, is heavily reminiscent of old samurai films and Kurosawa style directing in terms of visual style and storytelling. It follows the themes of Jedi and Sith, but alters the history of the “Star Wars” universe, mixing it with an alternate historical Japan.

Most stunning perhaps, is the combination of fantastic 3D animation, shading and coloration. In the short film, everything is set in a gritty black and white, excluding the plasma-like glow of blasterfire, lights from droids and greebled buildings and most notably, the lightsabers.

The sound design is additionally fantastic, with powerful bassy explosions, satisfying and impactful bursts of blasterfire and the warped electrical clash of lightsabers.

The episode also has a short novel written by Emma Meiko Candon expanding on The Ronin’s story.

A second stand-out short film includes TRIGGER’s “The Elder”, directed and written by Masahiko Otsuka. It appears more grounded than TRIGGER’s other work in the series, “THE TWINS”, due to a more subdued color palette and a less over-the-top style.

Its shading, coloration and character design are vastly different from TRIGGER’s other works like “Kill La Kill”, “BNA: Brand New Animal” and “Promare”, but it remains fast-paced, emotional and extremely interesting.

The fight choreography and emotion is where the short really stands out. The fight between Crosser and The Elder is fast-paced and easy to read. The difference in fighting style and manipulation of the force rivals other great duels in the “Star Wars” cinematic universe.

More importantly, the duel is used to further the emotional depth and styling of the main characters. In just a short 15-minute film, the characters seem unique, well-rounded and developed.

Each short film is unique and stands out in its own right. For example, “The Ninth Jedi”’s protagonist is reminiscent of Studio Ghibli’s protagonists from “Kiki’s Delivery Service” or “Spirited Away”. “T0-B1” is a fantastic homage to “Astroboy” while “Lop & Ocho” is a visually stunning and emotional family drama.

Sadly, not all short films are created equal. “Tatooine Rhapsody”, by Studio Colorido, is fun and cute, but does not dive into the characters and world enough to be interesting.

“Akakiri” is visually interesting and entertaining, but like “Tatooine Rhapsody”, it lacks the time needed to really get into the characters and feel the emotional impact of their decisions.

“THE TWINS” is fantastically animated and the effects and lighting are some of TRIGGER’s best over-the-top science fiction work. Still, the story is predictable, cliched and sadly lacking.

Overall, Disney+ made a fantastic decision to dive into the “Star Wars”  universe in a television format. The animations are striking and unique, giving a much needed outside look at the “Star Wars” universe.