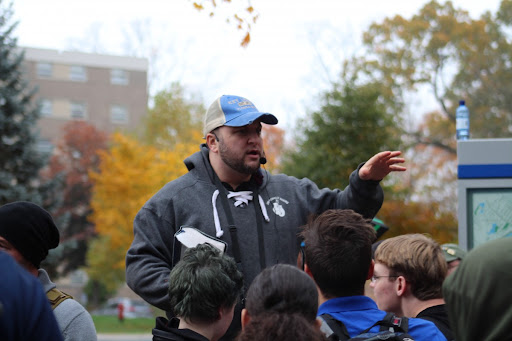 (Photo courtesy of Brigid Archibald/ UMass Lowell Connector)  The group came to campus to spread their message about sin.

When I first heard about Sin Awareness Day, I was absolutely baffled. I could not believe it was a real thing. Later, the research I did about this shocked me to my core. Articles popped up about students, at U.S. universities, being harassed on campus by people with signs that claim, “evolution is a lie!” and “homosexuality is a sin!”

Often, these events are carried out by right-leaning evangelical organizations who, according to themselves, promote the word of the Lord by preaching to passersby. However, it is not preaching so much as it is yelling horrific things at students who are just trying to go to class, and then getting irrationally angry when ignored.

The concept of “sin awareness” comes from different hardcore, right-wing Christians and the organizations that they represent, insisting that they are making people aware of their sins. According to these people, sins include, but are not limited to, believing in evolution, supporting LGBTQ people, being a Democrat or liberal, supporting Barack Obama in any way, being LGBTQ, being an immigrant, having immigrant parents, thinking sexual assault is a bad thing, having bright colored hair, wearing a skirt, wearing revealing tops, being anything other than Christian and more.

There were some horrific things that were done to students by these protestors. An article published by the Associated Press revealed that a former UMass Lowell student was asked by a protestor to name “one thing that makes sexual assault wrong.”

At Dickinson College, a protestor held a sign rallying against the 23rd chromosome, for some reason I cannot figure out. At Southern Illinois University, a protestor yelled homophobic slurs.

I want to make it clear in this article – I come from a non-Christian, but religious family. I am not bashing Christians in this article, nor religious people in general. I also know from experience that most Christians are not like this and are very accepting, wonderful and kind.

The reason I don’t like Sin Awareness Day is because students are being harassed on campus, and it the protest spreads hate loudly. No offense to the protestors but as a religious person myself, I would never be caught spreading hate in the name of God, because I believe God loves all and created us to be amazingly diverse. To yell at students and harass and upset them is plain wrong.

Technically, we cannot do anything about it. Since the quads are public, the protestors get to continue spreading hate. The university cannot remove them from their places. All we can really do as students is spread messages of acceptance and ignore the protestors on campus. It is the best that we can do, and what we should be doing for our campus community.