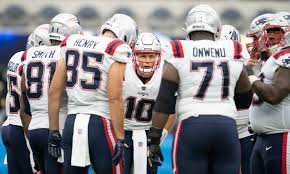 (Photo courtesy of NFL) The New England Patriots secured a big win against the Tennessee Titans, the final score being 36-13.

The New England Patriots secured a big win against the Tennessee Titans, the final score being 36-13.

The Titans came to Foxborough riddled with injuries. With wide receivers A.J. Brown and Julio Jones as well as running back Derrick Henry out, the Titans entered another week with a tough opponent. However, despite the injuries, the Titans continued to maintain an 8-3 record up until their game with New England.

The game started with Tennessee’s offense stalling out on their first drive. Afterwards, New England got the ball and quickly charged downfield, scoring off of a pass into the end zone to wide receiver Kendrick Bourne.

The Titans, however, did not let their offense stall for long. They responded to the Patriots score by methodically rushing downfield themselves and scoring off a one-yard screen pass to wide receiver Nick Westbrook-Ikhine.

After kicker Randy Bullock missed the extra point, the Patriots offense seized the opportunity and rolled downfield on their following possession. However, despite getting to the redzone quickly, the Patriots ultimately fell short and settled for a field-goal, making the score 10-6.

For much of the second quarter, the Patriots kept Tennessee out of the endzone. However, the Titans defense also held the Patriots to only field goals for the entire quarter. With one minute left before halftime, Patriots quarterback Mac Jones attempted to hit tight end Hunter Henry towards the endzone. However, Henry would miss the pass, and again, New England settled for a field goal.

The Titans came away with a huge play before halftime on their following possession. Running back Dontrell Hilliard rushed for 68 yards and into the endzone for a touchdown, raising their score to 13 and making the game much closer.

Early in the third quarter, Tennessee running back D’Onta Foreman came away with a huge rush. However, Patriots cornerback J.C. Jackson would punch the ball out of his hands, and eventually safety Jalen Mills would recover it for the New England team in a resulting turnover.

For the remainder of the game, the Titans would be unable to score again. Meanwhile, the Patriots would continue to sneak away with the game.

Tight end Jonnu Smith, against his former team in the Titans, caught three passes for 49 yards. He came away with a game long 20-yard reception.

Wide receiver Kendrick Bourne caught five passes for 61 yards and two touchdowns. His game long came in the middle of the third quarter. As snow fell on the ground, quarterback Mac Jones completed a short pass to Bourne, before he made a quick move, rushing along the sideline past defenders for a 41-yard receiving touchdown.

With the win, the Patriots rose to an 8-4 record, retaining first place in the AFC East division and second behind the Baltimore Ravens in the AFC entirely.

On Thanksgiving, The Las Vegas Raiders pulled off a big overtime win against the Dallas Cowboys, the final score being 36-33.

With the win, the Raiders stay alive in the playoff race.

The AFC Playoff race continues to tighten as 12 of the 16 teams hold a win percentage at or higher than .500, thus raising the stakes for teams to continue winning as only seven playoff spots are available.

The Buffalo Bills won over the New Orleans Saints the night of Thanksgiving, the final score was 31-6.

The Tampa Bay Buccaneers came away with a win against the Indianapolis Colts, the final score being 38-31.

Quarterback Tom Brady finished throwing 25/34 for 226 yards, one touchdown and one interception. For the Colts, quarterback Carson Wentz threw 27/44 for 306 yards, three touchdowns and two interceptions.

The Cincinnati Bengals won their second game against their divisional rival, the Pittsburgh Steelers, this season, the final score being 41-10.

Cincinnati running back Joe Mixon rushed for 165 yards on 28 attempts, scoring two rushing touchdowns and securing his third 100-plus yard rushing game of the season.

The Patriots, will look ahead to a continuously toughening stretch of games. They fly out to face the Buffalo Bills next, for the first time this season.