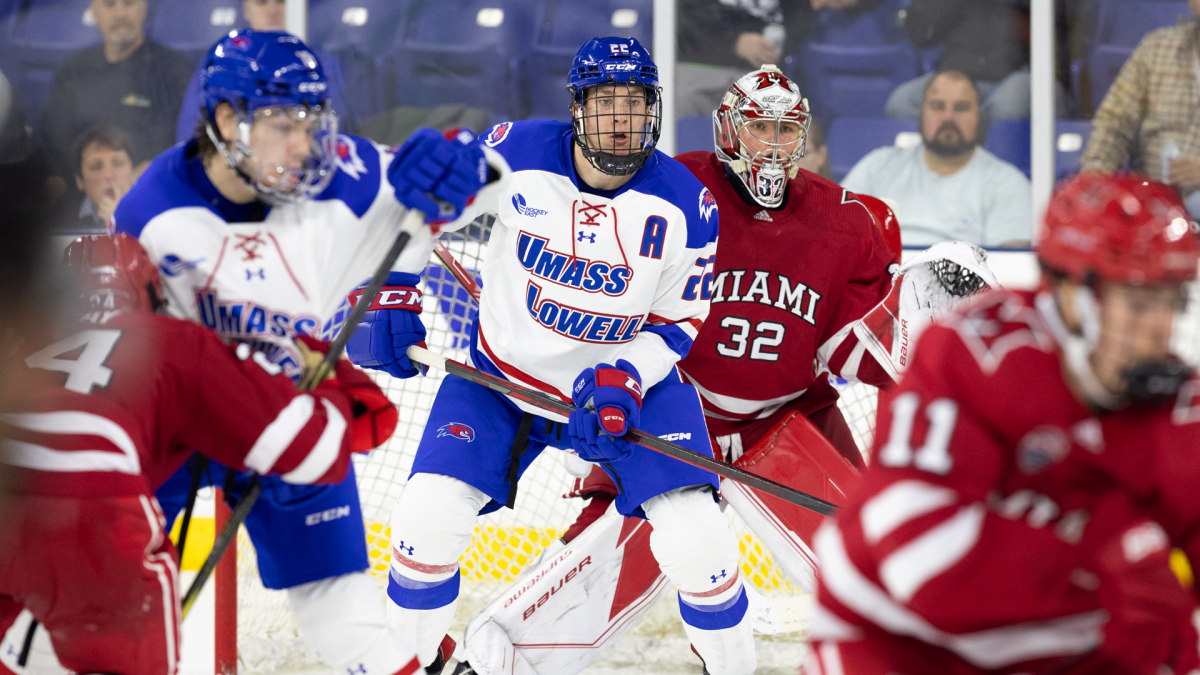 This past weekend, the River Hawks hosted Miami University (Ohio) and split the two-game series evenly with a loss on Friday and a win on Saturday.

Leading into the Friday game, after riding a dominant victory from the week before in which they beat the St. Lawrence Saints with a score of 4-0, UMass Lowell looked to continue to build a winning streak ahead of their long away-game series.

The game, however, would start a little slow for the River Hawks. Forced on the defensive early, the Miami RedHawks pushed the pace against UMass Lowell and applied offensive pressure quickly.

The first goal of the game would go against the River Hawks at 9:35 in the second period. RedHawks forward Max Dukovac would carry the puck up the right wing and pass it across the ice to forward Artur Turansky who would take the quick opportunity and put the RedHawks up 1-0.

The RedHawks would then take a 2-0 lead when forward Joe Cassetti would help redirect a shot past Gustavs Davis Grigals and take their second goal of the game.

The opposition would score their third and final goal of the game late. Off a pass from Cassetti, forward Max Dukovac would carry the puck up the left wing, weave past River Hawks defenders and slip a back-handed shot over the shoulder of Gustavs Davis Grigals.

The River Hawks only goal of the game would come in the final minute of the third period. Off a pass from Jon McDonald, defenseman Ben Meehan would take a slap shot at the top of the left wing, which would be redirected by forward Blake Bells who sat in front of the net and slid it past the reaching glove of the RedHawks goaltender, giving UMass Lowell their first and only goal of the night.

The RedHawks would take 29 shots against the River Hawks, while UMass Lowell would lay 39 shots on their opponent. River Hawks forward Blake Wells, forward Carl Berglund and forward Scott Truman combined for 21 of the total shots on net and laid the pressure on the RedHawks.

Looking to bounce back, the River Hawks entered the Tsongas Center the following Saturday to try and split the weekend series.

Early in the rematch, at 13:09 on a RedHawks powerplay, Joe Cassetti, carrying the puck from the left wing to the top of the slot, would pass the puck across the ice to defenseman Hampus Rydqvist, who would take a shot towards the goal. The River Hawks would block the shot, but off the rebound forward Matthew Barbolini would knock the pass backwards past the reaching Gustavs Davis Grigals. Forward Ryan Savage would weave through three defending River Hawks to take the quick opportunity and put the RedHawks up 1-0.

In response, the River Hawks bounced back and kept the RedHawks from scoring for the rest of the period. At 10:36 of the second period, on the RedHawks half of the ice, River Hawks forward Marek Korencik would save a puck from slipping past the offside line and send a shot towards the goal from the top of the left wing. Forward Nick Rhéaume would help redirect the shot and give the River Hawks their first goal of the night.

The River Hawks kept up the offensive pressure. Later in the game, off a pass from the bottom left of the RedHawks net, forward Filip Fornåå Svensson would take a shot from the right wing and lay it just past the glove of the RedHawks goaltender.

The RedHawks scored their second and last goal of the night off a quick shot from forward PJ Fletcher, taking the shot off a pass from Ryan Savage.

The River Hawks score four goals on the night, two of which came from Carl Berglund, and one each from defenseman Marek Korencik and Filip Fornåå Svensson. The River Hawks would tie their shots on goal from last night with 39 shots, versus the RedHawks who took four less shots than the night before with 24 shots.

The River Hawks now fly out to Michigan State for two back-to-back games on Thursday and Friday before coming back to face Northeastern the following Saturday. With three away games looming on their schedule, the River Hawks will look to build on their success and come away with some wins.