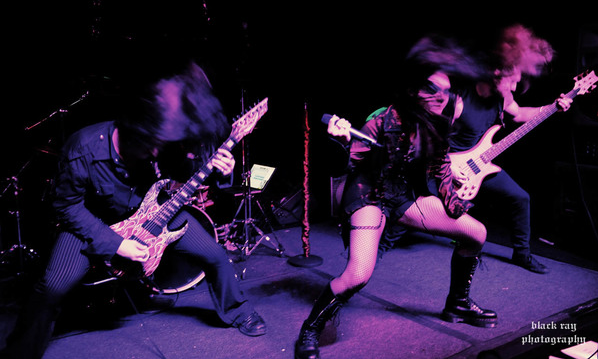 Coming out of the gates like the mightiest of monsters crawling from the blackness of the mind, Seven Spires debut EP “The Cabaret of Dreams” is one of the most solid pieces of symphonic metal in the past decade, due in large part to stellar composition, production and character that most young groups only dream of. One of the first things that the listener will likely notice about this release, in fact, is a key example of what sets Seven Spires apart from others: instead of playing like a mixed-bag EP, their first bit of material actually plays the concept album game, and plays it well. The 26-minute CD plays like a Dream Theater-esque epic a la “The Count of Tuscany” or “A Change of Seasons,” except that it demands to be listened to again and again. Each of the three times that I popped this disc into my car stereo, I listened to it at least twice consecutively. That’s not laziness – that’s this reviewer being floored by the talent of this group.

The group is fronted by Adrienne Cowan, who also handles the impeccably tasteful keyboards and orchestrations. By the halfway mark of the EP, Cowan locks herself in as a powerful vocalist with character to boot. Equal parts Simone Simons and Alice Cooper, Cowan doesn’t just ask more radio-friendly singers like Tarja Turunen or Lzzy Hale to step aside – she sounds as though she eats them for breakfast.

Looking back at the individual tracks, the most noteworthy aspects of the structure are in the first three tracks and the final one. Clearly inspired by opera and classical music, listeners will find themselves entranced and imprinted by the simple yet brilliant theme that persists throughout the beginning of the album. “100 Days” is a far calmer composition than the soul-stealing sideshow on the rest of the EP, but as the last track, it ends the CD on an interesting note, one that showcases the range symphonic metal has been known to demand from its best groups, while also leaving the same need to revisit and await more material from Seven Spires.

The excellent taste that Seven Spires displays in their composition and orchestration is further exemplified by my personal struggle to recall, after first listen, if this EP contained any of the typical death-growls or screams that female-fronted bands are wont to employ while trying to enforce a “heavier” sound. After listening again, I was actually rather impressed: while these kinds of added vocals are present, they are neither extreme nor overused enough to give the band’s admirable style any kind of “me too” vibe, in the crowd of other bands that they draw comparison to.

Production on the EP is phenomenal, as is demanded by the symphonic crowd, and with good reason. Produced by Sascha Paeth (Edguy, Kamelot, Epica), the quality breaks the barrier of “crystal-clear,” and does the incredibly talented members the justice they have shown they deserve. Guitarist Jack Kosto channels the most melodic bits from neoclassical legends like Michael Angelo Batio and Randy Rhoads to deliver both haunting leads and shredding flurries of notes that don’t oversaturate a release that represents both direction and diversity that are seldom seen in any debut. Drummer Anthony Medaglia and bassist Cameron Tidman also combine with Kosto to form a backing band of intense admirability. Heaviness is neither sacrificed nor leaned upon, yet is so prevalent, sharp and powerful that it clearly could be a crutch in the unlikely event that it need to be. Tight rhythm, strong riff work and emotional melody all combine across the entire band to cement the places of each and every musician in Seven Spires as soon-to-be fixtures of the most epic of epic metal, both in the local scene and, hopefully, in markets that will skyrocket them to venues that can properly house the barrage of fury and emotion that is “The Cabaret of Dreams.”