After two years of Division I competition for the UMass Lowell women’s basketball team, star guards Shannon Samuels and Jasmine McRoy will play their final game for the River Hawks Tuesday night.

The two have played for the River Hawks for the last two seasons, which, according to Director of Athletics Dana Skinner, gave the team “the ability to compete at a Division I level immediately.”

The duo earned Second Team All-America East honors last season and have continued to make waves this year. Both players are currently top-15 scorers in America East, accounting for a combined average of 26.3 points per game, and the guards are two of the top six three-point shooters in the conference, statistically. 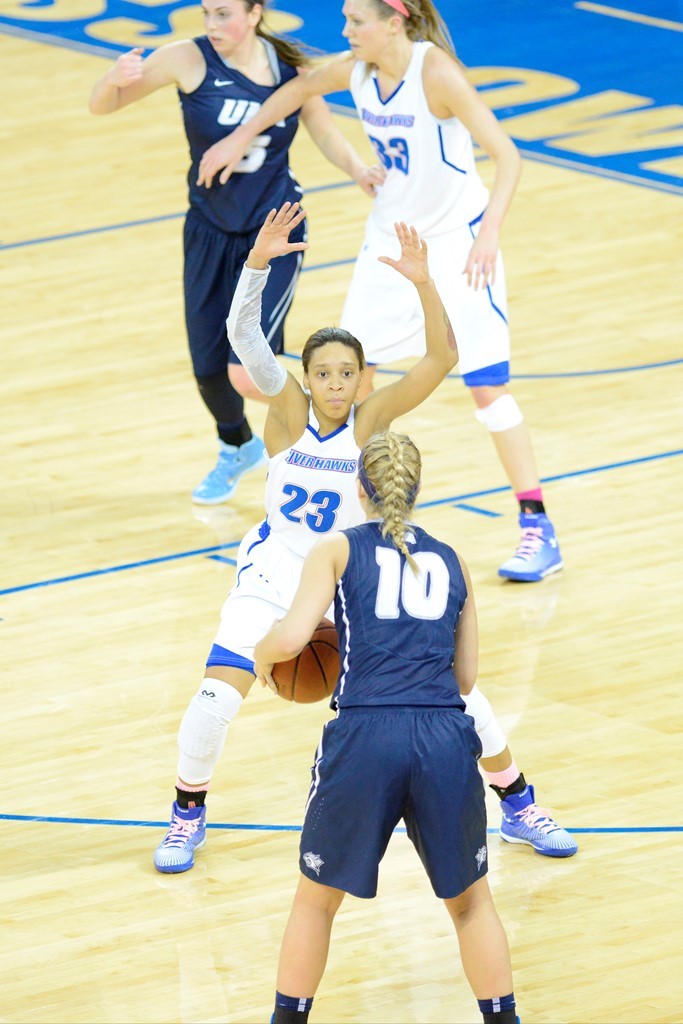 Despite their success at the Division I level over the last two seasons, both players said their roads to basketball success were unclear at first.

Samuels and McRoy started their college basketball journeys in the National Junior College Athletic Association (NJCAA) at Roxbury Community College in Boston and Monroe College in New Rochelle, N.Y., respectively. Both took the junior college route as a detour to Division I play, which Samuels said was a helpful experience in terms of preparation and competition.

“That was a good experience for me because, even though it was a junior college level, we played a lot of tough teams, so I got to experience it well,” Samuels said.

Along with individual growth on the court, McRoy’s basketball résumé additionally includes an NJCAA National Championship with Monroe College in 2012. She said the school’s recruitment level was a key component in the team being a perennial contender and her decision to go to Monroe.

“Monroe’s a school where, it’s like, they go to the nationals every year,” said McRoy. “and it’s almost guaranteed, ’cause their recruitment level is so high.”

Samuels and McRoy faced off on the court the following season, guarding each other as point guards for their respective teams. While Samuels’ squad earned a 71-53 win over McRoy and her team, she said the individual competition between the two was tightly contested.

As rivals, and as teammates, Samuels and McRoy have basketball styles that complement each other quite well. First-year Head Coach Jenerrie Harris said their cohesion has been a direct result of their familiarity with each other over the last two seasons.

“They know what the other player wants to do and what they’re capable of doing,” said Harris. “Jasmine will kick the ball up to Shannon in the open court just so that Shannon can make a pass right back to Jasmine for a lay-up, or so that Jasmine can trail for a three because Jasmine wants to get her shot off.” 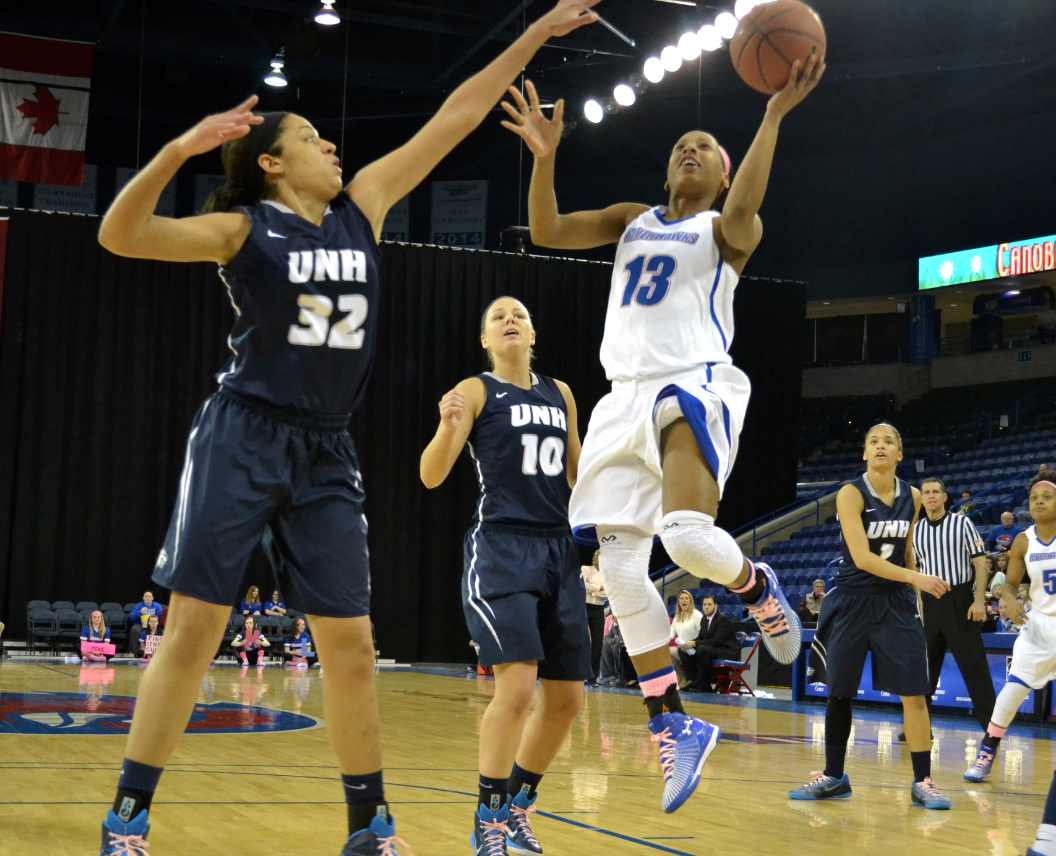 The River Hawks finished tied for sixth place in conference play last season. Though the team only won five games all season, four of them were America East victories. The River Hawks also had the second-highest scoring average as a team in the conference during that season, thanks to a combined 29.6 points per game from Samuels and McRoy.

Their individual successes did not come without a share of obstacles for each to hurdle off the court. For McRoy, the passing of her grandfather about four years ago nearly ended her basketball career.

McRoy said her grandfather was a permanent fixture at her basketball games throughout her life and that she felt as though she “lost basketball completely” when he died. She said, however, that she talked to one of her high school teachers at Watkins Mill High School in Gaithersburg, Md. the day after her grandfather died, looking for advice.

Samuels said she almost stopped playing basketball and nearly didn’t attend college altogether when she became pregnant during her senior year of high school. She said at the time she wasn’t going to go to college or play basketball until conversing with her mother and Roxbury Community College Head Coach Mark Leszczyk.

“He still believed in me. He still wanted me to go to school, and my mom was telling me she wanted me to pursue my dream, too,” said Samuels. “She didn’t want me to just stop [playing basketball] just because of me having a kid. She didn’t want that prevent me from pursuing my dream.”

Still, a having a child and losing a relative weren’t the only disparities Samuels and McRoy have faced.

McRoy, the second of nine children in her immediate family, said her childhood as a whole was “very, very tough.”

McRoy grew up in a neighborhood of Gaithersburg, Md. she says people rarely “make it out of,” but playing basketball was her way of going against the grain.

“I wanted to become something of myself, so I set myself to play basketball,” McRoy said, “and once I started getting into it, that’s when [my family] knew that I was serious about basketball.”

Samuels said her decision to attend Roxbury Community College and continue her basketball career after high school meant sacrificing time with her son.

“I’m not able to be at home with him. I’m not able to take care of him how I would want to, and then I have to be away from him all the time,” Samuels said.

Moving forward, Samuels and McRoy said they are interested in playing professional basketball overseas. As criminal justice majors, both said they plan to work law enforcement when their basketball careers end.

McRoy says she plans to be a detective for the sole purpose of being able to “help people who can’t be helped.” Samuels, meanwhile, said she wants to join the police academy and become a police officer, an interest she gained from her aunt and uncle, both retired correctional officers.

In just two years, one under her coaching, Harris said the impact of the backcourt duo on UMass Lowell women’s basketball is already one to be cherished.

“We’ll definitely miss having Jasmine and Shannon because they are such huge contributors for us offensively and defensively,” said Harris, “but I like the legacy that they’re leaving behind for the rest of the team.”

At the same time, Skinner said their two years here have been paramount in paving the way for a future of prominent River Hawk athletes in the coming years.

“It’s important that, as you’re elevating the program, prospective student-athletes see that you can be successful at UMass Lowell,” he said. “I think the fact that Shannon and Jasmine had such strong two-year careers here [says] there’s evidence there that other student-athletes can do the same.”

Both graduating seniors, McRoy and Samuels are set to play their final collegiate basketball game Tuesday night against New Jersey Institute of Technology. Tip-off is set for 7 p.m. at Costello Athletic Center.

Samuels said the feeling of her college basketball career is somewhat surreal and hasn’t hit her yet, but “it’s gonna be something.”

“Just playing at the Division I level was really exciting. I got to experience new things, got to play in big arenas in front of thousands of people,” Samuels said. “It’s gonna be sad for me because that’s all I’m used to: playing basketball.”

McRoy agreed: “Like she said, it hasn’t really hit us yet that it [has come] to an end, but I’m sure it will the last game, though.”