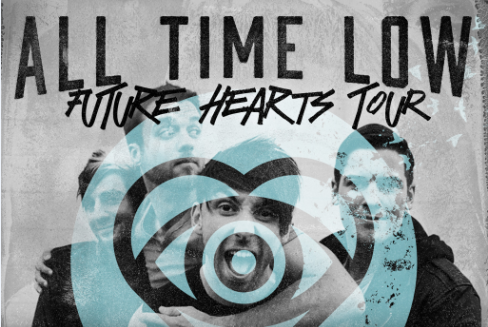 This year has been a busy one for American pop-punk band All Time Low between the release of their newest single, “Something’s Gotta Give,” and the announcement of their sixth studio album, Future Hearts, set to be released on Tues. April 7 through Hopeless Records. In honor of the release of this new album, All Time Low will be hitting the road this spring for their massive headliner “Future Hearts Tour” sponsored by Rockstar Energy. For the duration of the two-month-long tour, which kicks off on April 15 at UMass Lowell’s Tsongas Center and concludes in the band’s hometown of Baltimore, All Time Low will be sharing the stage with Australian pop-punk band Tonight Alive, Albany based pop-punk band State Champs and Atlanta metalcore band, ISSUES.

Hailing from Baltimore, M.D. and formed in 2003, All Time Low consists of vocalist and rhythm guitarist Alex Gaskarth, bassist and backing vocalist Zack Merrick, lead guitarist and backing vocalist Jack Barakat, and drummer Rian Dawson. Since their start as a high school band, All Time Low gained popularity within the pop-punk scene with the release of their second studio album, “So Wrong It’s Right,” in 2007 and have continued to gain fans over the years. Their success has earned them numerous awards such as Kerrang! Magazine’s “Best Live Band” and “Best International Band” in 2013.

Five-piece pop-punk band Tonight Alive traces their roots back to Sydney, Australia where they formed in 2008. Made up of lead vocalist Jenna McDougall, lead guitarist Whakaio Taahi, rhythm guitarist Jake Hardy, bassist Cam Adler and drummer Matt Best, Tonight Alive has been signed to Fearless Records since 2011, after the release of their debut album “What Are You So Scared Of?” Their most recent successes include being listed as one of the top 10 Australian bands in 2010 and their song “The Edge” being featured on the soundtrack of Hollywood blockbuster, “The Amazing-Spiderman 2.”

ISSUES is a metalcore band from Atlanta, G.A. that was founded in the summer of 2012 by former Woe, Is Me members Tyler Carter, Michael Bohn, Corry Ferris and Ben Ferris (both Ferris brothers later parted ways with the band). Their first EP, “Black Diamond,” was released in November of 2012; soon afterward, the band signed to Rise Records. Two years later, their debut full-length album, “ISSUES,” was released Feb. 18, 2014 where it reached the number nine spot on the Billboard 200. Since then, ISSUES has gone on to play on the Vans Warped Tour and has toured with numerous other bands such as Attila, Bring Me the Horizon, Of Mice & Men, Letlive and Beartooth.

Formed in 2010 by original members Tyler Szalkowski (lead guitarist) and Derek Discanio (lead vocalist), State Champs is a pop-punk band from Albany, N.Y.  In 2012, they signed to Pure Noise Records and their debut EP, “Overslept,” was released on Sept. 11, 2012. More recently, State Champs released their first studio album, “The Finer Things,” on Oct. 8, 2013 through Pure Noise Records. Last month, the band announced that they had completed recording their second album, though the exact track list and song titles are not finalized yet.

Tickets for the Future Hearts Tour can be purchased for $29.50 through the Tsongas Center’s website (here) and box office. The show starts at 6 p.m.