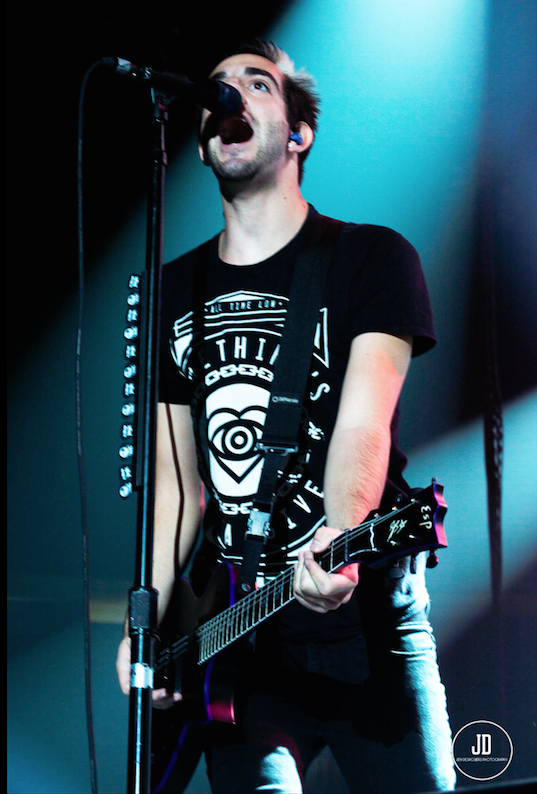 Even if you’re not a fan, it’s still fairly easy to see why Baltimore-based pop-punk band All Time Low has made quite a big name for themselves since their arrival on the scene in 2005. Over the years, the band had gone from playing at small, no-name venues to large scale arenas all over the world.

Last Wednesday, All Time Low played their fourth show at the Tsongas Center in Lowell, Mass., which kicked off their U.S. spring tour in support of their newest album, “Future Hearts.” The album has been very successful since its release on April 3, selling more than 75,000 copies in its first week and debuting at number two on the Billboard 200. Because of this, it was was no surprise that when the doors opened and hundreds of fans swarmed in, the arena filled with the buzzing of excited anticipation.

Starting off the night was State Champs, the pop-punk quintet from Albany, N.Y. Made up of Derek Discanio, Tyler Szalkowski, Ryan Scott Graham, Tony Diaz and Evan Ambrosio, State Champs have supported bands on smaller scale tours, played on the Vans Warped Tour last summer and co-headlined their very first U.S. tour last fall. Being on the Future Hearts Tour is a bit of an achievement for State Champs because this is their largest U.S. tour (not including Warped Tour) to date.

Although they were the smallest band on the tour fan-wise, State Champs definitely gained a following that night, kicking off the show by immediately launching into their most popular songs “Nothing’s Wrong,” “Deadly Conversation” and “Simple Existence.” Vocalist Derek Discanio proved that he knows how to entertain a stadium full of fans and kept the crowd going with his energetic performance as he ran across the stage and interacted with bandmates and fans alike. By the end of the set, State Champs had the entire room off of their feet, crowd surfing and singing along; there was never a dull moment during the band’s set. Ending with the song “Elevated” off their debut album, “The Finer Things,” State Champs’s performance had set the mood for the rest of the night and the crowd was left sweating, out of breath and amped up as they gave up the stage for the next act.

Australian pop-punk band Tonight Alive claimed the stage as their own as the second act of the night. Lead by frontwoman, Jenna McDougall, Tonight Alive consists of Whakaio Taahi, Jake Hardy, Cam Adler and Matt Best. Often compared to Paramore and We are the In Crowd, Tonight Alive was met with judgement from some who did not think that another female-fronted band could make it in the pop-punk scene. But seven years have passed since their formation in 2008 and the band has gone above and beyond expectations, playing major music festivals such as Warped Tour and embarking on many headlining tours.

Screams filled the arena as Tonight Alive came out on stage and it did not take much for the crowd to become completely engaged as the band opened their set with “Lonely Girl” and “The Fire,” which both had fans singing along for the duration of the songs. The band played other well known songs such as “Oceans” and “The Edge” (which was featured on the “Amazing Spiderman 2” soundtrack), keeping the crowd moving.  As a whole, Tonight Alive had an incredible stage presence, but the real star of the performance that night was McDougall.

McDougall was very interactive with the crowd during the set: she slid down onto her knees during parts of songs; held her microphone out to the crowd, prompting them to sing as loudly as they could; and gave mini speeches during breaks in between songs. Before the second-to-last song of their set,“What Are You So Scared Of?”,  McDougall asked the crowd, “What are you so scared of Lowell?” and had everyone repeat after her: “From this day, I refuse to live in fear of someone else’s judgement”, reassuring fans that Tonight Alive’s music serves as a safe place for those who listen to it.

Based on the sheer amount of engagement and energy during their set, Tonight Alive had proved that they are a force to be reckoned with, clearly showing that the band has grown immensely since their days as newcomers.

Following Tonight Alive’s performance was Issues, the six-piece metalcore/nu-metal hybrid band from Atlanta, G.A. which is made up of Tyler Carter, Michael Bohn, AJ Rebollo, Skyler Acord, Josh Manuel and Ty Acord. Labeled by Alternative Press Magazine as “the future of metalcore…”, Issues is known for their unique sound which takes the traditional sound of metal and post-hardcore and defies them by injecting elements of R&B and hip-hop. For this tour, Issues chose to give a massive ode to Pokemon, fully customizing everything to fit the theme. Their giant banner featured all of the members drawn out as anime-style versions of themselves akin to Pokemon trainer Ash Ketchum, their amps were completely decked out in neon lights and custom designed to look like Pokemon game cartridges featuring Pikachu, Charizard and Blastoise and their drum kit was customized to fit the theme as well.

Not a band to spend much time talking and giving speeches between songs, Issues played an energetic set, particularly due to vocalists Tyler Carter and Michael Bohn who both interacted with their fans and kept the crowd hyped up as they led the band though some of their most popular songs such as “Never Lose Your Flames,” “Mad at Myself” and an older fan favorite, “Princeton Ave”.

For their final song of the set, the band launched into a rendition of stand alone single “Hooligans” and as their time onstage come to an end, the last few lines of the song echoed through the crowd: “Hooligans, got big hearts but they’re just some kids. Cali made, flashy sins. Need nobody ’cause we know where we fit in.” After Issues gave one of the most energetic performances of the night, the arena was filled with a buzz once again as it was time for the act that everyone had been waiting for.

As the signature All Time Low concert banner dropped, adorned with a skull and crossbones cleverly censoring out the word “f*ck,” the room erupted into a roar of screaming teenage girls as the band came out on stage. Because the tour was named after the band’s newest album, it only seemed fitting that they began their set with the live debut of “Satellite,” the first track off “Future Hearts.”

Playing a range of songs from their entire discography, which included “Lost in Stereo” and “Dear Maria, Count Me In,” Gaskarth, with the help of drummer Rian Dawson, bassist Zack Merrick and guitarist Jack Barakat, had the crowd off their feet and singing along at the top of their lungs. All throughout the show, bras were being thrown onto the stage (a  tradition at All Time Low shows) which were collected by Barakat on his microphone stand. After their closing song, “Something’s Gotta Give,” during which the confetti cannon fired into in the crowd, the arena filled with chanting as fans begged for an encore.

Zack Merrick sings along during “Satellite”
(Photo by Jen Desrosiers/Connector)

Of course, All Time Low was happy to comply and starting off with “Kids in the Dark”, the band played a three song encore. Taking back a few years, the band launched into“Jasey Rae”, off of their their 2006 EP “Put Up Or Shut Up”, and fan favorite “Dear Maria, Count Me In”, concluding the night with cheers from the crowd and more confetti.

All Time Low has certainly proved that they are still one of the number one bands in the pop-punk scene, and deserving of the fan base that they have accumulated over the last 10 years. The release of “Future Hearts” only brought more fans and success for the band and it’s clear that All Time Low is not going anywhere anytime soon.