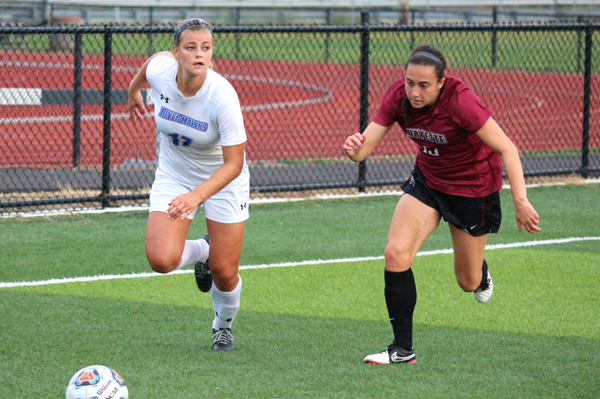 Shannon Groffie looks to make a play against a Lafayette defender. (George DeLuca/Connector)

The UMass Lowell women’s soccer team came “ready to play” against the Lafayette Leopards at Cushing Field on Friday. Both teams fought hard for the win, but Lafayette was able to hold off an onslaught of furious River Hawk attacks in the second half.

It was another heartbreaking loss for the home team, but there were many positives about this game that will hopefully pay dividends as the season continues to unfold.

Lafayette controlled possession for much of the first half, before freshman midfielder, Katie Brannigan scored at 11:22 on a rebound off River Hawk freshman goalie Julia Schneider (3 saves).

Schneider had one of her best games of the season, looking poised and confident throughout the game. At 6:20 of the first half, Lafayette was awarded a free kick which sailed towards the upper right corner. But Schneider timed her jump perfectly to corral the ball, energizing her teammates who responded by raising the level of their collective game.

“I think we absorbed a lot of pressure in the first half,” said River Hawk Coach Joel Bancroft. “If you start to break down where they had the ball it was more out on the flanks…We were figuring things out, and, we had a couple of effective counter attacks as well.”

The River Hawks kept the ball in the Lafayette end, somewhat mirroring the success the Leopards had in the first half, by executing a series of coordinated drives with determination, focus and precision

Although Lafayette was able to make the adjustments they needed to get back in the game, both teams played tenaciously for the rest of the way. UMass Lowell won a moral victory by showing that they can play effectively with teams sporting winning records. Lafayette is now 4-1.

Perhaps the biggest takeaway for the coaching staff was that the River Hawks recovered after a somewhat tumultuous first half, while sustaining their intensity level for the entire game. The team’s drop in energy level and lack of a sense of urgency has been a troubling factor in previous defeats, as they seemed to have trouble with stamina, running out of steam during key moments in previous games.

When asked for his thoughts about the reason for this surge in productivity, Coach Bancroft said, “I think that it’s the chemistry of the personnel that’s playing. We made some changes late in the Holy Cross game, putting in younger players who hadn’t really been given a shot, and we allowed them to play a little more today. They played with a little more bite, with a little more sense of urgency.”

Sophomore forward Shannon Groffie (3 shots) showed leadership; raising the level of her game as injuries took two key players for Lowell. Unfortunately, starting sophomore midfielder Rachel Morrier, who has three goals so far this year, was one of those players on the injured list. River Hawk Captain and senior back Colleen Corliss went down with an injury five minutes into the game.

Freshman midfielder Maddie Walsh (3 shots) helped compensate as she caught fire, playing with grit and abandon while sparking her teammates. As a result, the River Hawks began to band together, keeping the ball in the Lafayette end for much of the second half.

When asked about the impact of the loss of key players, Coach Bancroft responded, “You don’t replace a player like Rachel Shannon, so we had to adjust. We overcame a lot of adversity, but not enough to get a result.”

After the road trip, the River Hawks will then end their season with eight consecutive games against conference opponents.  The squad will attempt to improve their 2-5-1 record that they posted against America East rivals in the 2014 campaign.  The River Hawks will hopefully use this road trip to get some momentum heading into their conference play.

Bancroft said, “Those are the games that if you weigh one versus the other, every team has to do well in their conference because that’s how you gain entrance into the NCAA tournament…I think that the schedule we put together being so strong is going to prepare us well for what looks to be a very strong America East schedule.”

Bancroft was pleased with his team’s performance, and he was hopeful that the team’s progress and momentum will carry forward. “I thought we worked really hard, and if we continue to work at that level, things are going to change in the wins and loss column.”