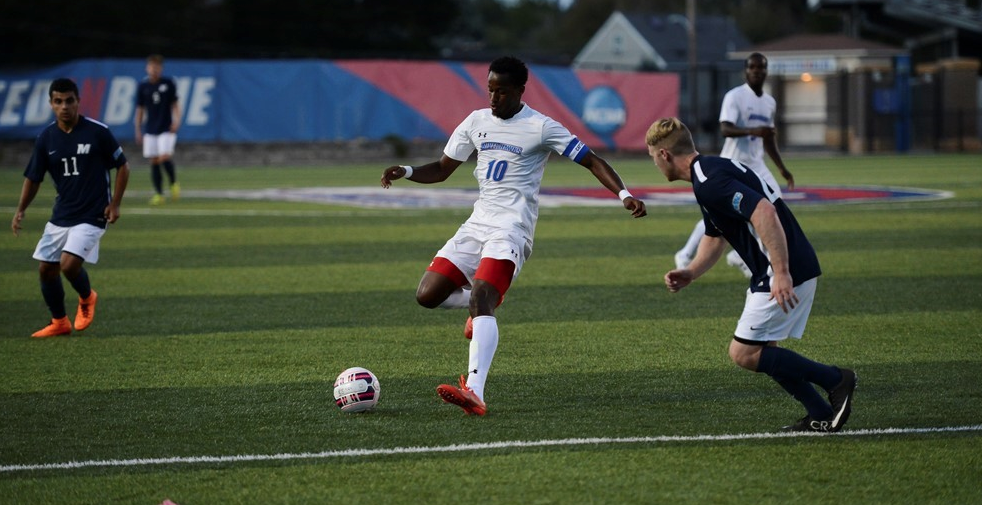 In what proved to be a thrilling game at Cushing Field on Friday night, the River Hawks men’s soccer team held on to defeat Monmouth University by a final of 1-0. The game had a feeling of a heated rivalry, with the intensity only growing as the match progressed. Tempers certainly flared, but it was the River Hawks who came away victorious against their ranked opposition.

Red-shirt freshman Paul Beatty was the source of the only goal in tonight’s bout. Beatty broke away down the right side of the pitch, and the ball found him with just one defender to beat. A slick little juke move between his legs gave Beatty the time and space he needed to bury a shot in the bottom-right side of the goal behind Monmouth keeper Eric Klenofsky. The goal came with 8:39 left to play in the first half, and gave Lowell the lead it would never surrender.

Coach Christian Figueroa’s team seemed to pick up right where it left off last season. The squad finished the 2014 campaign with a 5-0-1 record against all but one conference opponent during that stretch. The soccer teams’ recent success has not gone unnoticed, and the big win tonight has this season looking very bright.

While itis in a coach’s nature to always strive to get more out of their players, Figueroas could not help but be pleased by the way his team performed. “To get out here right off the bat and play a team of that much quality, it’s a good test for us. I thought our guys did a good job preparing leading up to this game, they executed well, and the energy was high,” he said.

The energy certainly did intensify the last ten minutes of action, as Monmouth sent everything they had on attack against the River Hawks in search for the equalizer. Lowell goalkeeper Austin Kroll dove hard to the left side of his net to make a fantastic save late in the second half. Monmouth found itself with arguably its best scoring chance of the night with a near two on one opportunity. The Monmouth forward choose to strike the ball instead of give it up, but Kroll was there make the stop.

It was a solid defensive night for the River Hawks. Kroll only had to make three saves, and even that number would seem high to someone who was at the game. Lowell’s formations on defense kept Monmouth players frustrated the entire match.

Last year, Monmouth crushed Lowell 5-0 in both team’s season opener down in West Long Branch, N.J. “I think the nerves got to us a little bit last year,” Figueroa said about the 2014 matchup. When asked if this win felt a little better than most knowing what transpired in last year’s game, Figueroa cracked a smile, “It does…it was nice to get those guys here at home.”

The squad will now enjoy this hard fought victory, and gear up for their game against Utah Valley on Sunday, Aug. 30.