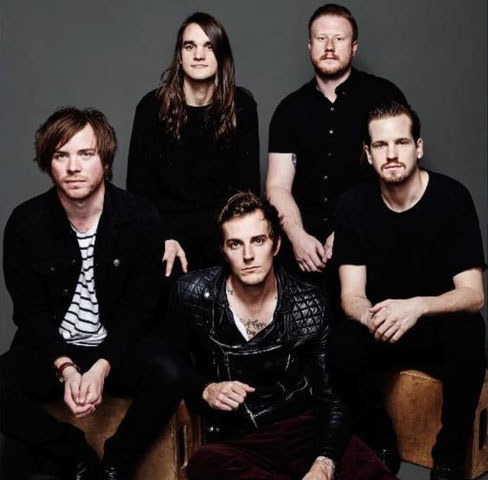 Even if you are not a fan or have not even heard of The Maine, it is no surprise they have made a name for themselves in the music scene. The Maine writes most of their songs about personal struggles – something that makes their songs quite emotional.

The Maine put on a show at The Sinclair last weekend along with opening band Beach Weather. This was the kick off for their fall U.S. tour which promoted their latest release titled “American Candy”. The album reached number 37 on the Billboard 200, so it was no surprise that they played a sold out show.

The night started off with the opening band Beach Weather, fronted by lead singer Nick Santino, who was also the front man of the band A Rocket To The Moon. Their set had a relaxed feel and atmosphere about it. These are the types of songs that are perfect for just hanging out with friends or driving on the road. Only having played about 20 shows so far in their career, Beach Weather gained a following and a huge jump start by opening for The Maine, something that will hopefully make them successful in the future. They rocked the stage and ultimately got fans more excited for the rest of the show.

As soon as The Maine’s drums were set up, the crowd erupted into a roar of excitement because it was finally the time they had all been waiting for. The Maine played nearly 20 songs which included old and new favorites that got everyone off of their feet. Lead vocalist John O’Callaghan started off by thanking fans for their support and promised them a great time. Surprisingly, it also happened to be guitarist Kennedy Brock’s birthday, so of course, a fan-led rendition of “Happy Birthday” was a must. Drummer Pat Kirch and guitarist Jared Monaco even helped make a speech honoring Kennedy and his contributions to the band.

Their set started off by playing the album, “American Candy” front to back. Naturally, the crowd was ecstatic about this, considering the band hasn’t had much of a chance to play their new material yet. Opening with “Miles Away,” the first single off “American Candy,” each member of the band poured their heart and soul into playing this new record. The amount of energy in the room never faltered.

Even though “American Candy” is a solid record, the fans were waiting for the “oldies but goodies” portion of their set. They played fan favorites such as “Inside of You,” “Everything I Ask For” and “Some Days” One thing for sure is, regardless what of The Maine performs on stage, they always make sure to have the best stage presence and energy. Along with this, The Maine played a two song encore including “Everything I Ask For” and their new song “Another Night On Mars.” The encore gave fans the opportunity to get closer to the band, as O’Callaghan walked off stage and into the crowd which goes to show how much they truly appreciate their fans.