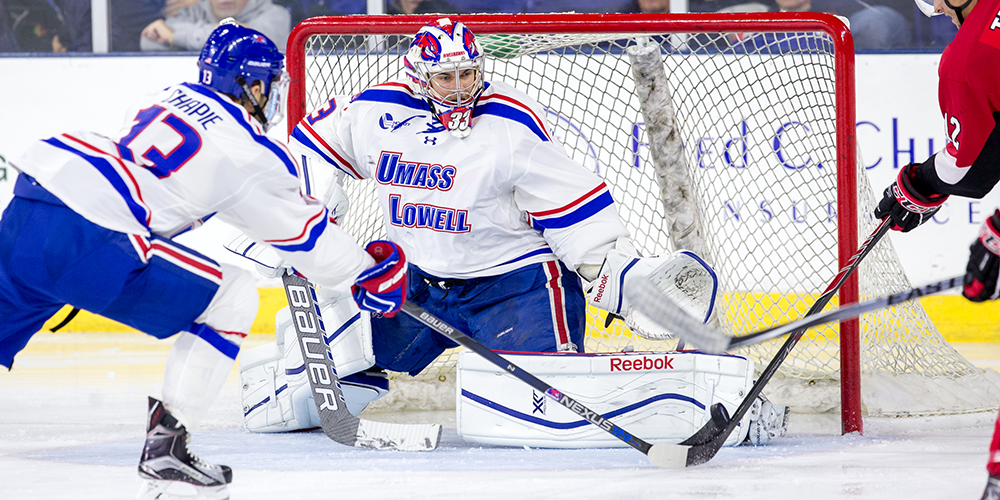 The UMass Lowell hockey team earned a 2-1 win over the University of Maine Friday night at the Tsongas Center in the first half of a home-and-home series.

The Black Bears came into the game off a seven-game losing streak, while the River Hawks entered with a three-game win streak and a fifth-place ranking in the nation.

Head Coach Norm Bazin stressed that the weekend would not be easy for the River Hawks. “There are several things that concern me about Maine,” he said. “They’re tenacious, they cycle well, they’ve got great team speed, [and] they’re well-coached.”

A strength for the River Hawks coming into the game was the stellar performance of their main goaltender, Kevin Boyle, who boasted a .949 save percentage through nine previous starts.

Both teams spent about half of the time in each other’s zones, but the first period ended scoreless. A breakaway chance by Ryan McGrath sent the fans up from their seats in anticipation, but Maine goaltender Rob McGovern sent them back down disappointed.

The River Hawks had two more solid breakaway chances in the first ten minutes of the period, the first on a 3-on-2 with Adam Chapie (Oxford, Mich.) turned away by McGovern, and the second by C.J. Smith. The River Hawks had only one chance to test their power play but came up empty in the goal category.

Both goaltenders faced a plethora of shots, with UMass Lowell registering nine shots on goals to the Black Bears’ ten.

The second period revealed the game to ultimately be a duel of the goaltenders, as shots on goal remained close between both teams for the entire period, culminating in an even 19-19 at the end of it.

UMass Lowell was capable defensively, especially during two crucial penalty kills. The team’s defense and Boyle’s backstopping kept the River Hawks in the game, which Bazin noted as a major effect on the game’s result.

Although the River Hawks started off the third period killing off the majority of a penalty, their increased intensity paid off.

In a period that Coach Bazin said was the River Hawks’ strongest, Michael Kapla broke McGovern’s resolve in a snipe that went right through McGovern’s legs.

Kapla described the scoring play: “It started with a faceoff there, and [Adam Chapie] was working around the corner and he passed to Master who got it to me. I was fortunate enough to be in a good position to shoot the puck.”

When asked whether he was surprised to score between McGovern’s “wickets,” Kapla said, “I just put the puck on net and hope for the best.”

UMass Lowell goaltender Kevin Boyle was the first star of the night for his performance, which included a crucial glove save with six minutes remaining and the River Hawks holding onto a one-goal lead.

Smith added an insurance goal for the River Hawks with an empty netter in the final minute of the game. The Black Bears answered with a goal of their own with thirty seconds remaining.

Bazin said he was grateful for the result: “Points in Hockey East are tough to come by. So, whenever you get them, you have to be very happy, regardless of whether it was a perfect game, because I don’t think there is such a thing.”

The River Hawks head to Orono, Maine for the final game of the series Sunday afternoon at 5 p.m.