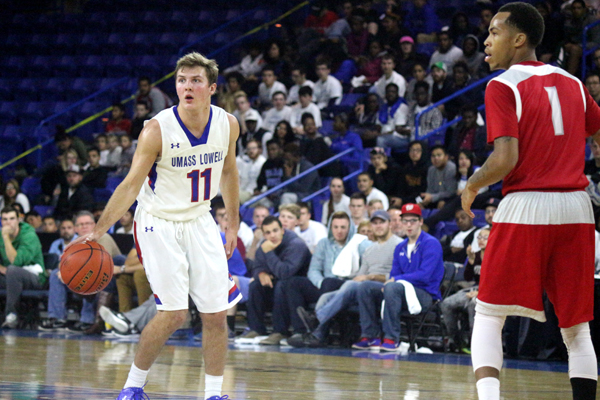 Freshman Isaac White looks to make a play against a Sacred Heart defender. (Photo by GeorgeDeLuca/Connector)

The UMass Lowell men’s basketball team earned their first of the season with an 87-84 victory over Sacred Heart Wednesday night at the Tsongas Center.

“I was happy with the way we played,” said Head Coach Pat Duquette. “Everybody knows we are a young team with eight freshmen, and to win a close game down the stretch is a credit to them. We scored a lot of points, which I think is a good thing even though we’ve always been more of a defensive oriented team.”

The River Hawks broke an 84-84 tie with 1.3 seconds left in the game when freshman guard Isaac White drove to the basket and converted a left-handed layup over three Pioneer defenders. White finished the three-point play with a free throw and the game with 17 points.

The game remained close the entire way through, as Sacred Heart continually battled back from deficits of eight or more points to keep the game within striking distance.

The team surged to a 15-7 lead to open the game in the first four minutes of the game behind fast-paced offensive play. Sophomore Jahad Thomas scored seven of his game-high 20 points during that stretch.

A catalyst for the team’s scoring, Thomas said it was important to have a big game at home coming back from an ACL injury last season.

“It definitely game me confidence knowing that I’m feeling like I’m getting back to where I used to be,” said Thomas, “and just having my teammates and coaching staff and everyone believe in me, it helps a lot.”

The River Hawks went to halftime with a 55-47 lead, but it quickly evaporated after four straight Pioneer baskets.

UMass Lowell later led by as many as 10 points halfway through the second half, up 75-65, but 15 unanswered points by the Pioneers left them trailing 75-80 with just over four minutes to play.

While Sacred Heart only played eight players during the game, 11 players saw time on the court for the River Hawks, including five in double figures—Thomas, White, senior guard Mark Cornelius and freshman guards Ryan Jones and Keith Hayes. The River Hawks scored 43 points off the bench compared to the Pioneers’ 15.

Cornelius’s layup with 1:19 left in the game put the River Hawks up 84-82 before the Pioneers sophomore guard Cane Broome tied the game with a layup of his own in the final minute of play.

Sacred Heart outrebounded the smaller UMass Lowell team 37-29 but committed more than twice as many turnovers—25 to the River Hawks’ 12.

The River Hawks improve to 1-1, while Sacred Heart falls to 1-2 on the season. Wednesday night’s win marked the team’s first victory at the Tsongas Center in their Division I era.

UMass Lowell faces No. 18 Notre Dame in their next matchup Saturday afternoon in South Bend, Ind.