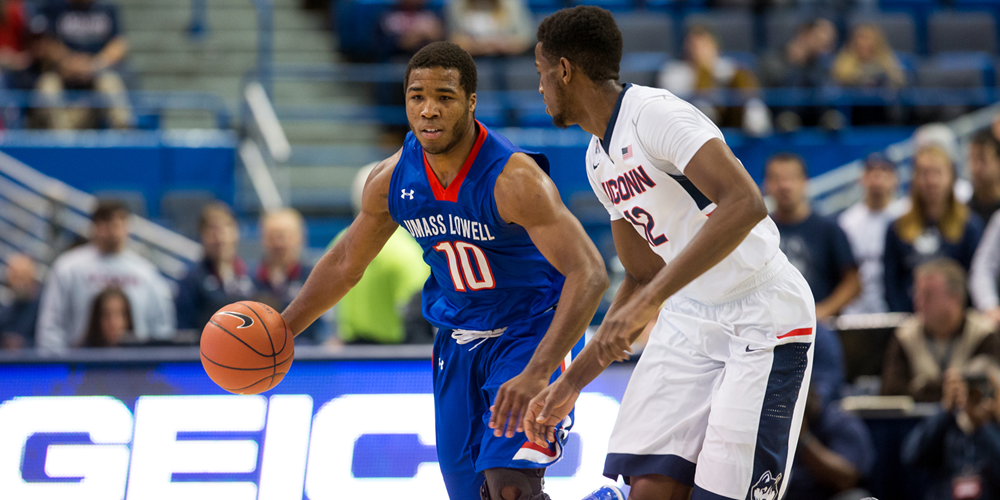 The UMass Lowell men’s basketball team (4-7) put their offense to the test against No. 25 UConn (7-3), but it wasn’t enough to beat the Huskies, falling 88-79 Sunday afternoon at the XL Center in Hartford, Conn.

The River Hawks spread the ball around well offensively with four double-digit scorers on the afternoon—Jahad Thomas with 19 points, Josh Gantz with 18 and Isaac White and Matt Harris with 11 each.

The team shot 50 percent from the floor and 40 percent from beyond the arc against a UConn team missing their 7-foot starting center Amidah Brimah. The River Hawks were able to score 28 points in the paint against the Huskies in Brimah’s absence, led by Thomas’s strong work of getting to the basket throughout the game.

“I was happy with the way we played,” said UMass Lowell head coach Pat Duquette. “We played good offensively; we spaced the floor; we shared the ball, and we played hard on the defensive end. We handled their pressure, which was, going into the game, a concern of mine given their athleticism. I thought we did a good job mixing up their sets and handling their pressure. I think we only had 12 turnovers for the game, so [it was] a pretty good day for us.”

The River Hawks were not able to sufficiently slow UConn defensively, as the Huskies shot 32-for-50 (64 percent) from the field. UConn forward Rodney Purvis scored a season-high 28 points and went 10-for-14 from the floor to help the Huskies pull away from the River Hawks.

The River Hawks went to halftime facing a 43-37 deficit. Thomas and Mark Cornelius led the team with nine and seven points, respectively, at the intermission. UConn’s Sterling Gibbs and Purvis led the Huskies with 12 and 10 each.

UConn forward Shonn Miller opened the scoring with a dunk to give the Huskies a 2-0 lead. The River Hawks then scored the next five points on a Ryan Jones layup and a Matt Harris 3-pointer 1:19 into the half.

UMass Lowell was able to build a six-point margin, leading 25-19 from a jump shot by Thomas, with 10 minutes to play in the first half. Philip Nolan’s layup with 8:41 left in the half put the Huskies on top 26-25 after seven straight points by UConn.

After Huskies guard Sterling Gibbs’ 3-pointer broke a 29-29 tie with 7:33 to play in the half, UMass Lowell was not able to regain the lead for the rest of the game.

The River Hawks kept pace with the Huskies offensively for most of the contest. After trailing by as many as 14 points in the second half, the River Hawks battled back to cut the deficit to six, trailing 81-75 in the last 90 seconds of the game.

Strong free throw shooting down the homestretch, however, helped UConn stave off the River Hawks and maintain the lead to close out the game.

UConn head coach Kevin Ollie said he was satisfied with his team’s effort against the River Hawks.

“They played great. Pat is doing a great job,” said Ollie. “They spread the court. It’s kinda unorthodox with a 6’2” four-man and a five-man that’s shooting threes. You don’t play against that all the time. These games really challenge your defense, and they challenged our defense, but once again we came out with a victory, and I’m proud of our guys…”

Sunday’s contest marked the first between UMass Lowell and UConn in men’s basketball. The River Hawks also saw four double-digit scorers for the seventh time in their 11 games this season.

“That’s about as good as we can play at this point,” said Duquette. “We’ve got a lot of young guys who are still developing, but I’m happy with the way they played today.”

After a holiday break, the River Hawks travel to Piscataway, N.J. to face the Rutgers Scarlet Knights on Dec. 28 at 7 p.m.