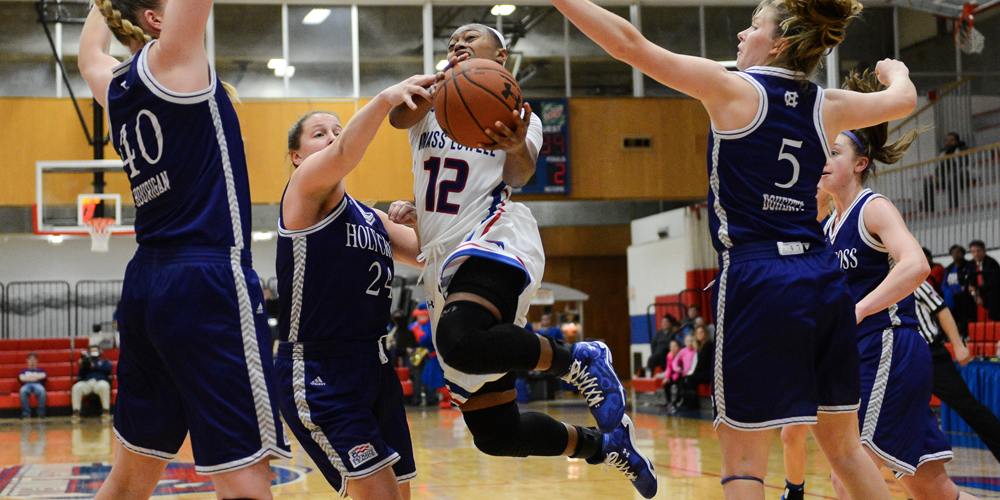 The UMass Lowell women’s basketball team earned their second win of the season against Holy Cross in a 75-67 point game on Wednesday night at Costello Athletic Center.

“It’s just nice to be able to come out and play a good team and just play good basketball and just see these ladies perform at a high level and come out with a win,” said Head Coach Jenerrie Harris.

Junior guard Asia Mitchell-Owens scored a career-high 22 points during the match. “It feels awesome, but what feels even more awesome is the fact that we got a win and as a team pulled it out,” said Mitchell-Owens about her accomplishment.

Another milestone of the night came from senior guard Melissa Frase, who earned her 100th career 3-pointer in the third quarter.

The River Hawks started the night with a strong lead. While Holy Cross scored first, the opening minutes would be the only lead for the Crusaders for the night as UMass Lowell scored 12 unanswered points to gain an early lead that would carry them to victory. UMass Lowell’s strong defensive first period, featuring nine defensive rebounds, kept Holy Cross to only eight points in the quarter.

The second quarter saw a slower game from the River Hawks, who struggled to maintain their impressive early lead. Holy Cross outscored UMass Lowell by six points in the quarter. UMass Lowell struggled offensively, seeing eight turnovers and putting up only 15 points compared to the 21 points earned by Holy Cross. The first half ended with the River Hawks leading only by nine points.

The second half opened with a jumper from Doucette to get the River Hawks back on track. The high-pressure third quarter saw Holy Cross, who outscored the River Hawks 17-13, start to close in on the lead. Holy Cross improved defensively as well, earning 14 rebounds and three steals in the quarter.

The fourth quarter opened up with a River Hawk lead of seven and a layup by Frase. UMass Lowell slowed their offensive game down while Holy Cross increased pressure across the entire court. As the final quarter neared the final minutes of the game, UMass Lowell’s lead increased for the final time, as Holy Cross committed 11 fouls under the 5-minute mark, which UMass Lowell capitalized on to earn 10 points from free throws. The game ended with an eight-point River Hawk victory and improved their record to 2-7.

The River Hawks also improved to 2-2 at home with the win Wednesday night. “It feels great, we’ve been so excited for this game,” said senior forward Lindsey Doucette. “We’ve been playing so well as a team and we just wanted to focus on ourselves and get this win, especially home.”

The River Hawks next head to New Jersey to face Fairleigh Dickinson on Friday, Dec.18th.