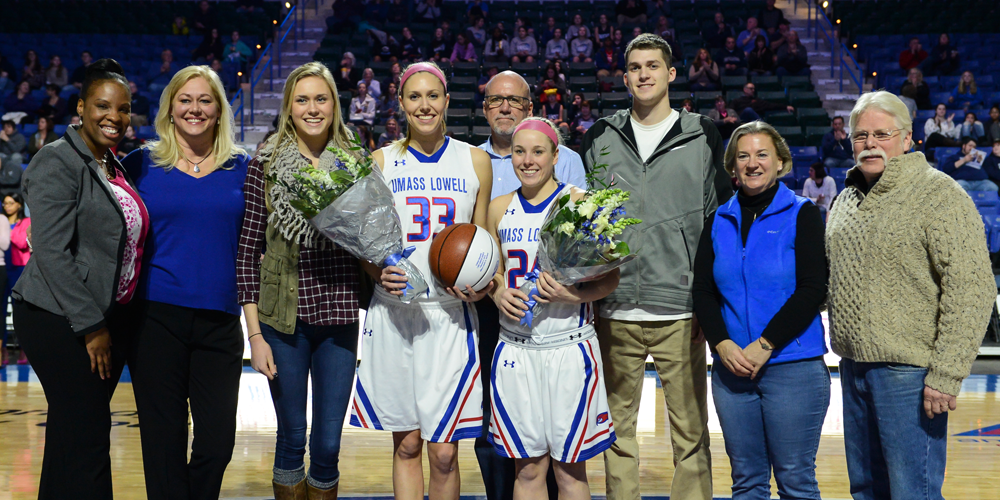 The UMass Lowell women’s basketball team (4-22, 1-13 AE) fell to the University of New Hampshire Wildcats (10-16, 4-9 AE) in the final minutes, losing 63-55 in their last home game of the season Wednesday night at the Tsongas Center.

“We were beating ourselves up a little bit, we giving up too many offensive rebounds, the timing on our plays were off. We wanted to have a little more of an attacking mentality.” Head Coach Jenerrie Harris said on the loss and offensive struggles of the River Hawks.

Despite strong efforts from seniors Lindsey Doucette and Melissa Frase, who both tallied 15 points in the game, the River Hawks were not able to earn a victory in a hard-fought battle against the Wildcats.

The pair of seniors celebrated their college careers with a bittersweet final home game at the Tsongas.

“It’s always great to play at the Tsongas Center,” said Frase. “There’s always so much energy, so many kids. It’s a mixture of emotions right now, I can’t believe it’s really almost over but playing here is always really great.”

The River Hawks came alive in the second quarter, putting up 18 points. A UMass Lowell time out halfway through the quarter allowed the River Hawks to regroup and refocus.

The third quarter featured strong defense from the River Hawks, but UMass Lowell was unable to capitalize on offense. Travelling calls plagued UMass Lowell’s offensive chances, and the River Hawks saw five turnovers in the quarter.

The third quarter also contained the smallest UNH lead of the game, where UMass Lowell trailed by just one after a layup from Doucette to bring the score to 42-41 with 2:31 left in the period.

UMass Lowell maintained a close game throughout the final quarter, but missed offensive chances kept the River Hawks on the wrong side of the score. The physical quarter, which had five fouls from both teams, saw momentum from the River Hawks until the end.

The Wildcats pulled away, however, when Elizabeth Belanger’s three-pointer put them up by 10 with 5:49 left in the game, tying their largest lead of the game. A pair of free throws by Kristen Anderson put the game out of reach for good at 63-55 with 29 seconds to play.

UMass Lowell will travel to Binghamton on Feb. 20 for a 2 p.m. tip-off in another America East matchup.