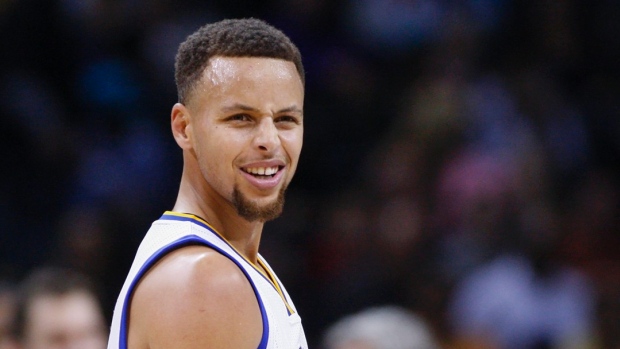 Curry has heard what some legends have said about him, and he flat out does not care (Photo courtesy of the Canadian Press)
Kyle Gaudette
Connector Editor

There is absolutely nothing more annoying than ignorance.

Raise your hand if you have ever been told by a parent, grandparent or just an older relative in generally of how much better things were back in their heyday? If your hand is not up I would be as shocked as I was when I found out Leo DiCaprio won an Oscar for a three-hour long movie where all he did was grunt and walk around.

DiCaprio’s “acting” aside, a lot has been made recently about the current NBA – the incredible play of Stephen Curry to be more precise. Curry is the league’s reigning MVP, has led his Warriors to the best start a team has ever had to a season currently at 54-5 and his Player Efficiency Rating of 32.93 is on pace to shatter Wilt Chamberlain’s single-season record. Curry already broke the single-season three-point record that he set last year in under sixty games this season and has the Warriors positioned to win back-to-back NBA championships.

Yet out came all-time greats like Isiah Thomas and Oscar Robertson telling us about how they walked five miles uphill both ways in a snowstorm to get to school every day, and how they loved it because it built character – whatever that means. Okay so maybe they didn’t say that exactly, but they might as well have.

Robertson spent an entire segment on a radio show dismissing Curry’s accomplishments, arguing that coaches today are “stupid and don’t know how to coach defense,” while confidently predicting that “he (Curry) would be shut down” in his era.

The ignorance is maddening.

How can anyone not see the way Curry is revolutionizing the game of basketball? If you could only use one stat to define Curry’s season, it would be his ridiculous 67 percent shooting… FROM BEYOND 28 FEET! And it’s not like that is a two-for-three 67 percent, Curry has over fifty attempts from beyond that range.

Robertson was the LeBron James of his generation. He obviously was not the size of LeBron, but he came into the league with an impressive physique and an all-around game to match. Robertson took home a ring over his career and is one of the greatest players to ever step on a basketball court skill-wise.

In the 1961-62 season, Robertson ensured his name would be remembered forever by posting a record that will never be broken. That season, Robertson averaged a triple-double, posting 30.8 points per game, 11.4 assists and 12.5 rebounds. In todays NBA, guys are considered in the upper-echelon of talent if they can manage ten or more triple-doubles in a season.

Also don’t forget that the Robertson vs. National Basketball Ass’n lawsuit in 1976 paved the way for players to have more rights when it comes to switching teams. Every time a high-end player cashes in on free agency, they have Robertson to thank.

It’s not like Curry is this big, LeBron-esque type guy who just overpowers defenses driving to the lane. He leaves that to his jump shot. The scrawny kid from Davidson, whose nickname for a while in the NBA was “middle schooler” because of his boyish looks, is not physically making the game his like Robertson did.

Is the NBA different now than it was when Robertson played? Of course it is. But why does a guy get less credit for changing the game now than a guy like Robertson did forty years ago?

Coaches are not to blame for electing to pass on double or even triple teaming Curry a what-is-now-necessary thirty feet from the hoop. Of course Robertson is right when he says coaches don’t know how to defend Curry – because no one has been able to.

The game of basketball when you played was beautiful, Oscar. It was arguably more beautiful than the game today, and nobody will ever forget what you were able to accomplish.

But what’s the matter Big-0? Is Chef Curry cooking up some jealousy?