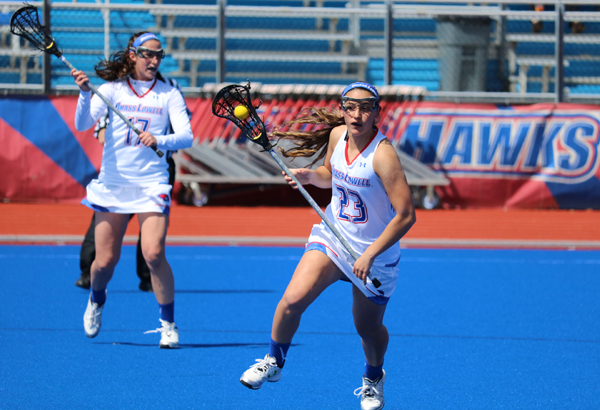 UMass Lowell women’s lacrosse (1-13) faced off against the Brown University Bears (5-7) on Tuesday night in what ended up being a 5-4 River Hawk loss.

The River Hawks were looking for their second win of the season but fell short in the final minutes of the match.

The 5-4 loss featured goals from four different River Hawks, including one from sophomore attack Taylor Sokol, who leads the team in points with 20, and is tied for the most goals with 14. She also leads the team along with fellow goal scorer of the night, freshman attack Noelle Lambert, in assists with six each.

The visiting Bears notched a pair of early goals against the River Hawks to take an early lead. Brown was able to convert three more of their shots into goals in the first half.

Offensively, the River Hawks struggled early on. While given several chances to even the score against Brown, UMass Lowell was unable to work through Brown’s defense, which featured a double team during the open minutes of the contest.

Freshman midfielder Kendyl Finelli scored the River Hawks’ lone goal of the first half with only 15 seconds remaining before the break.

The first half featured a strong showing from UMass Lowell’s defense, which was able to limit Brown to just two goals after the first five minutes of the match. Sophomore goalkeeper Courtney Barrett made several key saves during the half to keep the River Hawks in the game.

After the break, UMass Lowell came out strong on offense. A goal five minutes into the half from Sokol gave way to a more dominant half for the River Hawks. UMass Lowell worked the ball around Brown’s end of the field on offense, but several turnovers kept them from scoring until late in the half. With less than ten minutes to play, UMass Lowell netted a pair of goals to bring the score to within one point. A few late shot attempts were saved or blocked by the Bears.

UMass Lowell saw defensive improvements after the half, keeping Brown to just one goal after the break. Barrett made several more saves for the River Hawks to earn six for the night. UMass Lowell was also able to force three turnovers in the half to maintain possession.

The overall physical contest saw a total of 41 fouls, with 20 committed by UMass Lowell and 21 by Brown. 29 of those fouls were committed in the second half as the goal differential lessened in the final minutes.

The River Hawks will travel to face off against Albany on Saturday in an America East matchup.