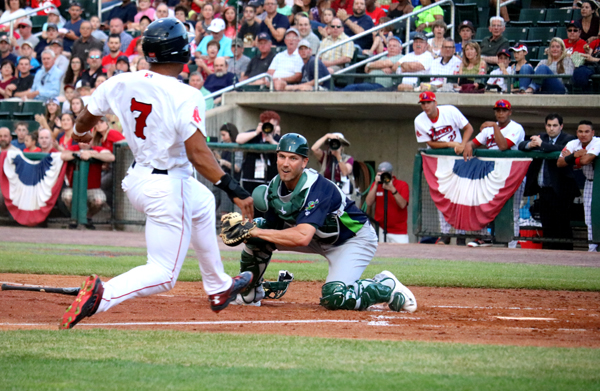 Spinners left fielder Tyler Hill is tagged out at the plate by Vermont catcher Carson Blair. (Photo by George DeLuca/Connector)

Spinners baseball is back in Lowell and the fans loved every minute of opening day “Spinnertainment,” as the local favorites for the 2016 New York-Penn League crown got underway last night at LeLacheur Park. It was a party-like atmosphere for the sellout crowd of 5,014. A 1-0 win over the Vermont Lake Monsters turned out to be the icing on the cake.

Lowell politicians and other dignitaries were in abundance for the opening ceremonies. UMass Lowell was well represented by Athletic Director Dana Skinner and Political Science guru Frank Talty. Congresswoman Niki Tsongas gave one of several keynote addresses. But the poignant moment of the evening involved a changing of the guard, as an emotional Drew Weber ceremoniously turned the team over to new owner Dave Heller.

Once the game got underway, pitcher Michael Kopech lived up to his reputation for throwing the heat as the radar gun consistently registered 96-97 and up to 101 mph. Kopech pitched 4 1/3 innings of shutout ball in front of an appreciative crowd, garnering 4 strikeouts, while allowing 4 walks and 4 hits. Judging by his performance, he won’t be wearing a Spinners uniform for long.

Another star of the game was left fielder Tyler Hill, who was outstanding both in the field and at the plate. Hill went 2 for 2 with a double and a single. Infielder Roldani Baldwin added another 2 hits for the Spinners including a double. And right fielder Chris Madera drove in the winning run in the fifth inning on a single that scored catcher Isaias Lucena.

Middle reliever Pat Goetze got the win, and Dioscar Romero earned the save.

The Spinners will finish a two-game series with Vermont today. Williamsport comes to Lowell tomorrow for three games extending the home stand to Tuesday. The Spinners then head out for their first road trip of the season against Hudson Valley, before returning home on Saturday for a three game series against Tri-State.