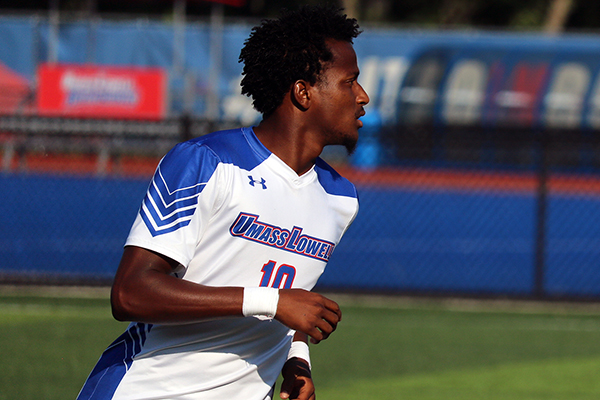 Fernandes is a major reason for the men’s soccer team’s success this season. (Photo/George DeLuca)

In 2009, Wuilito Fernandes came to the United States from Praia, Cape Verde, a small city on an island located about 500 miles west of Senegal, Africa. He played soccer as much as he could back home, but the sport didn’t really figure into his future plans until he crossed the pond.

The Cape Verde native’s enthusiasm for soccer has risen since his arrival at UMass Lowell. “I like it here. I feel good being here and enjoying it a lot,” he said with a smile. “I have always loved soccer, but I haven’t taken it as seriously as I’m taking it now.”

Fernandes, a senior business major, joined the UMass Lowell River Hawks men’s soccer team in 2012, the year the program was accepted into the American East Conference. Next year, after Fernandes graduates, the team will be eligible for NCAA Division I tournament play.

In essence, Fernandes has helped enhance the team’s future prospects on its way to the promise land of college soccer.

Currently, the River Hawks are undefeated with a record of 7-0-1, and Fernandes is the team’s top goal scorer with six. “We’re aware of the record, but we’re not done yet,” he said. “We’re going to keep working hard. There’s room for improvement and we’re going to keep doing whatever it is that we have to do to win games.”

River Hawk goaltender Austin Kroll touted the forward/midfielder’s ability to inspire the team when the chips are down. “Every time it looks like we’re in a bad stretch, or maybe when we need some motivation, Wuilito’s always the one clapping, being vocal,” said Kroll. “He always provides that spark. He finds that time when we need to score. He’s a spark plug for us.”

Standout freshman Ivan Abramovic agrees that the team becomes energized when Fernandes enters the game. “Definitely—I feel that every single guy on the team feels that, like, ‘Ok, we’re good, he’s coming in.’ He’s just a great support out there, because when he steps in, other teams know Wuilito’s in it. Every other team knows Wuilito and they just have to think about him. He opens space for everybody else and for himself too.”

Fernandes has skills and abilities that are readily apparent to the coaches. “He has this creativity side that makes him a special player and more dangerous,” said head coach Christian Figueroa. “He can be unpredictable in a way that helps create opportunities for the team. We’ve seen him do some spectacular things on the field in the past few years.”

But there’s more to Fernandes than his skills on the turf. He also exhibits drive, discipline, and a desire to win games. And according to the coach, these qualities are contagious.

Figueroa is impressed by Fernandes’s work ethic and the way it rubs off on his teammates. “He’s been an outstanding role model for the team since he’s been here,” Figueroa said. “He’s a mature young man who’s willing to bring anybody in, new faces, guys that have been here, anyone who’s struggling, whatever the case might be.”

Abramovic, who leads UMass Lowell in points, agreed with the coach. “Wuilito is definitely a role model on the field and off. He acts the way you should be acting on the field,” he said. “He’s telling the freshmen what to do and how to act. Even with the seniors and captains, he arranges meetings to help with team bonding. He is, I think, the biggest role model we have on the team.”

In order to be an effective role model, a player must first earn the respect and trust of his teammates. It helps to have the confidence of the coach. “Wuilito doesn’t treat anybody differently,” said Figueroa. “The guys see that. They feed off it. That makes you feel good about his development, not just as a player but as a person.”

No one on the soccer field appreciates team unity and preparation more than the goalie. Kroll values his teammate’s presence because it boosts morale on the field. “Wuilito has a calming presence,” said Kroll. “Everything he says, you’re just down with it. You know that he’s there to help you both on and off the field.”

Fernandes understands his role and values the team’s unity and chemistry. “The guys are like facilitators,” he said. “They make my job really easy. I don’t have to put that much effort to lead the team, because we have such good followers. Good followers turn out to be good leaders. I try my best to be an example for my teammates both on and off the field.”

Abramovic had to adjust to his first year as a River Hawk this year and Fernandes was there for him. “He’s just a great guy overall,” said Abramovic, “He stepped up to help me when I came, which was especially helpful for me as I came from a different continent (Croatia in Europe). He was the first guy to show me around.”

Fernandes sums up his motivation: “Whatever it is I have to do to help the team win, that’s exactly what I’m going to do.”

And that’s the way the coach likes it. “When he gets out there, he has a great attitude,” Figueroa said. “He believes he can have a positive impact on the game. He’s competitive and he’s always trying to give you the best of himself—whether in training or in the games.”