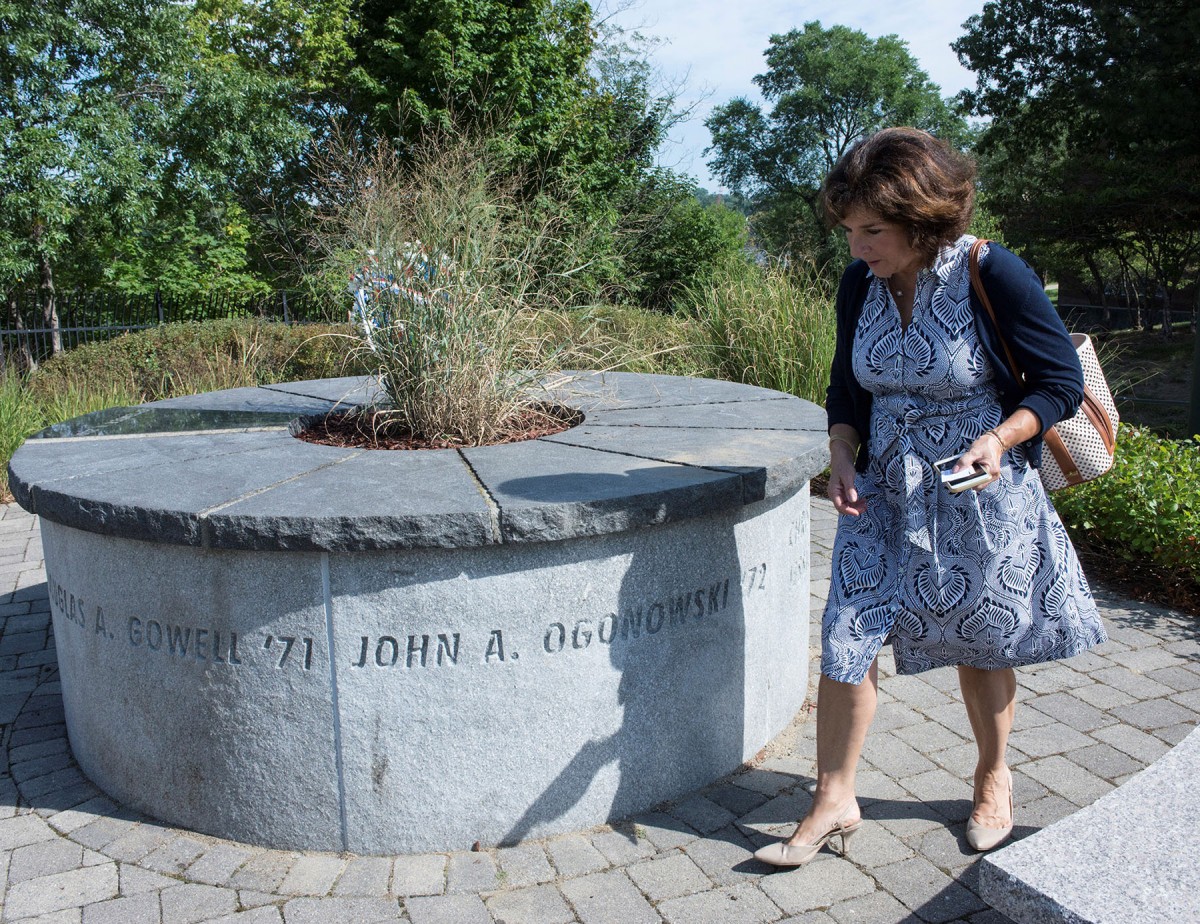 In honor of the 15th anniversary of the 9/11 terrorist attacks, UMass Lowell held a memorial ceremony to commemorate the seven members of the campus community who tragically lost their lives that fateful day. At approximately 9:30 a.m. the remembrance service began outside Leitch Hall. The ceremony took place under a tent, just in front of the 9/11 memorial to the right of the building. Among those of attendance were friends and family of the victims, Chancellor Jacquie Moloney, UMass Lowell students and other members of the Lowell community.

Beginning the ceremony was a presentation of the colors by the Air Force ROTC Honor Guard and the Lowell Fire department. Next, Chancellor Jacqui Maloney introduced the first speaker, a member the UMass Lowell campus ministry to begin the services with words of comfort. During his speech, Gary Gumuchian, a pastoral intern, stated that “the fellow who coined the phrase, ‘time heals all wounds’ never suffered such a tragedy”, highlighting the great loss felt by Americans everywhere. Next to speak was Chief of Interpretation and Education of the Lowell National Historical Park, Linda Sou. Sou represented the park as a part of the construction of the 9/11 memorial outside Leitch Hall. State Senator Eileen Donoghue also offered her words at the ceremony on behalf of the Massachusetts state delegation. Donoghue’s words looked positively on the actions of the American people in wake of the attacks claiming “make no mistake the attacks were horrific, unthinkable but we saw a nation that was stunned come together”. Following a description of the memorial, Umass Lowell students Mary Connell, Niyah West, and Amaris Torres dedicated a few words about the UMass Lowell community members who were lost on 9/11. The individuals who are memorialized are Douglas A. Gowell, a 1971 graduate of Lowell Technical Institute, Robert Hayes, a 1987 graduate of UMass Lowell, Brian Kinney, a 1995 graduate of UMass Lowell, John Ogonowski, a Lowell Technical Institute 1972 graduate, Patrick Quigley IV, son of a former Lowell mayor and UMass Lowell professor, Jessica Leigh Sachs, whose parents are alumni, and Christopher Zarba, a UMass Lowell 1979 graduate.

The 9/11 memorial, “Unity”, was designed and constructed in 2004 by alumni Art students. The design came from a competition within a sculpture deign course and was selected by a committee of campus and community representatives. The idea for the structure is credited to Andre Gorgenyi, a former student and member of the Student Government Association here at UMass Lowell. The memorial is a circular piece complimented with karl foerster grass in the center to symbolize the cycle of life and rebirth. The slate top is divided into twelve segments to represent the twelve months of the year. One segment is polished and inscribed “September 11th 2001” and is risen above the others.

UMass Lowell’s 15th anniversary rededication ceremony was not merely a commemoration to the individuals of the campus community who lost their lives on September 11, 2001, but also a celebration of the courage and strength of their friends, their family, and the UMass Lowell community to unite and persevere through such horrific times. Jacqui Maloney explained how “it’s important to remember how tragically and suddenly they were taken from us”. This ceremony was a reminder to the school of just how strong we as Americans are.