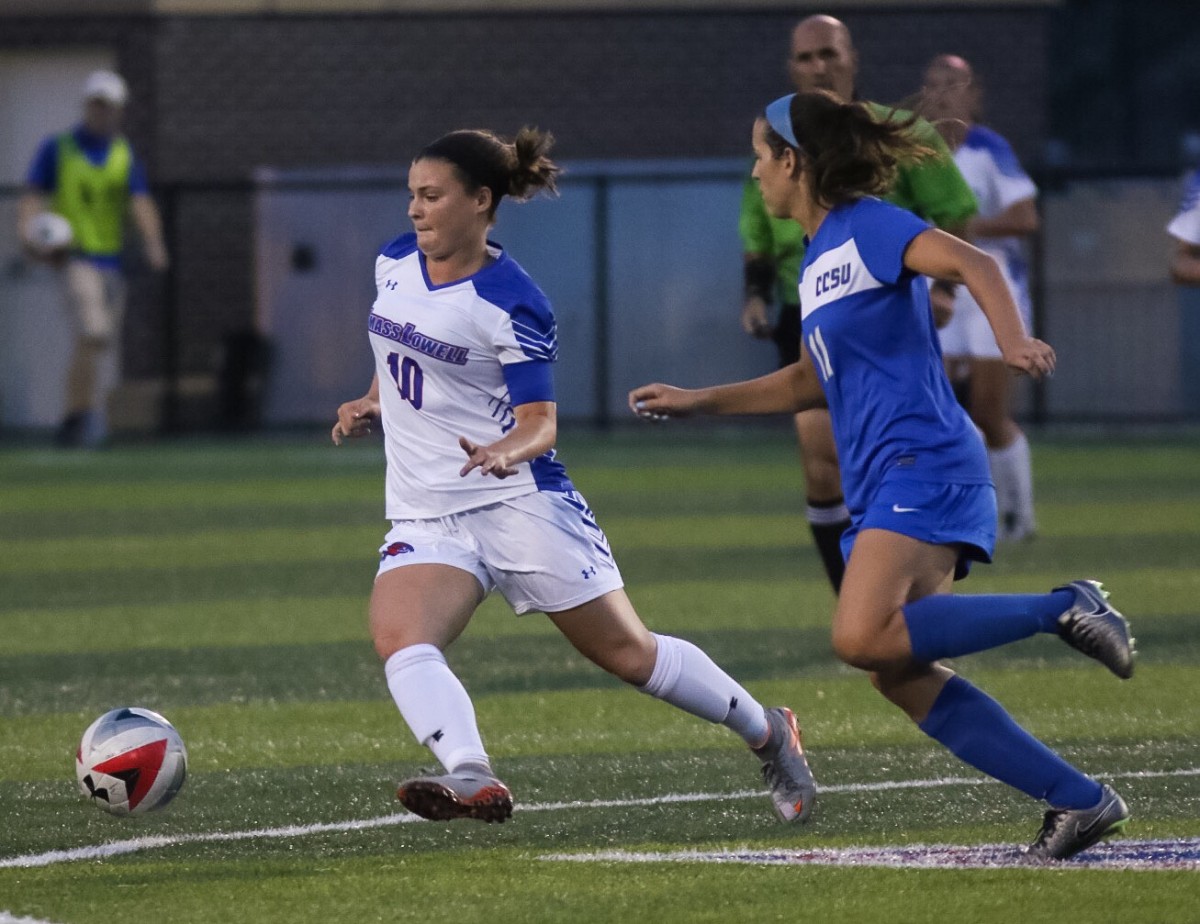 Coming out aggressively Thursday night, sights set on a redeeming victory over the Blue Devils after last year’s 4-0 loss, the River Hawks fell just short of the win with a 1-0 final score. The end result in favor of Central Connecticut State University was not, however, the entire story.

It was a hard fought back and forth game. Turnovers plagued UMass Lowell early on and resulted in an increased presence from Central Connecticut in the first half. The River Hawks maintained a strong defense throughout the half, playing strong on the ball with good tackles.

A number of fouls in the first and second half showcased the official’s intention to keep the game moving, never removing the cards from their pockets. The Blue Devils took control as the half dragged on, applying a lot of pressure on offense.

A series of near-breakaway runs by Blue Devils’ forward Danielle Pearse were challenged by the River Hawks’ defense, and disrupted by an aggressive Julia Schneider. Giving up four tough corners near the end of the half, UMass Lowell allowed one goal with only 7 seconds remaining. The corner kick by Central Connecticut’s Kelly Halligan was headed in by back Jennifer Cafferky; her first goal of the year ended Schneider’s two game shutout streak.

The game was what River Hawk Women’s Soccer Head Coach Joel Bancroft called, “A tale of two halves.” Coach Bancroft cited the desperation with which Central Connecticut State played as a result of a 0-6-0 record prior to the game.

Coach Bancroft went on to say that, “…the second half was all us.” Indeed, it was. Coming back reinvigorated after the half, the team’s focus was on one key concept. “Response.”

The River Hawk response was solid. Their defense grew stronger, responding faster and harder to shaky passes and touches by the Blue Devils. Possession time was greatly improved in the second half, as were ball movement and transitions through the middle. Being just a step behind up front, however, resulted in an inability to get through balls and crosses efficiently to their targets. A couple close calls in and around net, including a loose ball floated wonderfully to the left post by senior mid Carolyn Ragon, just couldn’t find their way into the net.

An incredibly responsive and hardworking UMass Lowell came up just short of bringing the match into overtime.

“I hope my program has a chip on their shoulder… We should step into every game with a chip on our shoulder… Does it add a little extra? Sure. We were looking forward to this game,” said Bancroft when asked about whether or not his team came out so aggressively in response to the big loss last year.

It was not, however, all bad takeaways from Thursday’s game. Both Coach Bancroft and captain Rachel Morrier stated that it wasn’t their best night, but there is no quit in the women’s soccer team at UMass Lowell. With a major road trip coming up next weekend in Colorado, the team has set its sights on preparation, and plans to take confidence from their close defeat at the hands of Central Connecticut State.