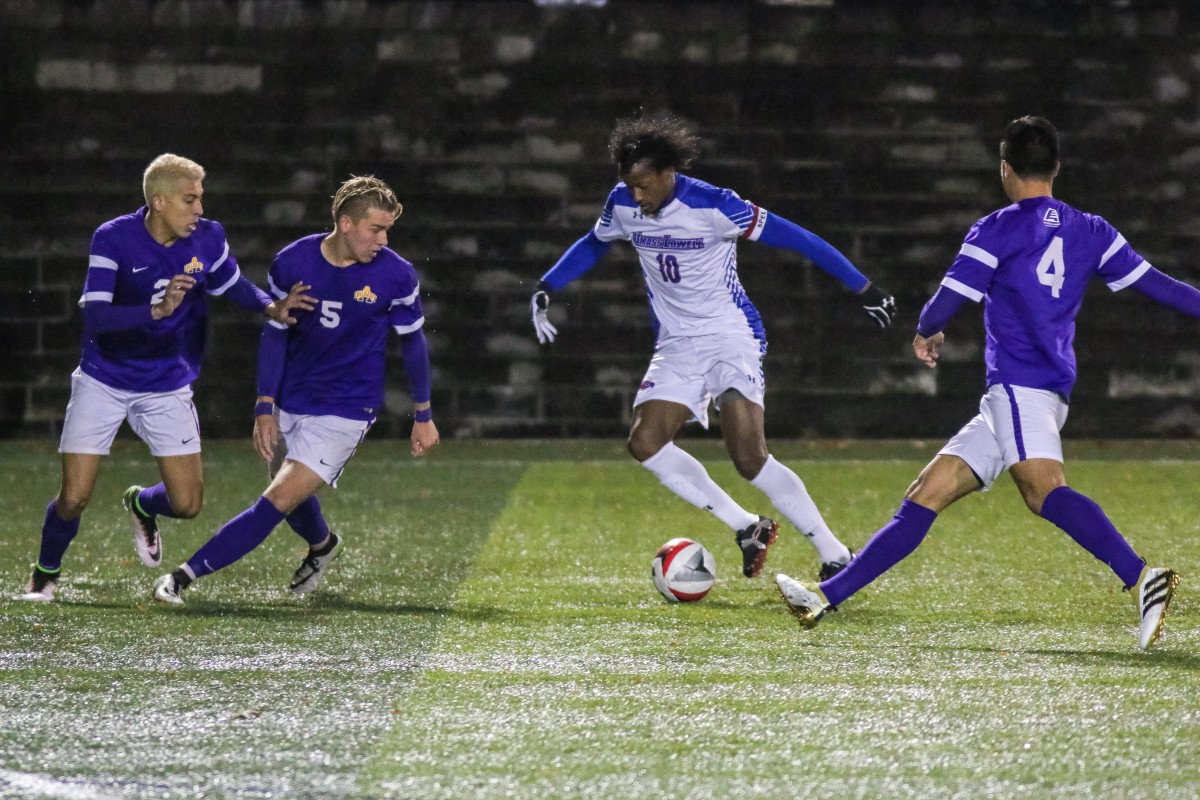 Wuilito Fernandes controls the ball while surrounded by a trio of Albany defenders. He would score his 10th goal of the season later in the first half.  (Matt Dwyer/Connector)

The River Hawks secured a 1-0 victory over the UAlbany Great Danes in a nail-biter at the Cushing Field Complex Saturday night, with UMass Lowell’s goal coming courtesy of Wulito Fernandes’s tenth of the season.

The stakes were high Saturday night at Cushing Field Complex. Both the River Hawks and Great Danes came into the match 3-1-1 in America East conference play this season. The competition was fierce with both teams aware the game would be incredibly important in deciding the division title.

“It was a great performance by the guys. Getting going, being able to dictate the tempo early on. Get that first half goal; you’re going to have to defend a bit. Especially at the end of the game. I thought our guys did a great job doing that,” said Coach Figueroa.

Starting out slow, with possession in their half, the River Hawks eventually began to make strides up front as well. UMass Lowell also subbed in sophomore goalkeeper Zach Rowell for starter Austin Kroll at the midpoint of the half. The River Hawks soon began to hunt for breakaway passes and crosses on offense. Several attempts were cut off by University of Albany, but eventually UMass Lowell broke through with a couple of shots on net.

“They play that back three, they’re tough, they’re organized. I give a lot of respect to that back line, but I think that our guys felt confident with them so we gave them a little bit of freedom to run at them,” said Coach Figueroa of the plan on offense Saturday.

UMass Lowell broke the scoreboard in the first half when freshman midfielder Dario Jovanovski connected with senior Wulito Fernandes. Fernandes deked out the defender off the high cross into the box and netted his shot to give the River Hawks a 1-0 lead.

“Every goal is a goal. I just try to score as much as I can. Every chance I have I just try to put it away. As long as the team is winning that’s all I care about,” said Fernandes of his game winning goal.

Despite rallying on offense, the Great Danes only managed to get through for one shot on net before the half.

Defense seemed to be the key focus for both teams after intermission, with several big takeaways and slide tackles on both sides of the pitch.

The second half began with both sides strong, coming at each other with energy. UMass Lowell provided a thrilling attempt in the box in which University of Albany sophomore goalkeeper Danny Vitiello came up with a big save. The Great Danes came back with a strong offensive presence but Lowell’s defense came up big, preventing most plays from making it through to Rowell.

UAlbany’s pressure grew as the minutes disappeared; urgency was present in every attempt, but the River Hawk defense stood tall, fighting off every corner and rush. With no shots registered in the second half for the University of Albany the game came to an end with the score unaltered.

UMass Lowell, now 4-1-1 in conference play, clinched a share in the America East 2016 regular season title Saturday night. Coming up against Hartford on Wednesday at Cushing Field, the River Hawks look to win out for a near perfect season and a solo division title.

“Recovery and regeneration… Taking care of our bodies has been number one priority between every single game,” said Coach Figueroa.