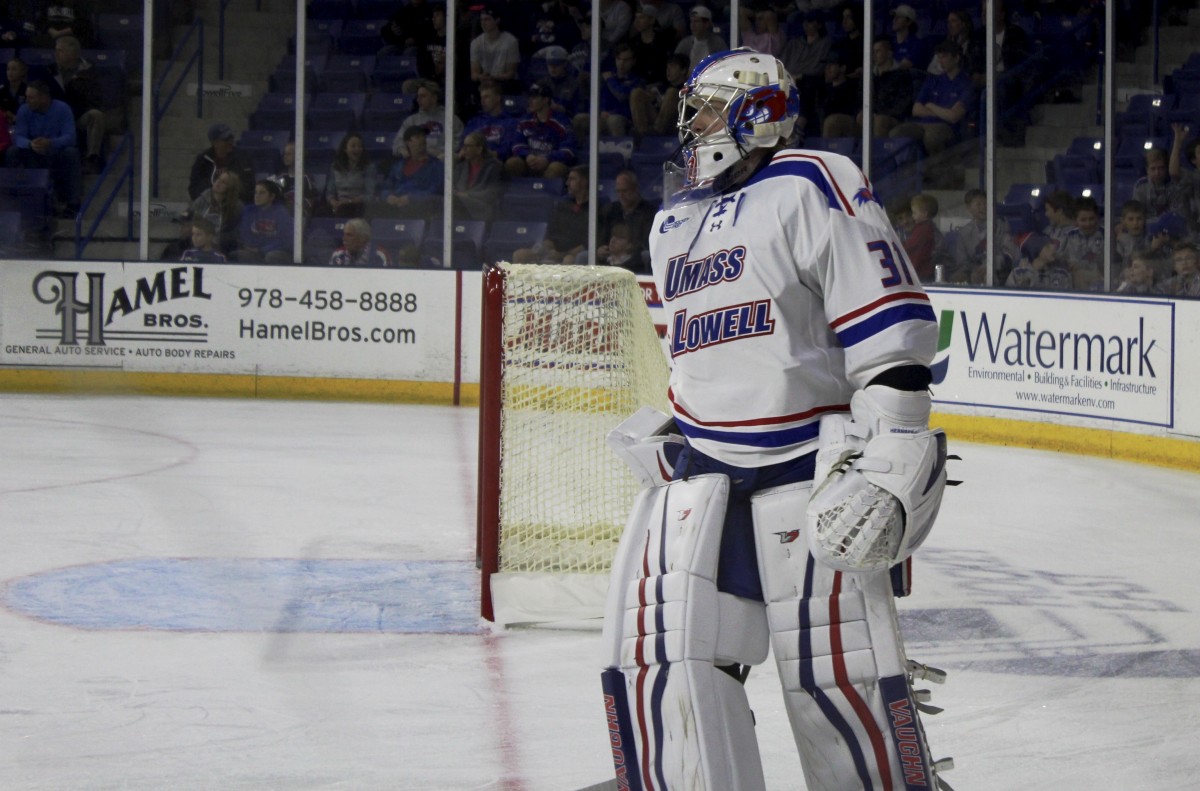 In an electrifying home opener, the No. 7 UMass Lowell River Hawks Men’s Ice Hockey team managed to weather a strong comeback by the No. 5 University of Minnesota Duluth Bulldogs and secure one point in their first tilt of the season.

Despite a hard-fought back-and-forth game and leading on the scoreboard for long stretches, the River Hawks were plagued with turnovers and eventually forced into sudden death overtime.

The game would have been ended with a UMass Lowell game-winning goal netted by junior forward C.J. Smith up close were it not for the referees calling the tally back for goaltender interference.

The first period saw one goal from River Hawk senior defenseman Dylan Zink (1). His one-timer from the point went top right off a pass from senior forward and assistant captain Joe Gambardella on the power play and brought the team into the first intermission leading 1-0.

“The momentum went our way in the second period because we started getting pucks deep,” said UMass Lowell Head Coach Norm Bazin. Although the River Hawks let up two goals in the second period, it seemed to be a period of play that they took hold of.

The team answered the Bulldogs’ first goal against almost immediately on a power play goal from Gambardella, his second point of the night, assisted by Mattias Göransson and C.J. Smith.

Gambardella boasted another goal in the same period off of a two-on-one opportunity created by a defensive interception on the part of C.J. Smith who received the helper.

The River Hawks took what appeared to be a decisive 4-1 lead late in the second when freshman defenseman Mattias Göransson scored his first career goal on a 5-on-3 power play. His wrist shot opportunity came as a result of good cycle in the offensive zone. The goal was assisted by junior defenseman and assistant captain Tyler Mueller and Smith, and was one of what would be six power play tallies total on the night.

It was at this point that University of Minnesota Duluth pulled starting goaltender Hunter Miska for Nick Deery. In front of a new goaltender the Bulldogs’ Karson Kuhlman’s individual effort to get his own rebound in front of the UMass Lowell net would result in a power play goal in the final two minutes of play.

The Bulldogs carried momentum from this late goal into the third where Kuhlman and Neal Pionk, the goal scorers to that point, would record their second points of the night to push UMass Lowell into overtime where the score would not change.

“I thought we didn’t manage the puck very well… I’ll watch them. We’ll improve that… It was one of those games where you’re giving up too many penalties and it slipped away on us, and that’s our fault.” said Coach Bazin, citing some of the difficulties the team faced throughout the game.

It was not all negatives. Both teams took too many penalties, UMass Lowell with 11 and Minnesota Duluth with 8. The River Hawks played a solid defensive system to kill 5 of those 8 penalties.

Christoffer Hernberg, who was the chosen starter for UMass Lowell after weeks of public scrutiny and hype, also turned away 39 shots.

“We’ll take the positive out of today, and we’ll channel maybe our frustrations into tomorrow… I liked our effort… Overall, the effort was there,” said UMass Lowell’s head coach in closing.

With the season officially underway, and another game against the University of Minnesota Duluth Saturday, October 8th, the UMass Lowell River Hawks appear to be off to a strong start with a long season ahead.